Brain-related illnesses represent a top unmet medical need globally. Two-billion individuals live with a brain or nervous system disorder, such as Alzheimer’s autism, cancer, epilepsy, depression and schizophrenia, including 100 million in the US, creating more than $2,000 billion in annual costs, and $1,300 billion in the US alone (report; “Neurotech Clusters, 2010”). A recent report pegged the costs at $1,000 billion in Europe alone, likely increasing the total.

Several start-ups are making headway in the development of innovative body area network (BAN) technologies which aim to bring relief to patients and practitioners in this sub-sector. Last week I featured Wave Technology Group’s mobile app for real-time seizure monitoring and BioSignal Group’s microEEG device for noninvasive EEG in an ambulatory setting. Today I will feature NeuroVigil and their iBrain Device for providing a “wireless window to the brain” to better diagnose and track brain-related illnesses.

The iBrain device is a portable, user friendly single-channel EEG device that is easy to use, comfortable, and portable, allowing for more efficient EEG data collection. Key features of the iBrain include a miniature electronics box attached to a light and flexible head harness and electrodes that can effortlessly be applied to the head during sleep. It also includes a rechargeable battery that provides hours of continuous recording, a USB port for simplified data transfer and battery charging to a computer, and provides days of recording storage. The device has HIPAA compliant security for easy transfer of data via the Internet. 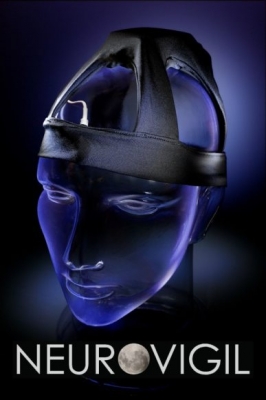 To make sense of all the data collected by the iBrain, NeuroVigil has developed the SPEARS Algorithm to provide rapid quantification, analysis, and classification of EEG data, mitigating the need for manual analysis by clinicians. According to the company’s website, the algorithm uses the dynamic range of sleep EEGs as a “wireless window into the brain”.

It appears NeuroVigil’s primary application will enable pharmaceutical companies and research institutes to use EEG recording to analyze drug efficacy and screen for biomarker data indicating neuro-therapeutics. The company has signed one deal of significance (all the way back in 2009) with pharmaceutical developer Roche, though the details of the deal were not disclosed. NeuroVigil announced a major collaboration with Stanford University to use the iBrain in a two-year sleep study on Autism.

In May, NeuroVigil announced a major first round of funding at a valuation “twice that of Google and Facebook at initial funding” and led by a “legendary industrialist and visionary”. Speculation puts this highly touted valuation at approximately $250M, which is a very big deal and probably the largest valuation earned by any mHealth start-up to date.

First Round Capital’s Dr. Howard Morgan, an angel investor in and adviser to NeuroVigil, said:

“I have followed Dr. Low’s work for several years, and am truly excited by the potential benefits now that he’s able to efficiently combine neuroscience, mathematics, computer science and wireless technology to build a large database of both healthy and other brain states. The ability to use the resulting brain maps in searching for biomarkers could lead to real breakthroughs in early diagnosis of diseases. And having a history of one’s own brain patterns over a significant length of time, something that iBrain makes feasible, can help us understand the neurological changes we go through,”

NeuroVigil has built an impressive team of neurological thought leaders from leading US research institutes, including Nobel Laureate Dr. Roger Guillemin, President Emeritus of the Salk Institute, where NeuroVigil founder Philip Low first developed the technology behind the company’s products. Dr Guillemin is quoted in the press release announcing the company’s first round of funding as saying,

“Philip discovered a fundamentally new way to assess brain activity, non-invasively, and rapidly, using a single channel EEG. The technology is superb for it allows one to see signals which could only be detected with electrodes implanted in the brain, or at the very least on the surface of the brain. This technology is having tremendous impact.”

One obstacle the company needs to overcome from a business perspective if it hopes to directly market its technology to patients will be meeting the expectations of payer groups before these groups will even consider reimbursing patients and clinicians for using the iBrain Device. The technology’s reliance on only one-channel of EEG data does not meet the minimum standards of any payer group reimbursement policy for ambulatory EEG diagnostic services, which means their products/services are unlikely to earn approval for reimbursement from payer groups . More critically, clinicians will only begin prescribing or recommending the iBrain Device to their patients if they stand to be paid to do so because legacy systems for EEG technology, despite their many deficiencies, have long been recognized and reimbursed for by payer groups.

There has been little new noise out of the company since they announced their major round of funding in May, but with the amount of capital they have in the bank I suspect the next time they show up on the radar it will be a BIG blip.