The App Store concept is one which has been instrumental in the success of the iOS ecosystem. The tagline ‘There’s an app for that’ has allowed iPods, iPhones and iPads capable of any task bounded only by imagination and hardware to be created.

The introduction of the Mac App Store heralded a new era in how users obtain and manage software. Apple has been pushing the concept forcefully, initially only offering their latest operating system, OSX Lion, via the App Store.

Here at iMedicalApps, we were very excited about the possibilities that lay ahead when it launched on 1/6/2011. Since then, however, there have been a significant shortage of medical apps.

Many of the apps that were initially placed in the medical category did not belong there, instead belonging in the health and fitness section. Given the relative success of the medical category in the iTunes App store, it is surprising that it has taken so long to develop this category. At launch there were only 13 apps available and currently there are only 116, many of which are still incorrectly categorized.

The key question, then, is whether or not–10 months on–the medical section of the Mac App Store is any good and worth developing.

The answer to this is not straightforward. I believe that some aspects of the medical app ecosystem that have been so successful on mobile devices will transfer well to the Mac App Store, although there are also a significant number that won’t. There are a number of reasons for this: 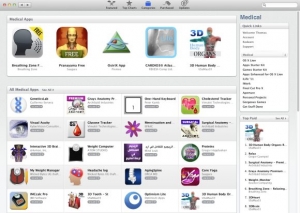 Despite these obstacles, there are a number of areas the Mac App Store may succeed, one being EMR software. The Mac App store is ideal for easy installation of EMR software across a range of computers and the ability to update in a straightforward fashion is certainly very attractive. Another exception is patient centered apps such as those that track and monitor health e.g. weight, blood pressure, glucose or provide evidence based information regarding a specific disease (ala carb counting with Lenny).

Another area that has the potential to be successful is electronic textbooks. We have already discussed whether electronic textbooks are the way forward and it would be an incredible feature if you bought a (physical) textbook and received a code with it that allowed you to download an app version of the book. This already happens with StudentConsult (a branch of Elsevier) whereby purchasing a textbook allows access to an electronic version on the web. There are many flaws with this model which are better discussed in a later post.

There are a number of positives and negatives associated with the Mac App Store. The low barriers of entry discussed here mean that there are significant possibilities for medical app development on the Mac. I feel that the future of the category lies with EMR software, patient health tracking software and medical references. However, the major hurdle to overcome is the lack of mobility associated with apps on a desktop.

On a different note, one area which has received a lot of speculation is whether future versions of the mac operating system will be able to run iOS apps. If this were the case, it would be interesting to study the use and uptake of mobile apps on desktop computers. For now though, the Mac App Store is a fairly limited resource for healthcare professionals and patients alike and it remains to be seen whether this will change in the future.