Medical and health related apps have been a staple of the mobile ecosystem for as long as smartphones have been around. Now that the FDA wants to regulate them, the long process for obtaining FDA clearance means health-related apps and attachments are only now starting to appear in significant numbers.

Avid readers of our site know that the imedicalapps team has covered this transition from the very beginning, as can be seen here , here and here.

Mobisante is one such company that has just recently received FDA clearnance. Mobisante’s ultrasound device, which goes on sale in October, is part of a new wave of smartphone apps and accompanying attachments in the emerging mobile health/medical market. The device is able to convert a smartphone into a small, portable, and accurate ultrasound machine. 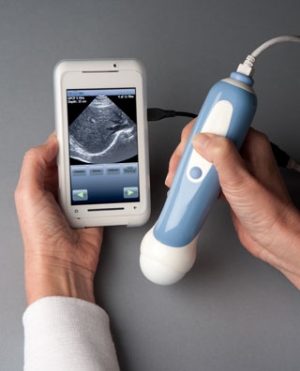 “In the past eight months, products that turn a phone into a blood pressure monitoring cuff, a CT-scan viewer, and other health-care gadgets have received Food and Drug Administration clearance. The market is tiny but expected to grow rapidly: By 2015, 30 percent of the world’s smartphone users will be using mobile health products, up from 5 percent today, estimates mobile market consultancy research2guidance. “Health care will be fundamentally different than it used to be,” says Bakul Patel, a policy adviser at the FDA.”

In fact, pioneering app developers have already done some of the initial groundwork for app approval. According to the article, Mobisante, for instance, had to prove to the FDA that smartphones’ digital screens were comparable to the screens on existing ultrasound machines–work that future applicants may not have to replicate.

This trend is not going away, and the pace of clearance approval should increase in 2012 when the official guidelines and processes will be released. This means that the cost and approval time may shrink when the FDA clearly explains which mobile health devices and apps fall under its jurisdiction, and how it will regulate them.

Potential customers including hospitals and small provider practicess will have greater confidence in knowing they are purchasing the correct apps and devices for their specific needs. This may even lead to an acceleration of their buying decisions once they know which apps are recommended by the FDA.

Mobile medical apps have the potential of also cutting down on total costs.

“One of the promises of mobile health products is that, by building on existing products such as Apple’s iPhone, they can perform the same function as high-end hospital gear for a fraction of the price. Mobisante’s ultrasound attachment, for example, costs $7,495. The images aren’t the highest quality available, but a top-of-the-line ultrasound machine costs as much as $100,000, and Mobisante’s device is ‘easily the best bang for your buck,’ says Jason C. Wagner, an emergency department doctor in St. Louis, who reviewed it for Emergency Physicians Monthly. “

Additionally, medical apps have reached a point ( as you are well aware) where they are not just curious oddities, but are now acceptable to use in certain patient care settings.

“By reducing costs for insurers and medical providers, mobile health-focused startups hope to snag a slice of the $273 billion medical equipment and supplies market, currently dominated by conglomerates such as General Electric (GE) and Philips (PHG). ‘Big companies of tomorrow are the small companies of today,’ says Cédric Hutchings, chief executive officer of Withings, which makes a $129 blood pressure monitoring cuff that attaches to iPhones.”

This creates an investment opportunity for companies willing to take the risk and that have the necessary foresight to see what this mobile market can become.

“Investors and potential acquirers already are eyeing the market. In September, Sandy Spring (Md.)-based venture capital firm Hickory Ridge Group launched a $50 million fund focused on new health technologies, including mobile health products. ‘We are looking very closely at some of these start-ups,’ says Paul Coss, a director for wireless technologies at Philips Healthcare. ‘There’s some clever innovation happening there.’ “

For further articles related to the FDA draft guidelines, check out the imedicalapps team initial assessement here and here.