As tablet devices become an increasingly accepted device for day-to-day computing needs, their appeal to enterprise continues to grow. Such is the case with the United States Army (admittedly not an organization I often think of as an “enterprise”), who recently updated their Commander’s Guide to MC4 app that can be accessed through military personnel’s iPhone, iPod Touch, iPad and various Android devices.

Medical Communications for Combat Casualty Care (MC4) is, in some ways, analogous to a hospital’s IT department – if that IT department had to manage care delivered everywhere from Tora Bora to Charleston.

Given that scope, the MC4 has recognized that mobile technology will drive their care delivery and management model. We have previously reported on the potential for tablet devices to help army medics especially as related to electronic medical records . This is the tip of the iceburg, as the functionality of tablet devices is quickly expanding in scope, and consequently their ability to directly impact soldier’s lives.

This is the updated version of the MC4 guide. The initial version was released in December 2009 and was, according to Lt. Col. Kevin Werthmann, former health information systems officer for the 101st Airborne Division in Afghanistan,”a tremendous resource and a blue print for success.”

The initial version of the MC4 guide was only available as a PDF, on special computers connected to the Army Knowledge Online network. Now, this app allows for clinical documentation, review of patient data, access to reference and decision support tools, and more. The MC4 even boasts that data collected will integrate when the soldiers transition to care in the VA system – an impressive level of integration when one considers the otherwise heavily fragmented health IT environment.

“Now, the mobile medical force can use the ATN2GO app on their personal or approved iPhone, iPod Touch, iPad or Android device to access best practices, guidelines and procedures for using MC4 in the field. Since August 2010, 3,863 Apple and 2,924 Android users have downloaded ATN2GO.” 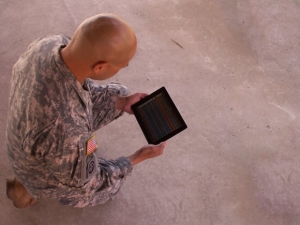 Deployable staff including medics, nurses and commanders use MC4 to document and track patient care, digitally manage and inventory medical supplies and monitor health in the combat zone.

“In addition to offering mobile access, version 2.0 the MC4 guide focuses more on specific guidance and need-to-know information, reducing the volume by 60 percent, making data retrieval fast and easy. The app allows users to create direct links to procedures specific to their specialty. The guide also synchronizes users to reference materials not included in the guide, such as links to updated checklists, policies, presentations and step-by-step procedures.”

The new guide also ensures a continuous and systematic approach to supporting the creation and secure transmission of EMRs and automated maintenance of medical supplies. 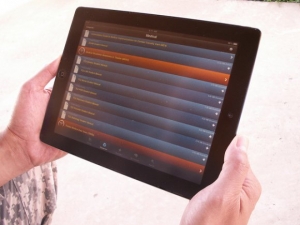 As the press release from the MC4 on this app states,

“Mobile devices are driving the Army’s training delivery model,” said Lt. Col. William Geesey, MC4 product manager. “By empowering deployable medical forces with the ability to get answers to questions on the fly, we are in effect improving their ability to make informed decisions on the health care delivered to Soldiers in theater.”