A few months ago we started receiving e-mails from developers stating Apple was reaching out to them and was going to put certain medical apps from the main iOS store into specific categories in iTunes.

Obviously, we were excited to hear this, as we’ve written before how the Medical Category in the iOS store is cluttered with apps that health care professionals don’t need.

Unfortunately, with the rollout of the “Apps for Healthcare Professionals” category in iTunes, we’ve been more disappointed than excited. The imedicalapps team was expecting apps to be separated by specialities — or at least by broad medical professionals, such as “nursing”, “EMS”, and “physician centered” — but this was not the case.  Apart from the issue with sub-categories, Apple missed the mark with not only the apps that were included, but also the extremely useful apps they excluded.

To be clear, the categorization by Apple is not a complete  failure — many of the apps they have listed have been reviewed by the iMedicalApps team. However, to those who aren’t medical professionals, it might seem like the compilation of apps listed provides good value.

Apple has 6 medical categories they have defined in the “Apps for Healthcare Professionals” section: Reference, Education, EMR & Patient monitoring, Imaging, Point of Care, and Personal Care. Although Apple doesn’t provide a definition of each category within the iOS store, we will specifically define these categories for you based on an email we obtained that was sent out to app developers.

We will delve into Apple’s definition of the 6 medical categories — and give our analysis of how they did with each.

Physicians sort through an overwhelming amount of information in the course of diagnosing and treating patients. So having medical information available on demand, at any point throughout the day, is absolutely essential. Mobile access to this vital information must be intuitive, quick, and easy to interact with and view. Clinical reference apps on iOS deliver all this and more.

Great job on picking NEJM This week, Medscape, Epocrates, Micromedex, AHRQ ePSS, and Echocardiology Atlas. We’ve actually reviewed all these apps, and many of them are in our top 20 free iPhone medical apps list.

Unfortunately, Apple put WebMD and DocBookMD in this category as well. If a health care provider is using WebMD as a reference tool, they probably haven’t had any medical training — the app is clearly meant for patients. DocBookMD, although having potential to be used by medical professionals, is not a medical reference app — it’s an app that helps you look up other healthcare professionals and local pharmacies.

Education Apps: This category of apps give both practicing physicians and medical students access to the educational content they need, even when they’re on the go.

They did include Netter’s Anatomy Flashcards — the best app in this category. They also put 3 of 3D4Medical.com’s 3D anatomy apps, which aren’t our favorite anatomy apps, but still solid choices for the category.

There are more than 30 anatomy apps we’ve reviewed on iMedicalApps, and we’re shocked more didn’t make this category, as we find them superior to the apps mentioned by Apple. For physicians in this category, MedPage Today Mobile and Epocrates CME were added for CME learning.

Apple could have done so much more with this section, but what is worrisome is the The Step 1 app they recommend, USMLERx Step 1. It was last updated almost one year ago, and has flashcards that are 2 years old! We’ve reviewed over 10 USMLE question bank apps on iMedicalApps that are far superior to the one mentioned by Apple.

Electronic Health Records (EHR or EMR). Stimulus funding from the Federal Government for hospitals and private practice to move to electronic records is driving a lot of development and innovation in this space. Patient monitoring apps are changing the paradigm of how information is received by physicians.

We’ve looked at the EMR category in the iOS section on iMedicalApps, but much of this is dependent on the electronic medical record (EMR) used by your hospital or your practice. Not much else to say here.

Allows physicians to connect to hospital PACS systems to view DICOM images on the iPhone and iPad – anytime – anywhere.

The all important Mobile MIM was included in this section, a good sign. However, based on Apple’s own definition, they did not correctly place Radiopaedia and the CTisus iQuiz apps. These aren’t DICOM image viewing apps.

Also, arguably the two most popular DICOM apps behind Mobile MIM, OsiriX and Resolution MD were not included.

For physicians to use with their patients at the bedside.

Apple completely missed the mark here, and this category alone was the inspiration for this article. At iMedicalApps we have written extensively on how Point of Care apps can be useful for patients, namely using the iPhone and iPad to help patients get a better understanding of their disease pathology.

The only apps we might see ourselves using from Apple’s list are the two medical translation apps mentioned in this category, Pocket Medical Spanish and Medical French. Apps such as Cancer.Net Mobile are fantastic, but for patient use exclusively, not for physician use at the bedside.

Some of the biggest omissions are Blausen Human Atas and 3D brain. But there are plenty of other apps we have reviewed that did not make this category.

Not much to say here, as Apple themselves have stated these apps are for consumers, not necessarily for medical professionals to use for patient care. 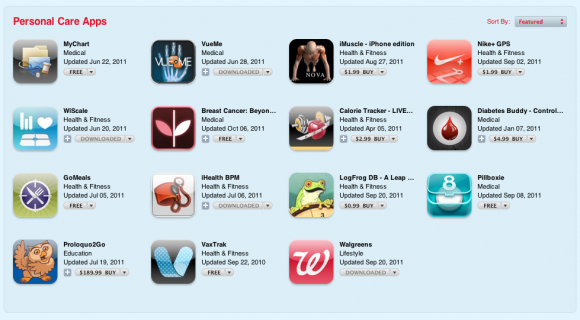 Overall, Apple had a great idea  to try and categorize medical apps in the App Store. Unfortunately, they have not categorized many of the apps correctly and have excluded a plethora of quality medical apps.

Clearly, there is no way we would have expected Apple to include all the key medical apps per category, but the iMedicalApps team was most disappointed by the inclusion of subpar apps.  Apps such as Pocket Medical Spanish, which has a bad iTunes rating, were included in the Apple list, while a simple Google search would have shown MediBabble as the best medical translation app by a wide margin.

Consumers and medical professionals might rely on the list that Apple has derived as a gold standard and guide to the best medical apps for health care professionals — unfortunate.