[Ed. A new version of the app has been released. Check out the updated review here.]

As I have been told by many interns and residents, the jump from being a medical student to being an intern is something that cannot be explained, only experienced. As much as I try to understand and demystify, it remains both a daunting and exciting prospect.

The Surgical Intern Survival Guide by Drs. Dangleben and Garza attempts to ease the learning curve by answering common concerns and questions for green surgical interns in an easy to use guide. The app is available for iPhone and iPod Touch, and as the title suggests, would be best utilized by surgical interns.

The app opens into a table of contents with topics ranging from Common Floor Calls, Operative Dictations, Medications, and Nutrition. These broad categories further open up into subtopics. The first two categories provide general advice on how to handle calls and floors. Perhaps the most useful ones would be the Common Floor Calls, with Operative Dictations and Documentation categories providing added benefit for interns. 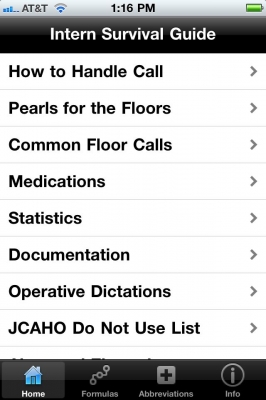 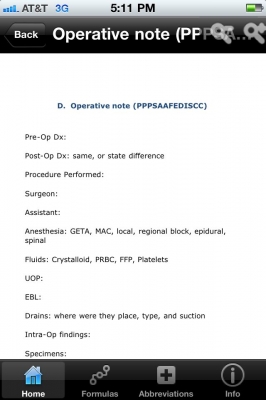 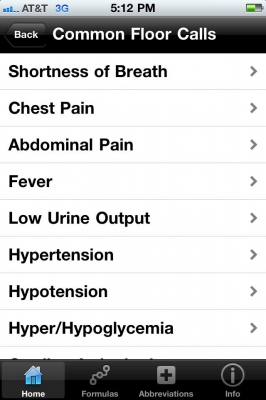 The formulas tab presents a list of 10 calculations, criteria, and formulas of notable use in surgical patients. However, beyond simply listing the formulas, there is very little utility. The abbreviations tab alphabetically lists common abbreviations that are encountered in the surgical realms. 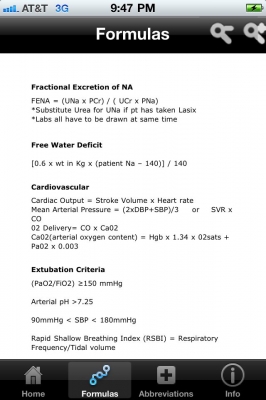 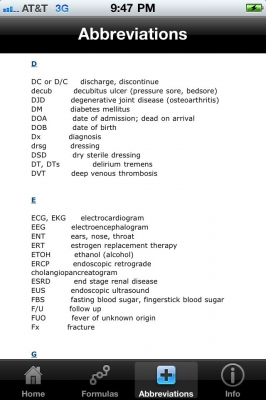 However, the app does have some notable flaws. Most hindering to its utility is the formatting, the poor spacing is present throughout the app and is minimally improved by the in-app zoom feature or even the iOS screen zooms. The lack of suggested resources, websites, or references for further aid is a deficit that could have added much value. Also including additional formulas or criteria would have been just as beneficial. 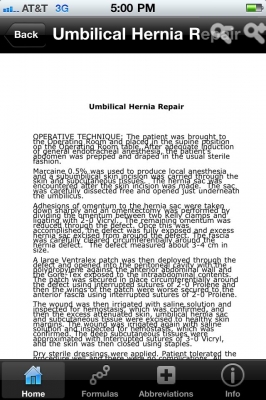 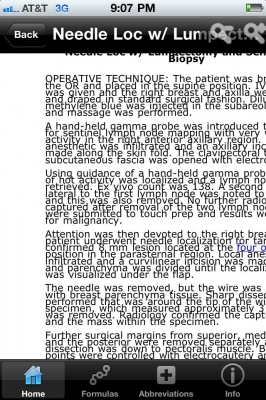