“What if walking to lunch, taking the stairs, and walking our dogs could feel like play?”

This is a powerful question and one that drove the co-founders of Striiv to think beyond the native app to develop an “always on” technology solution to make healthy life choices rewarding and fun.

Striiv is a new fitness device that doubles as the coolest keychain I have ever seen and takes the gamification of health to a new level. The device counts every step users take, with distinction between steps taken walking, running and up/down stairs and uses this data combined with pre-programmed interactive games and challenges to motivate users to make small changes in their daily routine to improve their personal fitness.

Read on to learn how it works and the really clever idea of combining gaming, personal charity and exercise. 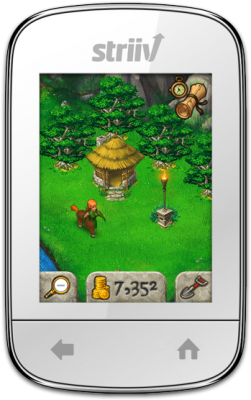 The initial game that will come loaded on the device is called MyLand, which gradually builds an elaborate island paradise which is literally filled with new wildlife the more users move around. 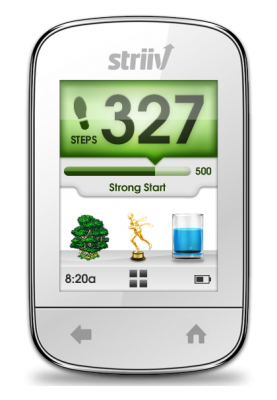 The company’s so-called ‘secret sauce’ is their proprietary ‘TruMotion’ technology, which runs in the background on the device to sense the subtle distinctions in personal activity. There is also a web-based component which is connected via a USB port plug-in and used to access new games, charities and share activity across social networks. 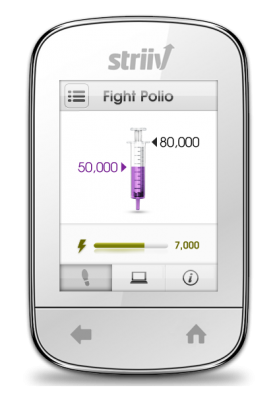 I think the most intriguing element of the device is the incorporation of rewards via donations to third party charities based on the continuous success achieving targeted milestones. This is a unique approach to creating incentives and motivating users to maintain their healthy lifestyle choices and I think it will resonate with users, particularly women. Initially the company is partnering with GlobalGiving to donate clean water to children in South Africa or a polio vaccine to a child in India.

According to TechCrunch, Striiv has raised $6 million from iD Ventures and a number of angel investors.

The device costs $99 and is slated to be shipped on 10/15, but can be reserved in advance on the companies website. The company has also hinted the device will be available at several high profile retail locations around the country.