In many aspects of healthcare, physicians and other providers are often in the passenger seat rather than the drivers seat. When it comes to medical apps, however, we have seen a large number of physicians who recognized a need and came up with an app to solve it. A recent contest hosted by the American Medical Association (AMA) seeks to promote that kind of initiative.

Dubbed the AMA App Challenge, the contest challenges physicians, residents and medical students alike to come up with an iOS app that will benefit the medical community. Thus far, the contest has selected a total of 10 ideas, 5 from the physician category and 5 from the resident/medical student category. Out of the many entries, only one from each category will be allowed to present their idea at an awards ceremony in New Orleans. The winning ideas will also be refined and developed into a workable app by AMA developers.

“Two Grand Prize winner packages will be awarded, one to a physician and one to a resident/fellow or medical student. Each Grand Prize package will consist of the following (1): A $1,500 Apple Store Gift Card, (2) A $1,000 American Express Gift Card; (3): Authorship credit in the App if it is published by the AMA; (4): A three-day/two-night trip for two to New Orleans, LA, on AMA-specified dates in November 2011, to attend the award ceremony.”

One of the finalists, Dr. Pond Kelemen, has an idea of using an app to assess patient’s breast cancer risks. 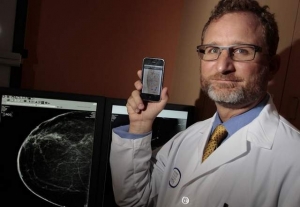 “It’s not just simply breast surgeons, but it’s gynecologists, internists, anyone who is dealing with women on the frontline of health care can use this,” said Kelemen, a breast surgeon at the Ashikari Breast Center at St. John’s Riverside Hospital, Dobbs Ferry Pavilion and Hudson Valley Hospital Center in Cortlandt.”

Dr. Kelemen’s idea would combine numerous calculations to assess several different risks pertaining to breast cancer, as well as integrating clinical recommendations into the app’s output. What seems to make this app different than other clinical calculators is that it takes a single set of data points and applies them to several formulas, generating a range of risk assessments as well as care recommendations – in short, making the leap from a simple calculator to decision support.

“A woman would come in, and you go to the app, and plug in her clinical information — age, family history, et cetera — and it would tell us if she would qualify for aggressive monitoring with MRI, medication to decrease the risk, or whether it makes sense to do genetic testing, he said. The app would show doctors percentages for the patient’s chances of having a genetic mutation and of developing breast cancer in five years and in her lifetime.”

One interesting feature of the apps that have been submitted is that they are so clearly tied to specific day-to-day challenges. For example, Duty Hours is intended to improve compliance with ACGME residency compliance. Mobile Surgery Card lets surgeons create and maintain lists of preferred equipment for different surgeries. Overall, the apps that have gained a top-10 slot are generally targeted at needs that the submitters likely face on a day-to-day basis.

Two exceptions are the Disaster Preparedness app and the Physician Advocacy app. The former seeks to provide education about disaster management but also seems to hint at an application to real-time disaster management with alerts about disasters, an idea that could certainly be expanded significantly. The Physician Advocacy app seems to take more of a social media approach to encouraging providers to engage in policy making and, with the growth seen in other physician social media venues, has interesting potential.

We are certainly not endorsing on app over another – that’s for you all to decide. Rather, given that this is a list of app ideas from physicians (mostly), it gives us an interesting window into how our colleagues are thinking about mobile health and medical apps.

Voting is still open to registered members of the AMA through September 30th and can be found here.