Medical services are growing in popularity due to Groupon and mobile phones, ethical issues arise

LivingSocial and Groupon are not just strange words anymore to most consumers. They are the backbone of a new frontier of daily deal websites which sell coupons and discounted gift certificates which are redeemable at local businesses.

In fact, Groupon turned down a $6 billion buyout from Google in lieu of its own IPO, which has yet to occur. In June, Groupon made the filings to go public and will trade under the stock symbol GRPN.

The popularity of these daily deal sites is not limited to free yoga classes and restaurant deals, as the medical community is jumping on board with deals ranging from cheap dental cleanings, to laser eye surgery.

“In the first quarter of 2011, there were more than 2,500 medical, health and dental offers published on daily deal sites in the U.S. — an eight-fold jump over the 300 offered during the same period a year ago, according to Dan Hess, CEO and co-founder of Local Offer Network, a daily deal aggregator. That’s a   startling increase, even compared to the rapid growth of the sites themselves,   which had a five-fold increase total deal volume over the first quarter. And, says Jack Vonder Heide, president of Technology Briefing Centers, “We’re seeing more of them coming onto the market every week.”

In fact, the smartphone has helped drive the growth of this market, since notifications of daily deals, or “daily deal alerts” are sent to your phone and the actual codes can be redeemed directly off of the device. A quick search of the groupon website for my local area brought up a 50% discount on liposuction and an 83% discount on prescription glasses! 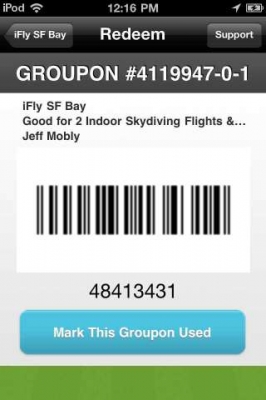 While these deals are appealing to consumers, some medical organizations believe that the wrong message is being conveyed.

“Consumers may pay too much attention to the low prices and not enough to the  quality of care or the provider’s track record, says Greg Sterling, a San-Francisco-based Internet analyst with Opus Research. And the “limited-time only” nature of daily deal sites doesn’t encourage measured, thoughtful decision making, adds Malcolm Z. Roth, president of the American Society of Plastic Surgeons. “You shouldn’t be doing procedures on a whim,” he says.”

The detraction is related to the fear that patients will seek out treatment from places that give them the best deal regardless of the actual quality of the service. While unscrupulous businesses may try to pull the wool over some unsuspecting consumer’s eyes, for their part, the daily deal sites contend a screening process occurs.

“Maire Griffin, director of communications for Living Social, says the services they offer are minimally invasive and mostly outpatient. “We do  everything in our power to connect our members with reputable merchants with the highest ethical standards,” she says. Groupon spokeswoman Julie Mossler says   every merchant goes through “at least eight rounds” of checking before they are placed on the site. Whitney Crisp, director of business development and sales   for Sharing Spree, also says the site only uses qualified doctors.”