In July, Epocrates released Epocrates EHR, an electronic health record system designed for smaller clinic-based practices. It goes without saying that Epocrates is an industry leader in mobile medical apps, and their successful IPO speaks to the potential their market position holds.

With Epocrates EHR, the company enters a highly competitive industry with a focus on a niche that has already proven itself interested in alternatives to the standard industry behemoths. With over a million physicians using their products, they certainly have a lot of potential.

Epocrates recently gave iMedicalApps a glimpse into their EHR and provided insight into future innovations that will soon be added. Here, we review what we saw and what we learned. Does Epocrates EHR have what it takes to extend their market dominance into the all-important industry of electronic medical records?

What We Got to See:

One of the largest selling points of the Epocrates EHR is that it was designed from the ground up by physicians, for physicians. Dr. Tom Giannulli, a small practice internist who has an impressive resume in medical technology (including being the CEO of the Caretools, who designed the first iPhone-based EMR), led the development team and personally demonstrated the functionality behind Epocrates EHR.

As the demo took place over conference call and screencast, it’s important to mention that we were not able to actually do a hands-on review of the product. However, the Epocrates team graciously allowed us to ask questions at any time and assured us that the real-life use of the product would resemble what we were shown. After the demonstration, we felt we were able to get a solid grasp of the functionality and flow of their product.

The rollout strategy for Epocrates EHR includes a multi-phase release schedule, with new and significant features being rolled out over the coming months. The current product is intended for smaller clinic-based practices, generally consisting of up to ten doctors.

Even in its current phase of release, the Epocrates EHR does not skimp on features. Taken from their product website, here are the current features that were demonstrated for us:

The Epocrates EHR is priced very competitively, at an Early Adopter price of $179/month per clinician (Physician, PA, or NP’s). After March 31, 2012, the pricing will increase to standard rates at $359/month/clinician. It’s worth noting that this pricing does NOT include Epocrates PM, powered by Nuesoft, which is the accompanying software that addresses practice management, including patient registration/scheduling, medical billing, etc. Epocrates PM will cost $200/month/clinician.

At its core, the Epocrates EHR is a web-based, SaaS (Software as a Service) system. In this sense, it resembles other Web 2.0 services like Gmail that run inside a web browser. This brings many notable advantages, including the fact that having expensive hardware becomes less of an issue. The service should run effectively on any Mac or PC running a recent web browser like Safari, Internet Explorer, Chrome, or Firefox. This also makes initial setup much easier as there is no hardware or software that needs to be installed or configured in the office.

Also, another advantage of being web-based is that data is heavily encrypted and backed up in the cloud. Since patient data will not be stored directly on site in your office, leaving patient files unencrypted won’t be a concern. Also, the data will be backed up in multiple Epocrates-maintained data centers throughout the country, so patient records will not be susceptible to disasters, like flooding, theft, or fires. Lastly, as a result of being based in the cloud, the Epocrates EHR is accessible from any computer, including computers at home, or laptops brought from home. This allows for the easy addition of new workstations to the office or the reviewing of files from home. 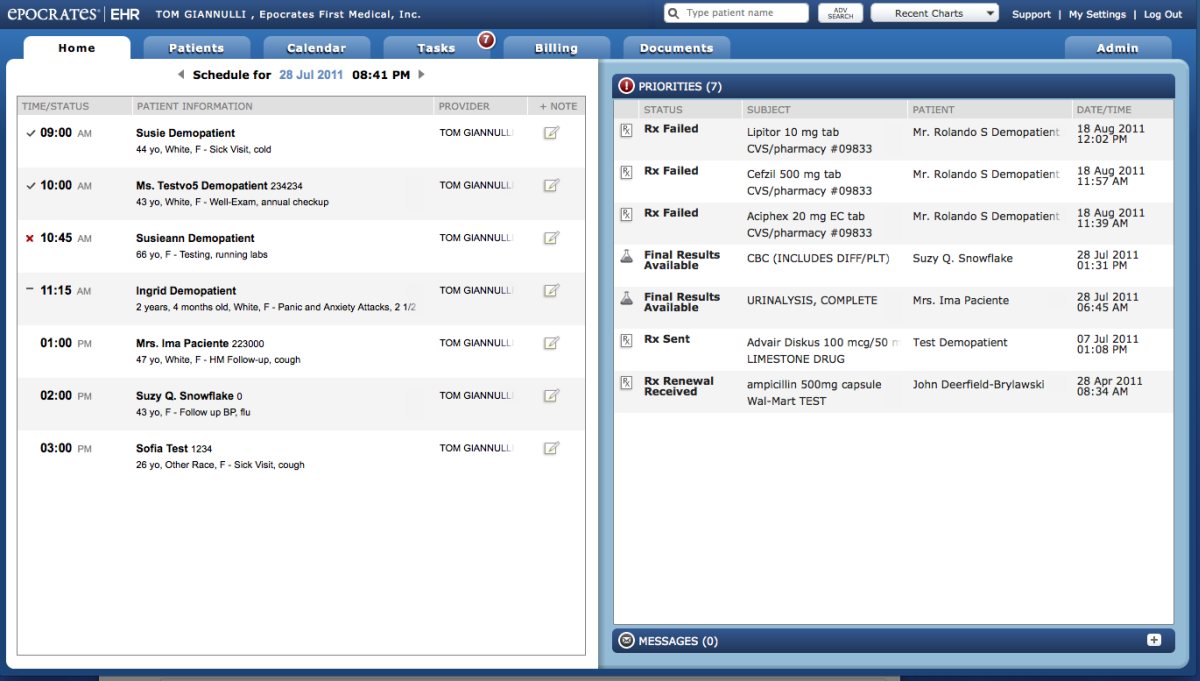 At iMedicalApps, the importance of User Interface (UI) design cannot be stressed enough. User Interface is key to the overall experience and workflow of any medical software, and this is where many products really frustrate and alienate clinicians and staff. Thankfully, the approach taken by the Epocrates development team hits the sweet spot combining simplicity, intuitiveness, and complex functionality. Functioning as a web app already provides a healthy dose of simplicity, and it avoids the archaic interfaces of older, legacy Windows-based software. I also appreciated the inclusion of a simple horizontal navigation bar at the top of the screen, and the omission of a persistent left column vertical navigation bar, which is found in some competitors. For one, this simplifies navigation and prevents the need for complex sequences of clicks to access certain menus. This also allows the primary screen area to span the entire horizontal width of the screen, which is especially helpful for smaller monitors and lower-resolution screens often found in clinics.

Particularly helpful is the initial home screen (pictured above), which intuitively lays out the clinic schedule on the left and the list of to-do’s (such as med refill requests and lab reviews) on the right. The development team went out of their way to streamline the workflow and prevent “alert fatigue,” which often occurs with competing products when users have so many warnings and dialog boxes to click through that they begin to ignore their contents. Such attention to detail goes a long way in improving the overall user experience.

Along with User Interface, the creation and viewing of patient encounter notes holds special significance to medial staff as it directly effects the bulk of their practice. Along with free text input, there are 3 tools provided to assist in automating note creation, two of which are in development and not yet available.

The current automation method utilizes the use of customized templates that focus around problems highlighted in the problem list (pictured above). For example, if the patient presents with a cough, navigating a series of pop-up menus and checkboxes directly relevant to cough are easily accessible and will highlight pertinent positives and negatives in the patient note. We were particularly fond of the final versions of the notes that were generated with these templates. In my experience, using templates often creates wordy sentences that are difficult to quickly navigate at a glance. Epocrates EHR avoids this by simplifying the final note with short phrases such as: “(+) fever, (-) chills.”

Future updates to the program plan on integrating voice-to-text transcription using the Nuance Speech Recognition engine. We were not able to see these features, and look forward to their release. 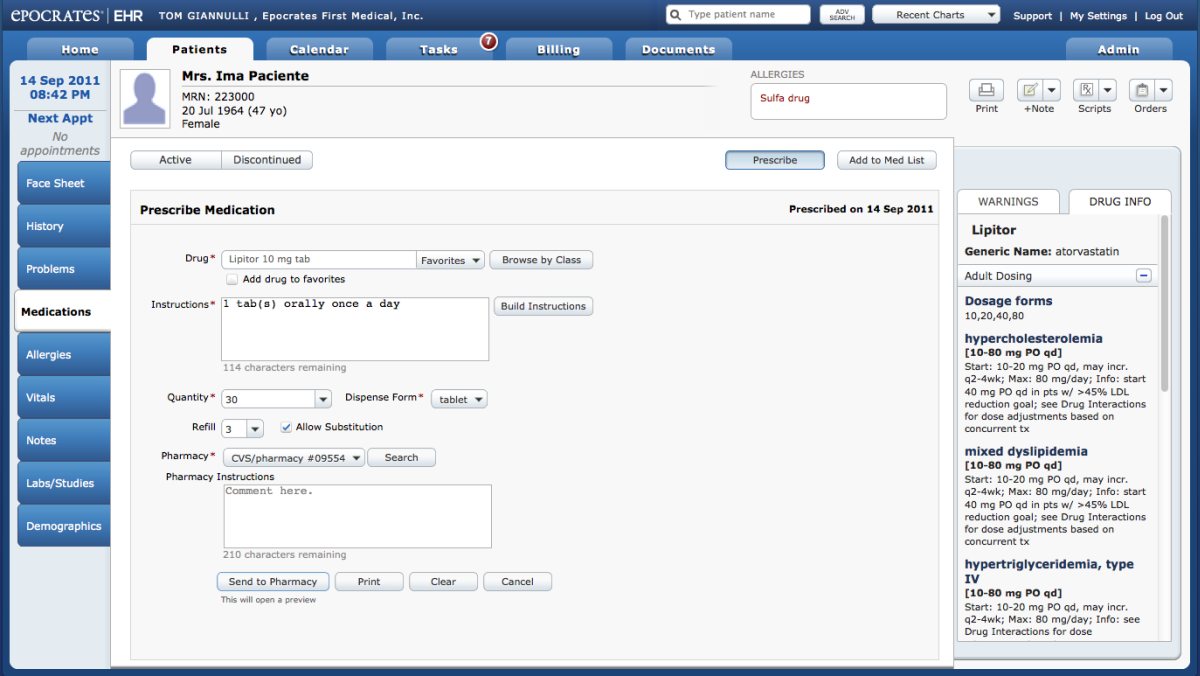 The Epocrates Mobile App is most widely used for its medication prescribing database and guidelines, and this database is seamlessly integrated into the ePrescribe workflow. When the physician enters the electronic medication prescriptions, the corresponding Epocrates drug information is displayed on a small window pane along the right edge of the screen. Wielding this trusted database in this manner is a major advantage to this service.
Likewise, the Epocrates EHR allows for the simple entry and retrieval of patient labs. Arrangements have already been made with major medical diagnostic laboratories, including Quest Diagnostics and LabCorp, allowing for automatic viewing of patient lab results.

As mentioned earlier in the app, the Epocrates team is committed to upgrading and enhancing their EHR service. Soonest to arrive is a mobile app for the iPhone that is planned for release over the next several weeks. This app would be a simplified interface for the EHR service that is more focused on the basic tasks for the physician, such as viewing schedules, viewing patient charts, writing prescriptions. For more thorough chart dissection or encounter note modification, clinicians should be able to access their EHR from any web-connected computer, as the data is stored on Epocrates’ own remote servers.

Another significant feature is planned with the arrival of the iPad app, which would allow the clinician to access all of the complex features of the service right from their iPad. This would allow for clinicians to carry out the encounter simply from their iPad, and holds a lot of promise for drastically simplifying the work flow and allowing for more face-to-face interaction with the patient. Also, the development team told us that the iPad app would allow for some off-line syncing of data, and would be able to accommodate small interruptions in internet connectivity.
The last important feature in development that the Epocrates team was able to share with us was the inclusion of Nuance’s Speech Recognition software when creating patient notes. Although we were not able to test out the real-life practicality of this service, the Nuance-powered experience should resemble the industry-leading products that Nuance provides.

Without being able to use the demo first-hand, we cannot speak to any specific bugs or troublesome issues that might arise with regular use. However, as mentioned earlier, Epocrates EHR is a web-based service and the fact that local interruptions in internet connectivity could significantly disrupt the service is troublesome. Thankfully, the iPad client that is currently in development should solve this issue, as it will allow for off-line access and saving of data.
Also, as a resident physician, I have a soft spot for medical education and I think the current pricing scheme makes it difficult for adoption by medical residencies. My current medicine residency program’s outpatient clinic is a fairly small practice staffed by about 7 attending physicians, but there are approximately 35 residents who would be considered as “paid users” or “clinicians.” While I understand that Epocrates is taking a gradual, deliberate approach into the market, educational discount pricing would be helpful.

Epocrates wisely selected their target audience for their first entry into the competitive arena of EMR/EHR’s by focusing on smaller outpatient clinics based around less than 10 physicians. For a small owner of a group practice, there is an dizzying number of competing products advertising similar features and few distinctions. Epocrates, via their prominence in the medical app field, provides a welcome and trusted name, especially to the more tech-savvy physicians. With Epocrates EHR, physicians have a solid and rapidly developing groundwork that utilizes the strengths of Epocrates (eg. including drug prescribing information on the prescription entry screen). And with their successful funding and market-leading mobile app, Epocrates has the financial support and resources to continue innovating and upgrading their services.

There is reasonable cause for concern with the fact that Epocrates EHR is a newcomer with some features still in development, and is a web-based app relying on a steady connection to the Internet. However, it is this same focus on new and upcoming technology that makes Epocrates EHR a promising service and differentiates it from its more “old-fashioned” competitors. If I were choosing a new EHR to start a practice with, I would highly consider the Epocrates EHR.