Visible Body is a complete, fully interactive 3D rendering of the human body and may one day replace traditional anatomy texts

It’s hard to believe that it was less than a year ago when anatomy apps were little more than drawings and textbooks digitized for use on mobile devices. In fact, in my previous review of Heart Illustrated I was lamenting the fact that anatomy apps of the day didn’t really take advantage of the touchscreen interface to present anatomy in a novel way.

Visible Body  3D Human Anatomy Atlas for iPad 2 is a huge breath of fresh air. While we at iMedicalApps have been reviewing anatomy apps that constantly improved on previous ones, Visible Body simply blew me away. After using Visible Body for mere minutes, it felt as if someone had read my previous review and made it a goal to silence my past quibbles. Not only does it take full advantage of the iPad’s touchscreen interface, it does so in such a gorgeous manner that there are not enough superlatives in my vocabulary to adequately describe it. But since a picture is worth a thousand words (especially when it comes to anatomy), I will include plenty of pictures to rectify my speechlessness and for you to judge for yourself.

Navigation is done via pre-made thumbnails, designed to highlight certain aspects of human anatomy. Clicking on a thumbnail will present the system of interest with certain structures shown, faded, or hidden in order to highlight the important areas. 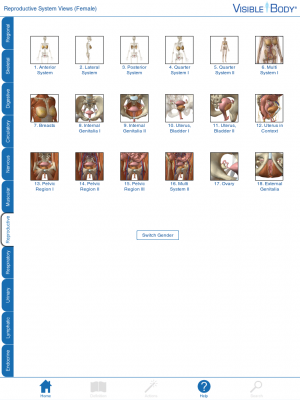 After selecting a thumbnail, the user is taken to the area of interest. Tapping on a structure highlights it, enabling the user to see the name and margins of the structure. Tapping on the definition button brings up explanatory text on the structure. Rotating is done with the joystick or 1 finger.  Zooming  is performed with 2 fingers while 3 fingers control scrolling with the arrows.  I prefer navigation using fingers alone, as it is very natural.  Unlike the previously reviewed Pocket Body anatomy app, there is no limit on the amount of zooming you can do. 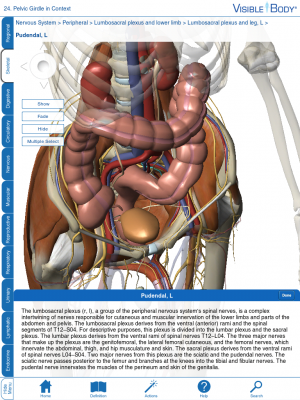 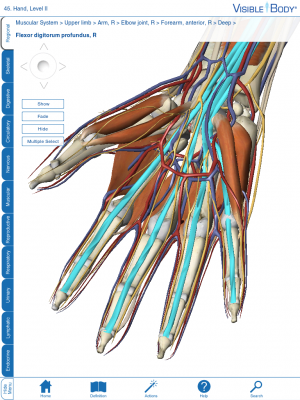 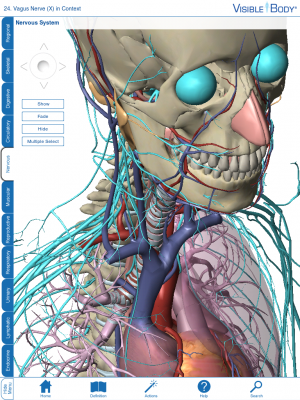 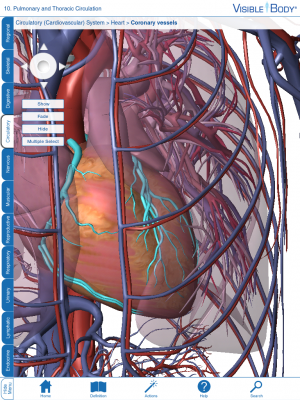 The action tab brings up almost a dozen useful buttons for further manipulation of the 3D model. In addition to the basic “show”, “fade” and “hide” actions, additional buttons allow one to apply those actions to all the selected structures or non-selected structures. If one is overzealous in manipulating the image, refreshing to the original position is a simple button press away. The “multiple select” mode is very useful for quickly manipulating the model (eg. opening the skull by peeling away the different structures). The app works equally well in portrait and in landscape mode. A recent update has also added a male anatomy model to complement the existing female model. 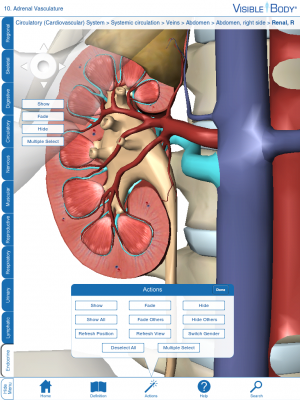 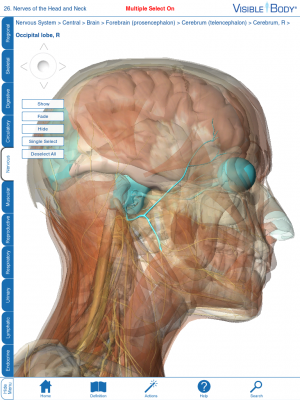 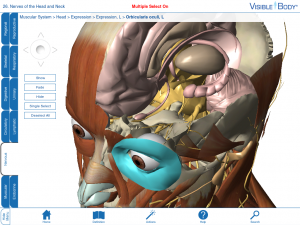 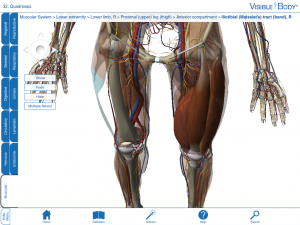 Finally, the ever-useful search function is also present and accounted for. Typing a keyword into the search form brings up a list of structures. If the structure isn’t in the current model, one can add it. If it is in the model, one can select it or center the view on the structure. As shown below, while browsing the abdominal muscles, I was able to quickly switch views and highlight the cavernous sinuses. 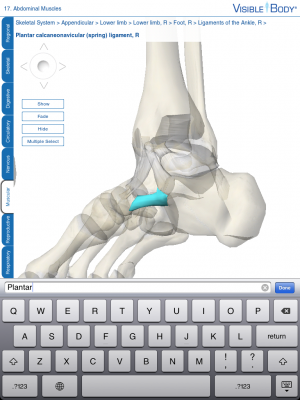 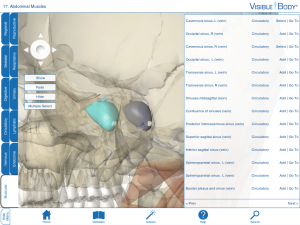 As demonstrated in the images above, Visible Body is a dazzling demonstration of human anatomy. Though brilliant and ground-breaking, it is not quite perfect. Considering the host of graphics that must be rendered, the iPad’s memory is a scarce resource. Unfortunately for many, this app will only run on iPad 2. Indeed, even on an iPad 2, the app can be sluggish at times. Initial loading can consume a good half minute. I have noticed sporadic crashing of the app, particularly after taking screenshots. While one can exit the app and restart it immediately, if one runs another memory-consuming app in the interim, the app will have to be reloaded entirely, again costing the better half of a minute. And for all the detail that the app covers, the human body is even more detailed, and many finer nuances such as the landmarks on a bone or structures of the eye are missing. It is because of this last point that I am unable to say that this app completely replaces current atlases such as Netter’s Atlas of the Human Body. But I am hopeful that just as the Visible Body team recently added a male body to the app, the team may one day add these finer details. That day may be the day that traditional paper atlases are rendered obsolete.

While the app launched at $49.99, its price was subsequently raised to $99.99.   At its current iteration, while the cost is still significant, I would argue that the cost can be justified. The current price is less than most respectable textbooks, and its educational value is definitely more than the asking price. For me, along with actually fitting into my white coat pocket, this app is the best reason to upgrade to an iPad 2. I only wish it was released sooner, as it would’ve definitely enhanced my preclinical anatomy education. I would recommend this app wholeheartedly to any student of medicine or anatomy. Professors and teachers of anatomy would also benefit from this app, as the iPad 2’s video mirroring capabilities would greatly enhance any anatomy lecture. And lastly, practicing physicians would also benefit from this from the perspective of patient education.

Rarely does an app come along and knocks my socks off, but Visible Body is one of those apps. I have used it over the past few weeks to demonstrate the power of the iPad 2 to observers, and none have been anything less than impressed. While the cost is significant, the value is compelling.