Over 20 million people in the United States have diabetes, costing nearly $200 billion annually. Perhaps the biggest challenge in managing a chronic disease on this scale is finding ways to change the behavioral drivers that lead to diabetes and its complications. What we need are tools that help people make healthy choices by integrating into their day-to-day activities, thereby making mobile platforms an ideal host for these interventions.

The Data Design Diabetes Challenge sponsored by Sanofi-Aventis has announced its five semi-finalists, each profiled below. The competition challenges participants to use mobile technology to tackle this public health epidemic. The competition asked entrants to develop a scalable, data-driven product using open data sets available from the government that can benefit anyone in the diabetes ecosystem (i.e. patients, caregivers, health care providers, and family members).

“The design principles are so key here because we don’t want to create another app that’s just going to to be out there. We want to put something forward that’s going to be lasting from a patient perspective”, says Dennis Urbaniak, VP of US Diabetes and one of the contest’s distinguished panel of judges.

Each of the five semi-finalists receives $20,000 and the opportunity to participate in a “virtual incubator” over the next couple months. In October two finalists will be announced, each receiving an additional $10,000, whose app will be tested on actual diabetes patients. Depending on the outcomes one app will be awarded $100,000 to develop a scalable prototype. Here’s whats in the running.

The following apps were chosen from among 100+ entrants as the five semi-finalists.

Ginger.io, which we recently featured on iMedicalApps, has developed an app called DailyData, which transforms a mobile device into an automatic self-monitoring tool for tracking real-time movement patterns and social interactions passively, without user input. Very few apps choose to embrace passive data collection over the use of interactive features that directly engage users. It will be very interesting to see how the company applies this technology to diabetes patients. 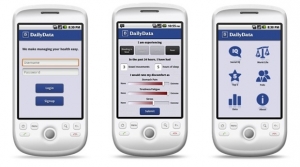 Wellfra.me personalizes publicly available data and creates individualized challenges and rewards to put diabetics back in control, which sounds a great deal like the gamification of diabetes care. The key feature is a risk calculation engine which allows patients to pinpoint behaviors they want to change and uses aggregated experiences from similar patients to see potential outcomes of that change. Each patient receives a real-time calculation of risk reduced, potential financial cost benefits, as well as the ability to share achievements via social media. The concept was designed by My Care Apps, a Cambridge-based startup which developed FeverAid, an app that guides parents through a simple yet comprehensive assessment of their child by providing the same questions doctors and nurses ask and then generating a custom report designed by doctors, for doctors, based on the answers to those questions.

Chewable is also a mobile gaming service that helps people with diabetes understand the best food choices and tracks their progress toward meeting healthy goals through food interactions. The app tracks users’ purchases at supermarkets and assigns each a “food persona” based on those purchases that provides specific goals that can be achieved by making changes in real-world food choices. Interestingly, the concept for Chewable was submitted by ENIAC Ventures, a seed-stage venture capital fund focused exclusively on mobile technologies.

MySidekick is an interactive children’s website and accompanying mobile app that harnesses QR Code technology to help children, and their healthcare providers, track their physical activity. The concept is the brainchild of Jennifer Wong, a researcher at MIT Innovations in International Health and a consultant at Oliver Wyman. There is a game element in this app too, with physical activity and glucose levels linked to a digital pet-like creature whose health varies in response to the patients’ activities and behaviors. The game will include the potential to earn rewards for the digital pet, as well. Eventually, the vision is for these digital rewards to translate into real-world prizes at local retailers.

HopeUnwounded is an app and website combining uploaded patient data (pictures, glucose levels, insulin requirements) with analyses of anonymous hospital data to prevent, diagnose, and treat diabetic foot injuries. The ultimate goal of the technology, created by Stephen Racunas of Grass Roots Science, is to provide diabetics with the tools they need to quickly identify and treat foot ulcers before they lead to the unnecessary loss of limb, a fate suffered by 15% of diabetics.

Five very intriguing applications, three of which incorporate games or challenges of some sort into the core functionality of the app, confirming the emerging trend of the gamification of healthcare we noted just this last week following the 2011 Mobile Health World Congress.