It is plainly obvious from our website name that there are few things that we at iMedicalApps find more exciting than discovering new apps that can augment our medical practice. But what I often find even more exciting than medical apps are medical peripherals.

The idea of pulling out a device and attaching it to a smartphone for medical use is very exciting. With peripherals on the horizon that can diagnose cataracts and measure oxygen saturation, the future is certainly bright. And with the release of the iHealth and Withings Blood Pressure Monitors for the iPhone and iPad to consumers, it certainly feels like that future has arrived.

While these devices aren’t quite as advanced as tricorders from Star Trek yet, they certainly feel like premium products. Unfortunately, they also carry premium prices, with iHealth retailing for $99.95 and the Withings Blood Pressure Monitor at $129.95. 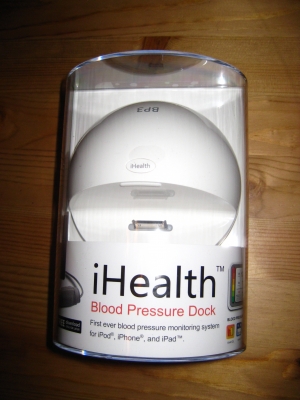 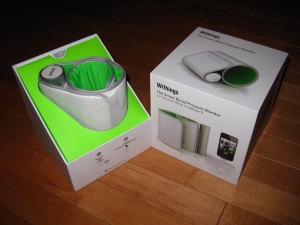 The iHealth’s full name is actually iHealth Blood Pressure Dock and for a good reason – it comes with an iPhone/iPad dock. The manufacturer’s claim is that the dock is adjustable to fit any of the iOS devices, and this seems true upon testing with my iPhone 3GS with a plastic case, and iPad 2 with clear protective backing. The blood pressure cuff is powered by an internal battery within the dock, which is rechargeable by plugging the dock into an electrical outlet. The cuff itself is pretty floppy and bendable, similar to the standard cuffs one would find in a clinic.

Meanwhile, the Withings Blood Pressure is basically a hard cuff with a metal cylinder that houses the batteries. Both products look and feel good, but I definitely appreciate the fact that iHealth essentially comes with a dock, which would normally retail for $29.00 at an Apple Store. iHealth also runs on an internal rechargeable battery which I also prefer because I find fumbling with 4 AAA alkaline batteries to be a huge nuisance. The Withings Blood Pressure Monitor, however, does quote an 800 day battery life at 3 uses per day. While I am unable to test that claim, my blood pressure monitor still displays a full bar after a week of heavy use. 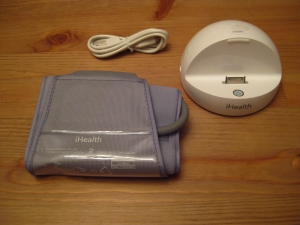 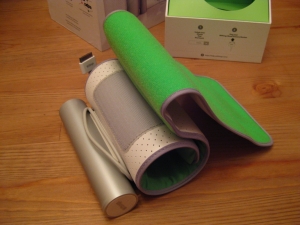 Both devices fit comfortably around the arm, and are fairly easy to put on. The iHealth dock would probably be better if one desired to use it in a clinical setting, as the separate dock and cuff design makes it easier for a health care practitioner to put the cuff on a patient before inflating the cuff on the app. The Withings monitor on the other hand, feels very natural to use with one hand, and I found myself able to eat my breakfast with my right hand while manipulating the app and cuff with my left hand. 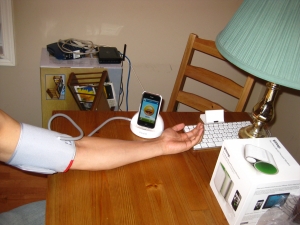 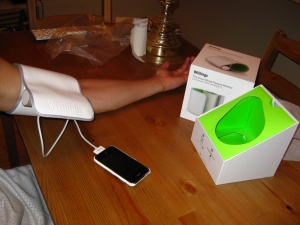 As far as the apps go, they both cover the same basic functions. One can measure a blood pressure and heart rate, which is recorded along with the date. Multiple measurements can be plotted onto a graph. When it comes to the app however, Withings easily trumps iHealth. While both apps are universal apps, iHealth’s iPad version merely contains upscaled graphics from the iPhone version. The additional screen real estate is not utilized at all. The Withings iPad version meanwhile plots a graph of measurements in the back while windows pop up in the foreground as needed. While one can share results from iHealth by Facebook, Twitter, or email, Withings additionally enables one to share via email, with other users of the device, other Withings account holders, or just simply password lock the app and its data. The Withings app is more elegant – the extra features like such the ability to engage auto mode, in which the app takes three consecutive measurements with predefined breaks, demonstrate impressive forethought in decision. 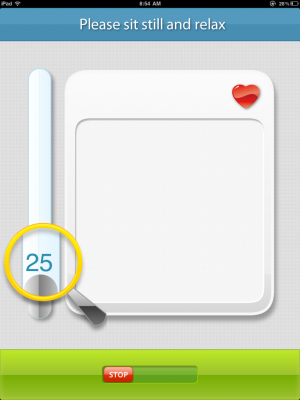 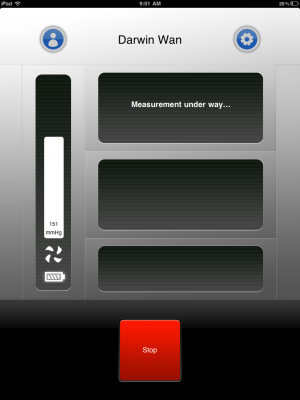 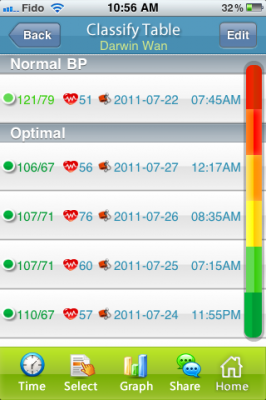 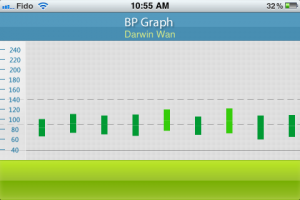 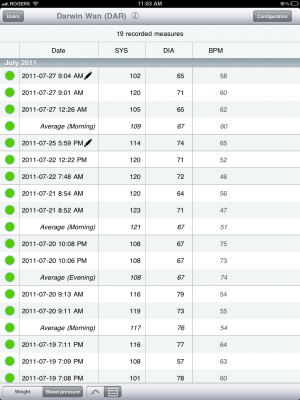 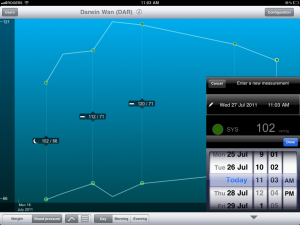 Finally, the Withings Blood Pressure Monitor works hand-in-hand with the Withings Wi-Fi Body Scale. While this review does not cover the Wi-Fi Body Scale, which basically syncs one’s weight data via Wi-Fi, there are obvious reasons for choosing the Withings Blood Pressure Monitor over the iHealth dock. One is able to see both weight and blood pressure curves on side-by-side graphs, and there is the added benefit of not having to fumble around with separate apps. The Wi-Fi syncing system that Withings employs is elegant, and clearly superior to the iHealth system which basically stores data locally, and is not ideal for those who use multiple iOS devices. 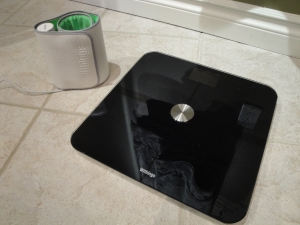 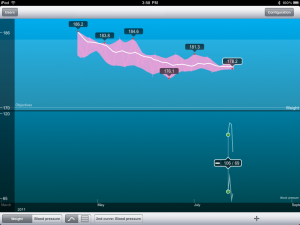 Home vs. Clinical Use:

Both of these products are by and large designed for the general consumer. I imagine the portability of these devices may tempt would-be thieves at a busy clinic. While I feel both products were reasonably accurate in their measurements with the usual margin of error, I am not a regulatory body and am unable to endorse their use in medical practice. One could argue that automated cuffs such as these would help minimize the white coat hypertension that often plagues patients. However, taking into account the way the apps are designed for a few users, it would be too inefficient to create a user account for each patient on whom the cuffs are utilized. If the apps could somehow be automated to work seamlessly with electronic medical records, perhaps they could see use in clinical practice. But as of now, their intended use is at home, with the occasional sharing of measurements with health care professionals via email or Withings account sharing.

Both of these blood pressure monitors are fine products and I would not hesitate to recommend them to interested consumers who may benefit from frequent blood pressure measurements. At $99.95, the iHealth Blood Pressure Dock is definitely better for the budget-conscious, with its combination of a lower price, double function as a dock, and internal rechargeable battery. Though the Withings Blood Pressure Monitor is $129.95, for those who already own the Withings Wi-Fi Body Scale or those who prefer the elegant Wi-Fi syncing mechanism and general all-around superior software, the Withings monitor is the more suitable choice.

Editor’s note: As this review has mentioned, the dock for the iHealth BP cuff did work with the iPad 2, and the iPhone 3GS, however, we have received reports from buyers of the early iHealth BP cuff that the dock was not initially working for the iPad 2.  This is something you should take into consideration when choosing between the two devices.  No one categorically knows the hardware changes that will occur with iOS devices in the future, and tethering the BP cuff to a dock (iHealth) could make it useless with future hardware upgrades — whereas this isn’t a concern with the Withings Blood pressure monitor.

Caveat: I am not a medical device regulatory/licensing body. This review and comparison of these two devices are my own opinion and I in no way am able to determine their suitability for medical practice.