The HTC Flyer promises to be the perfect medical tablet: it supports a fine-tip stylus and is small enough at 7 inches to comfortably carry around in a white coat. The recently reviewed BlackBerry PlayBook impressed with its size (also 7 inches), but ultimately suffered from its lack of third party apps. The HTC Flyer offers the potential of the growing Android marketplace and its many medical apps, so I was thrilled to purchase one for review. One of the two tablets earned a permanent spot in my white coat. Read on to find out which one and why. 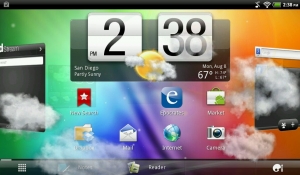 For the Flyer’s operating system, HTC took Android OS 2.3 (aka Gingerbread), which was not intended for tablets, and customized it to support the larger screen of a tablet. Since other new Android tablets (eg. Samsung Galaxy Tab) run Android 3.1, the Flyer is running a version that is essentially 2 iterations behind. On the upside, though, HTC did an excellent job customizing the OS, and the Flyer functions quite effectively on the larger screen. 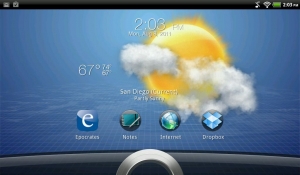 One unique feature of the OS that I appreciated for hospital use is that one can launch one of 4 user-specified apps directly from the launch screen by dragging the selected app on the lock screen to the “unlock ring” at the bottom. This cuts out some extra steps for quick tasks like referencing the dosing for a medication through Epocrates. Also, the operating system is quite beautiful, with flashy animations for the weather and a large flip-style clock. Another benefit of Android is that it allows for various other applications/widgets to be running on the home screens, which provides a welcome level of complexity above the iPad’s simplified iOS homescreen icon launcher.

Android’s implementation of multi-tasking is effective and powerful. Programs will continue to run in the background unless you intentionally kill the process. You can alternate between open apps through a notifications/settings panel that can be flicked down from the top of the screen, which is just slightly more complex than its BlackBerry and Apple competitors. 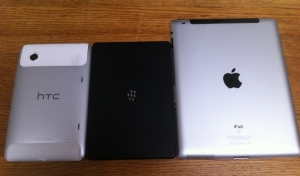 After owning the BlackBerry PlayBook and iPad 2 for several months, I can’t help but describe the Flyer’s overall feel as cheaper than its counterparts. What immediately stands out is the two-toned back surface (white and grey) that awkwardly bulges at the bottom. The white color is concerning for showing marks/scuffs, although it does at least fit the white color scheme of most hospitals. Overall, it simply does not have the same professional, sleek look of the PlayBook and iPad. 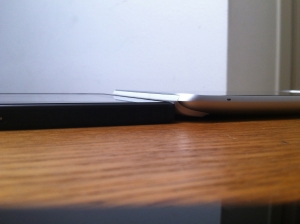 The Flyer (Right) is Slightly Thicker Than the PlayBook (Left)