Will new Electronic Tattoo technology be the Black Swan event that supercharges growth of the mHealth industry?

Perhaps the single greatest barrier to overcome in the movement toward pervasive consumer and physician adoption and use of wearable sensors and wireless body area networks is the invasive, uncomfortable, obtrusive and unsightly nature of most current sensor technology.

Wearable sensor technology has come a long way and there are comfortable and powerful products available for most patient needs, but for the most part design has taken a backseat to engineering on the list of priorities among device developers.

Recently published research in the journal Science entitled Epidermal Electronics and conducted by a large team of scientists at the University of Illinois appears to have reset the bar in terms of what is possible in both the design and functionality of wearable sensor technology, and may finally lead to products that consumers will be able to purchase at a pharmacy or fitness retailer. 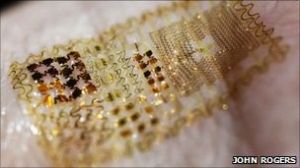 The device is less than 50 nanometers thick, which is less than the diameter of a human hair, and was worn for up to 24 hours without loss of function or skin irritation. The device maintains adhesion to the skin by utilizing the weak forces of attraction between the skin and the polyester layer at the base of the sensor, the same force used by geckos to cling to walls. 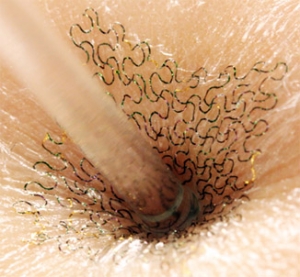 “Our goal was to develop an electronic technology that could integrate with the skin in a way that is invisible to the user. It is a technology that blurs the distinction between electronics and biology,” noted John Rogers, head of the Rogers Research Group at the University of Illinois.

Professor Rogers is also a Co-Founder of mc10, the start-up launched to commercialize the technology developed by the collective research efforts of the impressive multi-disciplinary, cross-institutional research team.

Are we witnessing a Black Swan Event? 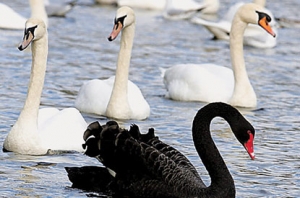 Nassim Nicholas Taleb’s Black Swan Theory or Theory of Black Swan Events is a metaphor that encapsulates the concept that the Event is a surprise (to the observer) and has a major impact. After the fact, the Event is rationalized by hindsight.

Many start-ups are developing innovative solutions that make wearable sensors more comfortable and less invasive, but no company has yet found a way to overcome the aesthetic factors, particularly the unwanted attention wearable sensors can draw, and break through the barriers preventing ubiquitous adoption by consumers. Arguably, the innovations achieved by this team of Midwestern academics could one day be looked back upon (if the technology is wisely and economically commercialized) as the Black Swan event that gave rise to a multi-billion dollar mobile health and body computing industry.

We should all be cheering on Rogers and his team because they have built the first viable wearable sensor platform which seems to have a clear path to market, and if they can successfully navigate the technology from the lab to market the entire industry will reap the windfall and start-ups will finally have a competitive consumer environment in which to compete.

We report classes of electronic systems that achieve thicknesses, effective elastic moduli, bending stiffnesses, and areal mass densities matched to the epidermis. Unlike traditional wafer-based technologies, laminating such devices onto the skin leads to conformal contact and adequate adhesion based on van der Waals interactions alone, in a manner that is mechanically invisible to the user. We describe systems incorporating electrophysiological, temperature, and strain sensors, as well as transistors, light-emitting diodes, photodetectors, radio frequency inductors, capacitors, oscillators, and rectifying diodes. Solar cells and wireless coils provide options for power supply. We used this type of technology to measure electrical activity produced by the heart, brain, and skeletal muscles and show that the resulting data contain sufficient information for an unusual type of computer game controller.