Using smartphones for objective diagnosis and monitoring of Parkinson’s patients

When Robert Delano was diagnosed with early onset Parkinson’s at the mere age of 30, he was deeply unsettled by the subjective nature of his diagnosis.

Doctors would say, “You’re young and your tremor is fast”, and other observations, he explained in an interview with NPR in Atlanta “When I asked what fast is, the definition they gave me was that it’s faster than most”.

More than 10 million people in the US suffer from tremor-related disease, including Parkinson’s, essential tremor and multiple sclerosis. (Boelen, 2009) This presents a major business opportunity for a forward thinking innovator to develop a Smartphone App capable of capturing and contextualizing patient tremor data remotely in real-time for purposes of developing a truly objective and standardized diagnostic protocol.

Delano, along with his co-principal investigator Brian Parise of the Georgia Tech Research Institute (GTRI), believes their iTrem Smartphone App is precisely such a solution.

“Currently, doctors observe tremor during office visits and rate it on a subjective scale of zero to four.  That approach seemed outdated to me, considering all the technology now available”, Delano said. “My wife Heather, who’s an engineer, remarked that maybe we could try putting some accelerometers on my arm.  That made me think of the accelerometer in the iPhone and here we are.”

“We expect iTrem to be a very useful tool for patients and their caregivers,” said Parise. “And as a downloadable application, it also promises to be convenient and cost-effective.”

iTrem uses the iPhone’s built-in accelerometer to collect data on a patient in his or her home and/or office. Currently the App directly tracks tremor information as the patient simply holds the phone in their hand for an extended period at predetermined intervals over the course of days or weeks. Future iterations will incorporate simple puzzle games to record data and ultimately share that data via social networks. Delano and Parise seem to believe they can drive user adoption and stimulate engagement by patients through the “gamification” of the underlying technology. 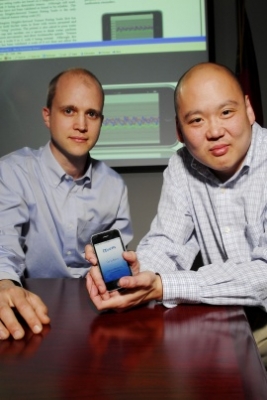 The App took about a year for Delano and Parise to develop and is due to undergo initial clinical trials as early as this summer at  Emory University’s Movement Disorder Clinic under the observation of Dr. Stewart Factor , the clinic’s director and one of the nation’s leading Parkinson’s specialists.

The expectation is that the data collected during the clinical trial will allow physicians to remotely monitor the degree of disability, progression and medication response among patients with tremor-related conditions. To achieve this end, Delano and Parise have engaged physicians in the initial design of the application’s interface and feature integration.

Future research and development will include additional Parkinson’s related tests and investigation of gait analysis in a joint effort with the University of South Florida and the James A. Haley Veterans’ Hospital in Tampa, FL.

Parise and Delano are currently working with the Advanced Technology Development Center (ATDC), a start-up accelerator based at Georgia Tech, to form a start-up company for the purpose of commercializing the iTrem technology.

“Even factoring in the cost of an iPhone, using iTrem is likely to be more convenient and less expensive for patients than office visits, and the data is accurate and abundant”, Delano said.

Once iTrem hits the App Store it will be available either for free or at a minimal cost of a few dollars. The technology will require FDA 510(k) approval before it can be marketed to patients and made available for download in the App Store, leaving a significant barrier to entry left for the start-up to overcome. Don’t be surprised if the company to be founded by Delano and Parise needs to raise substantial venture capital investors to get its product to market, especially if they intend to go the freemium route with their business model.