Augmented Reality (AR) has been touted as the ‘next big thing’ with AR applications being a relatively new addition to the App Store. According to Wikipedia, Augmented Reality (AR) is a term for a live direct or an indirect view of a physical, real-world environment, in which elements are augmented by computer-generated sensory input, such as sound or graphics.

One notable non-medical example is WordLens; this application translates written Spanish ‘on the go’. By pointing the camera at foreign words, the software recognizes and translates them instantaneously. 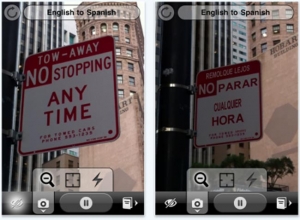 It subsequently translates the foreign words into English. Hitherto, this technology has not been applied to medical applications until developer Matthew Ockendon designed Hallux Valgus. Ockendon has developed a range of goniometer applications designed specifically for the iPhone.

According to iTunes: “Hallux Angles is a radiographic measurement aid to assist in the pre-op radiographic planning process. It is intended to supplement – not replace – conventional techniques. The target audience includes all those practicing forefoot surgery” 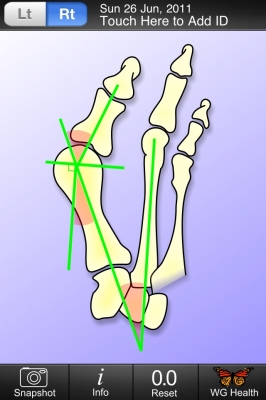 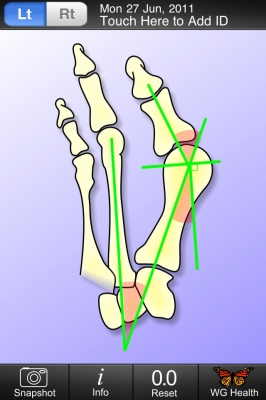 This application is intuitive and easy to use. Currently the Hallux goniometer only supports the Distal Metatarsal Articular Angle (DMMA), the Interphalangeal Angle (IPA) and the Halux Valgus Angle (HVA). Using ‘Augmented Reality’, the radiograph to be measured is visualized using the iPhone camera. On-screen guides help to align the device with the forefoot bones. Aligning the green target line with the diaphysis of the bones (Phalanges/Metatarsals) to be measured allows the angle to be calculated from the position of the iPhone in space using the built in accelerometers. 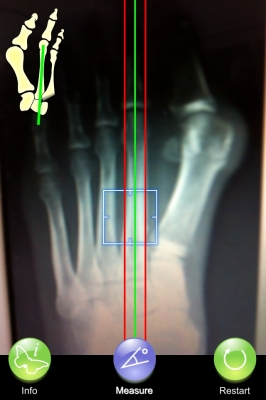 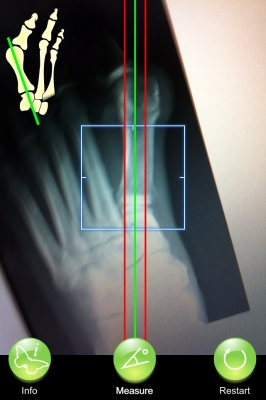 The application can record measurements for either foot which are individually stored along with the patient ID, date and time. 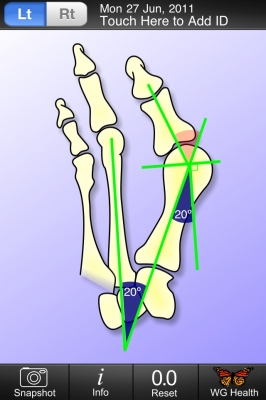 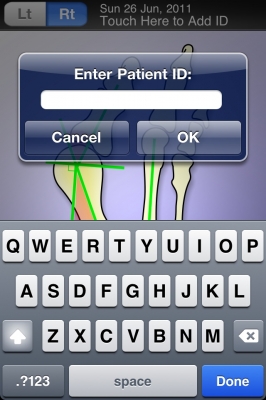 The application has a simple function which it performs extraordinarily well. It is well designed and a very useful application for its target audience: orthopaedic surgeons. There is a clear instruction guide. It is clear from its content that this application is designed for orthopaedic surgeons specialising in foot surgery. Consequently, it is of very limited use for other healthcare professionals. A further downside is the lack of a storage system for information. The current method involves saving a screenshot to the photo roll which, whilst functional, is not a particularly efficient (or secure) system.

The most exciting point is the successful integration of mobile medical technology with augmented reality. Imagine being able to point an iPhone at a CXR and have it highlight areas of concern. The potential to integrate with surgical devices such as laparoscopes, arthroscopes or computer-aided navigation is currently fiction, although it may not be as far off as we initially thought. For more information about using the iPad in the operating room, see our article here. Augmented reality is sure to become more mainstream as technology and software improves at an astounding rate.