Ginger.io’s DailyData app “infers” health from monitoring and analyzing smartphone use and location

Ginger.io is a spin-off from the MIT Media Lab, touting an app capable of determining a patient’s health risks by analyzing the subtle variations in the ways and places they use their smartphone.

The app, called DailyData first creates a baseline model of a user’s smartphone activity and then searches for deviations from that pattern. “We can compare this to your past behavior, or to aggregate behavior of individuals of your approximate age and demographic”, says Madan. 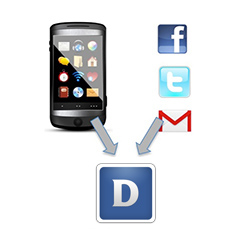 Users can add context to the automatically collected data with manually entered information on medication, symptoms, and social activity, and can look at visualizations of their data on their phone or on a website. Once the app detects changes in behavior, which could signal changes in the users condition, it automatically sends biofeedback to the user in the form of text messages, and/or could alert a pre-identified individual when the individual’s data indicates they might be ill.

“Changes in medication or mood are tied to communication patterns”, company co-founder Karan Singh tells MIT Technology Review. “Call diversity is a great example. When people fall into a cycle of depression, they tend to go into isolation and only call a couple of people”.

Madan claims his algorithms can “infer” a users condition with a high degree of accuracy. His assertion is based on an experiment the company ran in 2009 in Boston during which they gave 70 students in an undergraduate dorm cell phones loaded with their software and over the course of ten weeks collected data about users activities. It quickly became clear from the data that a characteristic signature emerged as it became clear students who came down with a fever or full blown flu tended to move around less and make fewer calls late at night and early in the morning. When Madan trained his algorithms to search for this signature in the data, the app correctly inferred flu diagnosis based on automatically captured data in 90 percent of cases.

According to the company’s website patients own and control the data collected via the DailyData app and ultimately control whether data is opened up to sharing. Or at least that is what the company tells users. I suspect that once the data is “shared” by users the ownership is much less explicit because the company needs to monetize after all. I doubt very much the patients will be receiving a revenue share from deals made by Ginger.io to license data they “own” to third parties.