BodyMedia, has made the fight against obesity its central corporate mission. The Pittsburgh-based company has developed a patented wearable sensor device and complementary software applications that track users physical activity levels, calories expended and sleep patterns for the purpose of helping people lose weight, improve performance and lead healthier lives. 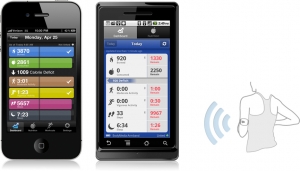 BodyMedia FIT is a holistic weight management system consisting of the BodyMedia Armband monitor, online Activity Manager, and free downloadable apps for Android and iPhone. The system is regulated by the FDA as a Class II Medical Device, and they market their clinical applications under the SenseWear brand. 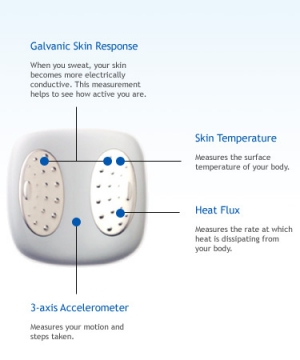 The BodyMedia FIT Armband uses four sensors to automatically collect more than 5,000 data readings every minute. The armband costs $259, plus $7/month subscription for the data. The information tracked can be managed with BodyMedia’s online Activity Manager. The BodyMedia FIT Data API allows data collected by the wearable armband to be used in third-party products, applications, and services. The API gives developers the ability to interact with the minute-by-minute lifestyle data for users who have granted them access. 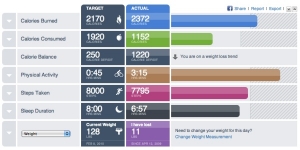 Dr. Astro Teller and Ivo Stivoric, along with two fellow researchers at Carnegie Mellon University, founded BodyMedia in 1999 with a vision of using technology to solve the obesity epidemic by giving people “the power of decoding secrets of the body and the ability to leverage that information to make sweeping changes to their own health and fitness.”

Teller has since moved on from his full-time post at BodyMedia to join Google as Director of New Projects, but maintains an active role with the company as a member of the company’s board. Stivoric, the only co-founder who still maintains a day-to-day role at the company, is CTO and VP of New Products.

To encourage developers to use their API, the company recently launched a challenge on the Health 2.0 website, which calls on teams to,

Create an application that allows self-forming groups (family, friends, clubs, etc) to make long term positive decisions to improve weight/fitness and potentially compare progress. The application should be motivational, fun and ideally use techniques to subconsciously create long-term behavior change toward a healthier lifestyle. As part of the challenge, define a road map of how the application can evolve over the next few years. Teams should creatively use the BodyMedia API to create a motivational and fun web and/or mobile application, game, visualization or Facebook app that actively engages and intrigues users to promote healthier actions.

As I mentioned in my piece on Zephyr Technologies over the weekend, Brian Dolan of MobiHealthNews had a recent post in which he made the prediction, along with input from Zeo Co-Founder and CTO Ben Rubin, that BodyMedia would be the first major (many hundreds of millions) acquisition in the mobile health space. Rubin identified three types of companies that would find BodyMedia to be an attractive takeover target, including consumer health companies (i.e. Phillips, J&J, P&G), weight loss companies (i.e. Jenny Craig, Weight Watchers, NutriSystem), and consumer electronics companies (i.e. Polar, Garmin, Omron).

I don’t think BodyMedia is nearly as valuable as Rubin, at least not with the limited products they offer today. The company has developed a valuable brand and should have added additional products years ago, but they are well positioned to make the strategic deals they will need to make if they hope to land a high nine figure deal. One deal that would get the company much closer to that exit would be a merger with Rubin’s Zeo, as the two companies are perfect compliments.

The following You Tube video profiles the features included in the most recent release of BodyMedia’s iOS application.