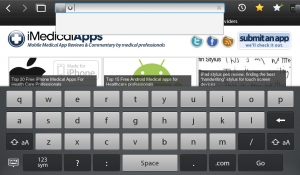 With the smaller 7-inch screen, the usability of the on-screen keyboard is affected, both for better and for worse.  On one hand, when laying the Playbook on a flat surface, the smaller size makes the natural typing posture nearly impossible.  The iPad 2’s 9.8″ screen allows for one to touch type with posture roughly equivalent to using that of a PC keyboard.  However, even when in landscape orientation, the Playbook’s keyboard is too narrow to utilize “normal” typing posture.

On the other hand, when holding the playbook in your hand, typing is still comfortably possible thanks to the narrower width.  The iPad’s wider screen prevents your thumbs from reaching the middle of the keyboard, but the Playbook allows your fingers to sufficiently reach all the keys. This creates a surprisingly comfortable and speedy typing experience when holding the Playbook. Note that iOS 5 will correct this problem on iPad 2’s by allowing the keyboard to be split into two halves.

The software running the keyboard was also a mixed bag.  Its responsiveness is unexpectedly quite brisk and never seems to lag.  However, I was not able to find an easy way to insert apostrophes without switching out the letters for a symbol layout. This goes for any symbols or numbers not immediately displayed on the letter keyboard.  This issue is exacerbated by the fact that the Playbook inexcusably lacks an autocorrect or spell-check function of any sort.  Therefore, typing “dont” will not autocorrect to “don’t,” and will not even flag the text as being incorrect.  While over-aggressive auto-correction on other devices can become a nuisance, you never realize how frustrating the lack of spellcheck and autocorrect is until it’s gone. 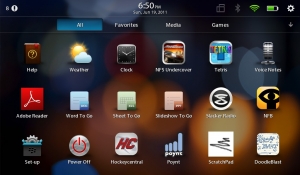 There is no Native E-mail or Calendar App

Unfortunately for RIM, an excellent user interface alone does not make a tablet great.  While much of this review has been glowing thus far, this is where things start to turn for the worse.  The Playbook unfathomably lacks an independent e-mail client and calendar client.  If you happen to have a Blackberry smartphone, the Playbook can use Blackberry Bridge to share e-mail, calendars, and BBM across the two devices.  Unfortunately, I did not fit this criteria.  RIM has declared they will add a native e-mail and calendar client by this Summer, but it’s simply perplexing as to why RIM would limit essential functionality of the Playbook to users new to the Blackberry experience.

On the plus side, RIM acquired DataVis, the software developers of the Documents to Go apps, allowing the Playbook to have pre-installed apps that allow for the viewing and editing of Word, Excel, and Powerpoint documents.  While they are not particularly groundbreaking, these are functional and effective, which is a feather in the Playbook’s cap. 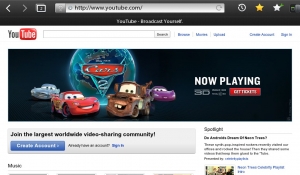 One of the distinguishing and widely advertised features of the Playbook is that it allows for Flash video. The performance of Flash Video was stutter-free for the most part, but I did notice the occasional instance where the content would not be displayed, showing a grey exclamation point instead.  (Refreshing the webpage would correct this).

It is definitely a huge plus to be able to view video content that is inaccessible on the iPad, but such content is actually hard to find.  To add insult to injury, one of the main reasons for wanting Flash support on a mobile device, Hulu.com, has chosen to block Playbook (and Android tablet) access.

In addition, Netflix streaming video is also not viewable on the Playbook as it requires Silverlight rather than Flash.  And, unlike the iPad, there is no Netflix app currently available for the Playbook, so streaming video from Netflix is currently impossible on the Playbook.  Regarding YouTube, the ability to watch Flash videos actually hurts the Playbook because it allows commercials to be inserted into videos. Therefore, I preferred watching YouTube videos via my iPad because they were commercial-free.

In summary, the Playbook can view flash videos successfully, but lacks Hulu and Netflix and hinders YouTube by adding commercials.  This makes the Flash-less iPad (which supports Netflix, Youtube, and Hulu Plus) sound more appealing, after all. 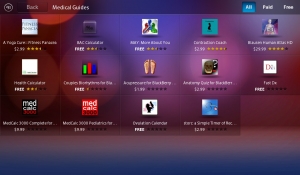 The Library of Medical Apps is Non-Existant

The tipping point for the Blackberry Playbook comes with its lack of third party app support.  No matter how well designed the Playbook is, it will not prove to be useful if it lacks quality apps. In addition to Netflix and Hulu Plus, other staples of the iOS and Android ecosystem such as Amazon Kindle, Dropbox, Twitter, and Evernote are glaringly absent.

Most importantly, as a physician, the medical apps I use most (Epocrates, Medscape, Skyscape, etc.) are not available on the Playbook. The image above captures the entire app listing under Medical Guides, and most of these apps are not practical for usage by clinicians.  This complete absence of apps is the deal breaker of the Blackberry Playbook’s viability for use in the hospital.  As demonstrated in the Display portion of this review, it functions excellently as a web browser for UpToDate.com and eMedicine, but comparing the thousands of medical apps for iOS with the barren wasteland of medical apps in the Blackberry Store is saddening.

Most concerning is the fact that all of the above mentioned apps might NEVER come.  Of those mentioned so far, the only one that is confirmed to be in the pipeline is an Amazon Kindle app.  The reality is that app developers create software for devices that have the largest customer base, and that is where Android and Apple dominate.

Camera: Impressive, But Will You Use It?

The Playbook features a 5MP back-facing camera and 3MP front-facing camera, both of which significantly outrank the iPad 2’s sub-1MP cameras.  From casual usage, the photo quality of the Playbook was pretty impressive, and it can actually capture video at High-Definition 1080p.  While the iPad 2 was widely panned for disappointing photo quality, the Playbook’s camera shines.  The Playbook also includes a video chat app, but I was unable to test this feature as I did not know anybody else with a Playbook.

While I was personally unable to test the Playbook’s battery life, the consensus of formal reviews declare that the Playbook lasts approx. 7-8 hours of general usage, which places it at the bottom-middle of the pack when it comes to tablets.  (For reference, the iPad 2 lasts about 10-11 hours) This decreased battery life is most likely due to the fact that it is a powerful multi-tasking machine, but 7-8 hours seems enough to make it through the day with frequent usage. 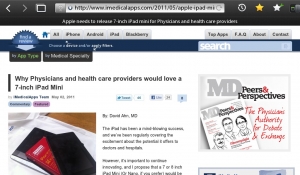 Excellently Built, but Too Many Deal breakers

I very much wanted the Blackberry Playbook to be The One: the tablet that earned a permanent, daily spot in my white coat.  I bought it with my own humble resident salary, and even delayed the writing of this review for 2 months to give time to push out several updates and to wait for more impressive third party apps to arrive in the market.  While software updates did bring improved performance and bug fixes, the promised Mail and Calendar native apps have still not arrived (although summer has just begun).  But most importantly, the third party apps never came, and I am slowly starting to give up hope.

It really is a shame because the Blackberry Playbook is an excellent device.  RIM deserves a lot of credit for creating a beautiful product that surpasses the iPad in many ways: full multitasking, intuitive bezel gesture support, Flash support. If the Playbook came out one year ago, it would be groundbreaking: customers would be excited, and developers would be making their apps compatible with the Playbook.  This would create a snowball effect, where more customers and developers would flock to the Playbook.  The problem is that it’s not one year ago, and the iPad has already seized the tablet market.  Thus, RIM finds itself trying to enter the market at the same time as Android and WebOS.

For now, I’ll just continue waiting: possibly for apps to eventually come to the Playbook, but more likely for a different 7-8 inch tablet to end my search for The One.

Note: My quest for The One has recently led me to pick up an HTC Flyer, which offers pen-tip stylus support.  I’ll review it next.