In April of this year, I made a friendly wager with a friend that the Blackberry Playbook would be the bestselling iPad competitor of the Spring/Summer.  My justification looked something like this: a) consumers are looking for smaller, more portable tablets and b) Blackberry has a faithful (yet dwindling) consumer base.  I did concede though that Android tablets would, as a category, outsell the Playbook.

I purchased my Playbook with high hopes for its 7 inch form factor: small enough to carry around on a daily basis, yet large enough to comfortably display websites and replace papers/books I carry in my white coat pocket. Read on to find out whether my search for the ideal hospital tablet ended with the Blackberry Playbook. 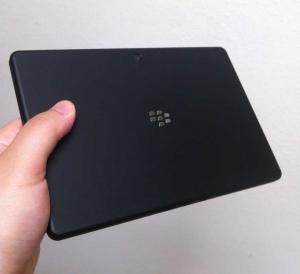 The Slick Black Surface of the Playbook

RIM’s latest device is incredibly well-designed, inside and out.  They chose to continue to go with their typical professional, yet stylish look, and it paid off.  Its angular edges and flat, black surface is reminiscent of the iPhone 4.  The back of the tablet has a subtle coating that gives it a softer touch and resists fingerprints.  For comparison, the similarly-sized HTC Flyer has a cheap two-tone plastic exterior.

The Playbook is 0.4 inches thick, making it just slightly thicker then the 0.34 inch iPad 2.  Since its edges are not tapered like the iPad 2, it does feel noticeably thicker, but still retains a sturdy and well-built feel.  It weighs 0.9lbs, which is significantly lighter than the 1.33lbs of the iPad 2. 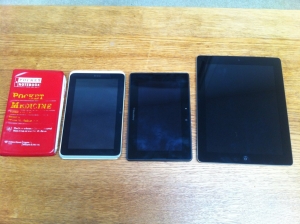 It features a 3MP front facing and 5MB back-facing camera.   The bottom of the tablet houses three ports: a charging port via micro-USB, an HDMI out, and a docking interface. The top surface of the Playbook has a power button, two volume control buttons, a play/pause button, and a headphone jac/mic.

One particular strength of the hardware is the stereo speakers that peek out of the right and left edges of the front bezel surrounding the screen.  When I first heard the music coming from both speakers, it made me realize what I’ve been missing on the mono speakers of the iPad. A minor annoyance is that the power button, which is also used to turn on/off the screen, is flush to the edge and difficult to easily press down.

However, all in all, the build quality is exceptionally high and the Playbook definitely feels solid.  I have no reservations about damaging the tablet on a day-to-day basis and its professional appearance suits the hospital and/or clinic. 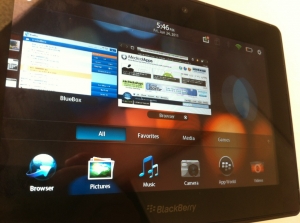 The Playbook’s Screen Is Noticeably Brighter Than Its Competitors

Display: Large Enough For Most Uses

The smaller, more portable display size of the screen is one of the more unique features of the Blackbery Playbook.  The 7″ LCD Display houses a very sharp and crisp 1024 x 600 screen, creating a pixel density of 169.  This makes its screen technically sharper than that of the iPad 2 (9.7″ screen, 1024×769 pixels, 133 ppi). In practice, they both seem equally crisp, although they both lack the Retina Display of over 300 ppi found in recent smartphones.  In addition to a crisp screen, the viewing angles are extremely wide, and the screen can be turned up to be noticeably brighter than the iPad, enough to even be viewable outdoors in sunlight.

Fits Perfectly on the Screen 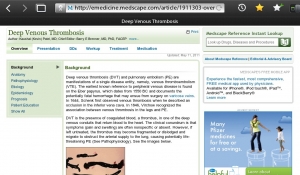 eMedicine is Also Very Readable
In practical use, the 7-inch screen was large enough to view webpages comfortably in landscape view.  This is a significant upgrade from using a smartphone, as it doesn’t require any immediate panning and zooming in order to navigate the likes of UpToDate.com or eMedicine.  When viewing videos, the improved screen size was also more than sufficient for comfortable individual viewing.  I frequently use my tablets for YouTube viewing, and did not really find any real functional difference between watching videos on my iPad 2 or my Playbook despite the size difference.
One critique is that the widescreen proportions of the Playbook make it significantly more useful in landscape rather than portrait orientation. On the flipside, when in landscape orientation, the width of the screen goes a long way in making web-browsing and videos more effective. 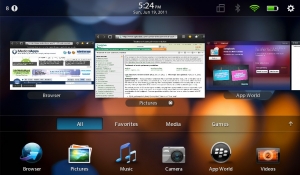 The Playbook OS Is Beautiful, Easy to Use, and Multi-tasks Excellently

Operating System: Multi-Tasking, for the Win

RIM and Blackberry have never been known for intuitive, graceful operating systems until the Playbook arrived.  Much of this new design is likely due to their acquisition of QNX, an OS which serves as the basis for the Playbook OS, and The Astonishing Tribe, a talented mobile app development company.  While most other tablet OS’s have been essentially mimicking Apple’s iOS, the Playbook OS takes a different path, one that resembles WebOS (of Palm/HP fame) more than anything else.

Much of the beauty of the Playbook OS arises in multitasking.  With dual-core processors and 1GB of RAM, the Playbook can effectively keep many active apps running at the same time.  The multi-tasking experience is the closest a tablet has come to resembling a PC, and the ease of transitioning between apps is unmatched by any Android or Apple mobile device.  It’s a beautiful sight to move a still-playing YouTube video to the background while flicking between several other still-running apps as well.

These swiping gestures are incredibly intuitive and add immensely to the user experience.  They make maintaining several processes in the hospital possible at the same time (for example, browsing eMedicine, viewing a Word Document, and reading a journal article PDF).  As a testament to the ingenuity of the Playbook’s design, I often found myself trying to carry over a lot of the gestures to the iPad, unsuccessfully of course.