At the first page you are met with a screen to enter the age of the child and either allow the program to pick the estimated weight or put your own weight in. This is a nice feature as often in pediatric emergencies patients arrive through the door needing immediate care and a weight is unavailable. The estimated weight it appears to pick is the 50% for a boy of the selected age. Allowing you to pick the gender of the child would be helpful in narrowing down the weight a little further since girls of a given age would weigh a little less.  Another option would be to allow the use of Broselow colors. These days the standard for most ERs is the Broselow tape which is a plastic foldable tape that doses based on length.

Once you select your patient you have a section of drugs broken down into: cardiac arrest meds, infusions, and bolus drugs. The cardiac arrest meds are short a few drugs. There are no drugs for treating ventricular fibrillation (amiodarone)  and they do not make mention of the dose of electricity for synchronized cardioversion (only for defibrillation). The infusion list assumes you are mixing all drugs in 50mL bags which is not usually the case. (we usually use 100 or 250mL bags for drips). Also, in America thanks to JCAHO regs medicated infusions need to be have standardized concentrations and not use the “rule of 6” employed by this program. The list of bolus drugs is missing a few key drugs as well such as midazolam and hydrocortisone for sepsis.

One issue that US users should be aware of is that the names of the drugs have been changed to what is commonly used in Europe, which may throw you for a loop if using the program in a critical situation. For example instead of epinephrine it says adrenalin and instead of succinylchloride it says suxamethominium. 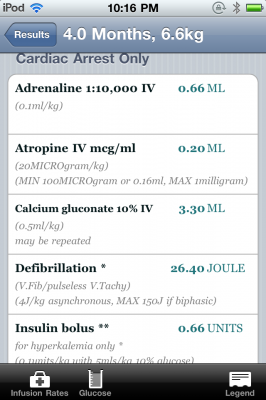 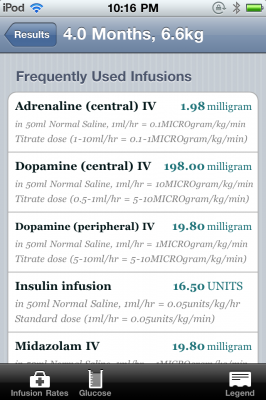 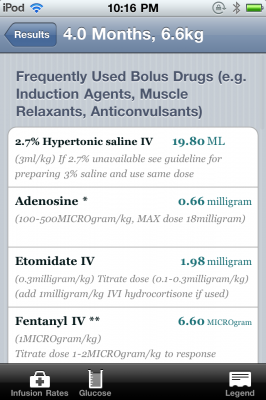 It also has a section with physiologic parameters based on the child’s age as well as equipment sizes. The data is correct however they recommend NOT using cuffed endotracheal tubes for children less than 10 which is somewhat outdated and not consistent with the current Pediatric Advanced Life Support guidelines from the American Heart Association. (These days we tend to use cuffed endotracheal tubes even for younger children).

There is an iPad version as well. The layout is similar to the iPhone version but it is appropriately sized for the larger device. 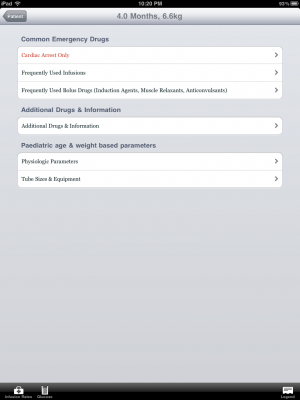 Overall I have a hard time recommending this app for users in the US. While the interface is clean, there are several other apps in the store that aim to provide pediatric drug dosing for cardiac arrests. I suspect one of these would be better.

Mohamed Gaffoor, MD is a pediatric intensivist who blogs at PICUMD.com.