Surgical Radiology is an app that aims to teach appropriate surgical radiology interpretation skills for surgeons and trainees.

It emphasizes the clinical implications for imaging findings and prompts the user to identify the imaging abnormality and suggest treatments, where appropriate.

It is a free app written for the iOS platform (iPhone & iPad), developed by Drs. Dangleben and Lee at the Lehigh Valley Health Network, a Level I Trama Center in Pennsylvania with a general surgery residency.

When using the app, the user is shown a pop up image, and you’re prompted to find the pathology. When the user taps on the image, the diagnosis pops up. A multiple choice question related to the image then populates the screen. To make it more interesting, a timer in the top right hand corner, and counts down from 30 seconds . Users can compare their scores using iOS’s native Gamecenter — one of the first times we’ve seen a medical app use the gaming platform from Apple. 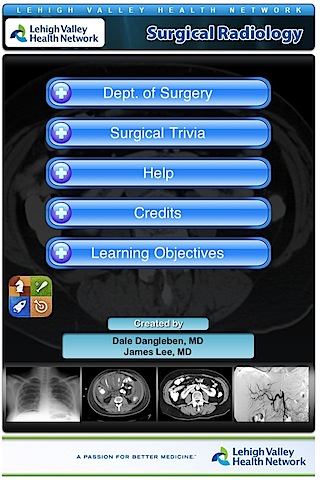 The Dept. of Surgery listing displays information on the Lehigh Valley Health Network in General Surgery and the Chairman’s Message.

Help lists the App, features, How to Play and Game Centre.  Credits displays a list of the physicians responsible for the application. 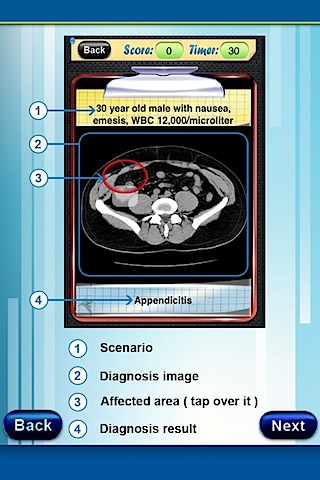 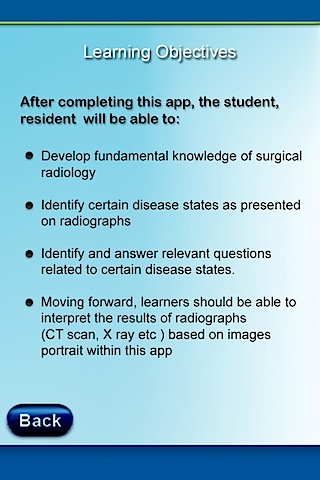 The Surgical Trivia is the question and answer section of the application and will likely be the most valuable. This section first gives an image with an associated clinical vignette and asks the user to press on the abnormality in the image. The user is then given a multiple choice question and 30 seconds with which to provide a response. The images allow for unlimited attempts. However, the user is given four total attempts on the multiple choice with each incorrect response removing a chance. 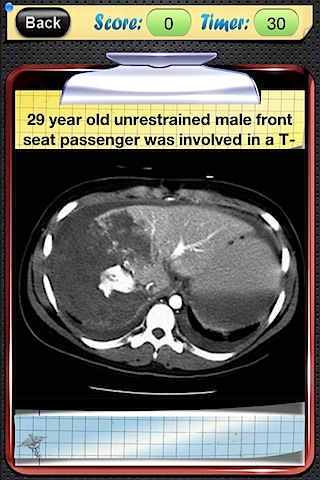 It should be noted that these attempts are per question. That is, the question can only be attempted once in a session so if one does not choose correctly on the first attempt, a second attempt at the question will not be allowed. The questions provided are well written with clear answers. Based on my sampling of questions, they address key topics, such as Meckelís diverticulum, aneurysms, volvulus, fractures and trauma. 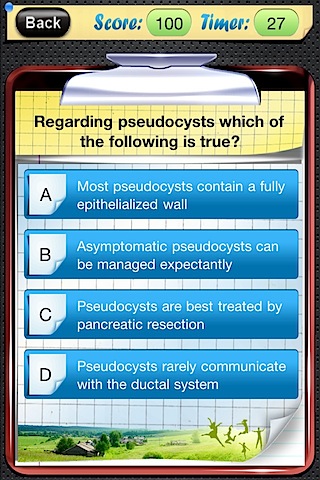 During my usage, I found some of the imaging questions difficult simply because of how precise you have to be when pressing on the screen. If you touch close to a small abnormality but not directly on it, it will count this as wrong and you may be misled to think your solution was not correct. That said, the images provided are clear and take advantage of the high resolution display of the iPhone 4.

It should also be noted that this application natively supports the iPad. On the physically larger display of the iPad, I did not encounter difficulty in selecting abnormalities in imaging. This leads to the possibility that the developers could add pinch and spread motions for zooming on images to the iPhone platform to improve usage for the end user.