Typing on the iPad’s native touch screen keyboard is difficult. For short e-mails — no problem.  But for longer E-mails, and for legitimate productivity, it’s not practical.

More apps are being released on a weekly basis that enable the iPad to be used for productivity.  One of my favorites is Elements, a no frills plain text editor that seamlessly syncs with dropbox, and enables you to store your text content on the cloud.  The app works great on the iPhone as well, and I use it to store notes on disease pathologies and interesting medical cases (No patient identifiers of course).

In a subsequent article we’ll do a review of the app — but for the purpose of this mobile keyboard solution review, the app highlights how a legitimate keyboard is essential for productivity purposes.

There are now a bevy of keyboard cases for the iPad, but the one that gets the most attention is ZAGG’s Logitech Keyboard case.  ZAGG’s prior iteration of their keyboard case, for the original iPad, won many accolades at CES (2011).  Unfortunately, by the time the case was released, the iPad 2 was announced a few short months later.

The unique feature of the ZAGG keyboard case that made it a standout is its innovative sandwich design — not a traditional thick iPad keyboard folio.  Instead, a rather sleek and sexy looking case that utilizes a “pop-up” hinge and a partial case [refer to below pictures].  ZAGG has now released the iPad 2 version of their popular keyboard case, keeping their innovative design essentially the same, but fitting it for the iPad 2’s new design.

Incase, an industry leader in iPhone cases, recently launched their own solution to the iPad keyboard dilemma, the Origami Workstation.  The Workstation is essentially a case for the standard Apple wireless keyboard, but when fully open, allows the iPad to be neatly propped using an innovative Origami solution [refer to below pictures].  The workstation is not exclusive to the iPad 2, and can work with the original iPad as well.

Both iPad 2 keyboard cases are innovative and hope to increase mobile productivity with the iPad.  In this review, we’ll look at each keyboard case solution individually, and then see which one comes out on top.

*Sleek and innovative design.  As mentioned earlier, there is no denying the “cool factor” this case brings.  Being able to sandwich your iPad within the case protects the screen and saves space while still displaying your iPad’s aesthetics.

*iPad feels firm and secure when propped in horizontal mode.

*The keyboard has shortcuts that enable you to access the home screen, search function, and Copy and Paste function without having to touch your iPad.

*Charges via USB, no batteries required. 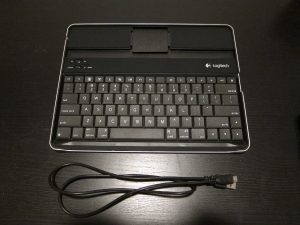 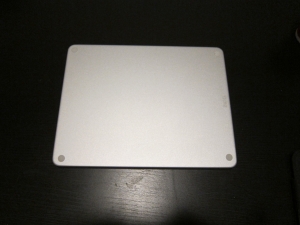 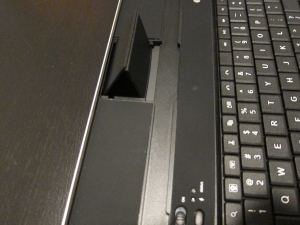 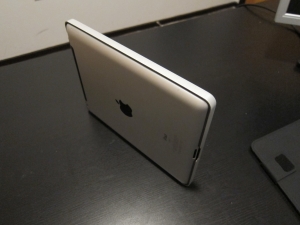 *While the keyboard is not very cramped, it’s analogous to a Netbook’s keyboard size, and could definitely pose a problem for those with large hands.  The organization of the arrow keys are not in the traditional layout in order to save space and can be frustrating.

*Hinge mechanism [above] does not feel very sturdy.  However, with heavy use of the same hinge mechanism on the original iPad Zagg keyboard case, there were no signs of wear or tear.

*When in vertical mode, the iPad does not feel very balanced — touching the top of the iPad (near the camera) causes the entire case to tip back — one of the side effects of such a light case. 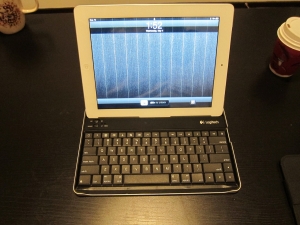 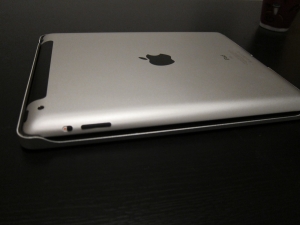 *Uses Apple’s popular bluetooth keyboard as part of its design [The keyboard snaps into place — refer to below pictures].  The full keyboard allows for fast typing, and you don’t have to compromise on space.

*Workstation feels balanced when iPad is in vertical mode, unlike ZAGG.

*Can use Workstation seamlessly even if you have an iPad Smart Cover.

*Works on older iteration of iPad as well as new iPad 2.

*Innovative Origami folding design enables you to adjust the tilt of the iPad display by a few degrees depending on how tightly you align velcro straps. 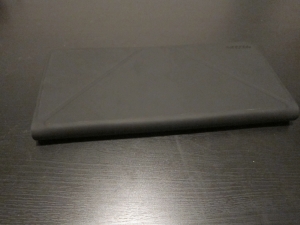 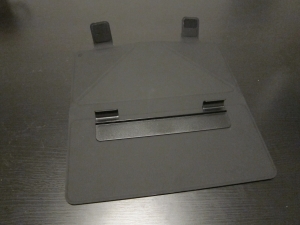 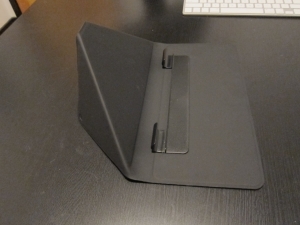 *Obviously, the biggest negative is the workstation does not protect the screen of the iPad when not in use, as the ZAGG keyboard case does. However, the Zagg Keyboard case requires the iPad to be bare, while the Origami Workstation can still be utilized if your iPad has a thin external case.

*The home button might be difficult to access in vertical mode for users with bigger hands.  To counter this you can flip your iPad 180 degrees so the home button is at the top.  For most, having the home button at the base of the Workstation shouldn’t be a problem.

*Although Apple’s wireless keyboard enables you to access music settings and screen brightness, there are no keyboard shortcuts for accessing the home screen and search function — unlike the ZAGG keyboard case.

*I had to exchange the first Incase Origami Workstation I purchased at BestBuy due to one of the Velcro tabs getting ripped off during the initial un-boxing.  After extensive use with another model, I haven’t had any issues. 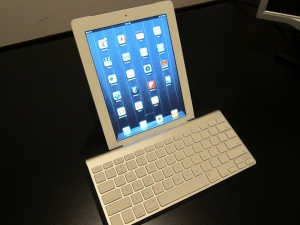 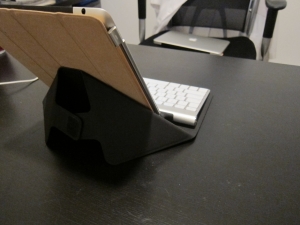 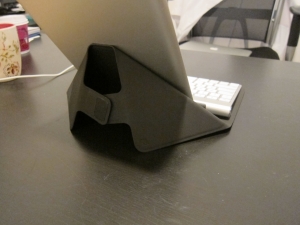 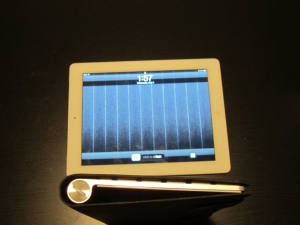 Obviously, the Incase Origami Workstation requires the Apple bluetooth keyboard to be purchased separately.  The Workstation is $29.95, while the Apple keyboard is $69, making the total purchase price about $100.  The Logitech Zagg iPad 2 keyboard case is $99.99.  Essentially, both setups cost the same.

Both cases are available at your local Best Buy.  We’d suggest getting them there instead of online due to some of the above issues experienced with one of the cases.

After using both mobile keyboard workstation solutions for the iPad 2, it’s clear both are innovative designs, and both possess unique positives and negatives.  For both workstations, you could consider getting some sort of screen and back protectors, since the cases expose the iPad when in use.

From a design perspective, the Logitech Keyboard Case by Zagg wins — the case provides some screen protection when not in use, is very aesthetically appealing, and unlike the Origami Workstation, is one sole unit when not in use.

From a functionality perspective, the Incase Origami Workstation wins — the workstation enables you to use Apple’s popular full sized wireless keyboard, while enabling you to prop your iPad in an innovative fashion.

After using both iPad keyboard solutions while traveling, on flights, and in coffee shops, I’d have to recommend the Incase Origami Workstation.  The ability to use a full keyboard — especially Apple’s heralded wireless keyboard — cannot be understated.  I was able to type significantly faster using the Origami Workstation, and while I was initially skeptical of the overall design of the workstation, I have grown to appreciate the flexibility in tilting angles it offers.

Also, when Apple releases another iPad, you’re assured that the Origami Workstation will still be functional — unlike the Zagg keyboard solution that is heavily reliant on the form factor of the iPad it was made for.