In recent weeks, Android-using medical professionals have had good reason for concern.  A study released in April showed that approximately 90% of the traffic through a medical news service was accessed on Apple’s iOS devices, and only 6% on Android devices.

For the time being, it appears that medical professionals – at least those who use their device for medical news – favor the iPhone and iPad.  Furthermore, the senior writers at iMedicalApps concluded in a recent editorial that the iPhone is clearly the best smartphone choice for physicians and other health care providers… for now.

In just the last month, several high quality medical apps from the iOS platform quietly became available in the Android Market.  Among them are WebMD and iTriage, two physician-designed consumer decision support apps, and VisualDx, a highly-rated mobile encyclopedia of dermatology images and information.

The popular website and app for consumer questions about their health. 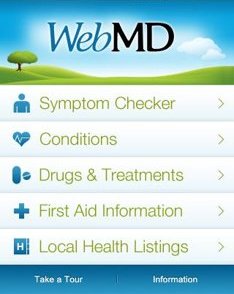 Designed by two emergency room physicians, and reviewed on the iPhone here.  The app is also available in a tablet-optimized (Honeycomb) version. 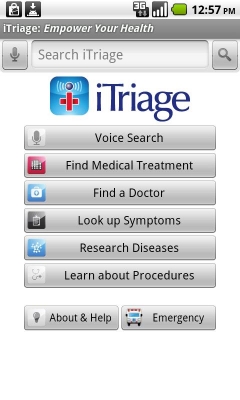 A mobile dermatology atlas.  Reviewed here on the iPhone and iPad.

Other great medical apps already available for Android (from our Top Apps lists):

Ultimately, the Android Market still lacks many of the medical apps that make the Apple iOS so appealing to health care professionals.  For instance, Android users currently only have access to half of our recently released Top 10 iPhone apps for Internal Medicine Residents.  Nevertheless, it should be an encouragement to Android users to see more and more medical apps that gained popularity on the iPhone become available on the Android Market.  More should follow.

Five iOS medical apps I want on my Android for the new medical year: (starting July 1, 2011):

Android users… what other apps do you want to see in the near future?