NoteTaking on the iPad from a physician perspective, Penultimate app review

The form factor of tablets lends itself to illustrating procedures and anatomy to patients with interactive on-screen models or entering notes into the electronic medical record without having to break eye contact with patients.

Penultimate from Cocoa Box Design allows just that with a simple, yet elegant application that has great use in the clinical setting, especially for use for patient education.

The styling is modeled after a leather bound notebook.  When you start a new notebook the app flips open invitingly, and really looks as though you’re writing on a pad of paper.  The attention to detail on the paper itself, using shadowing and texture, results in the appearance of writing on a high quality artists’ notebook. 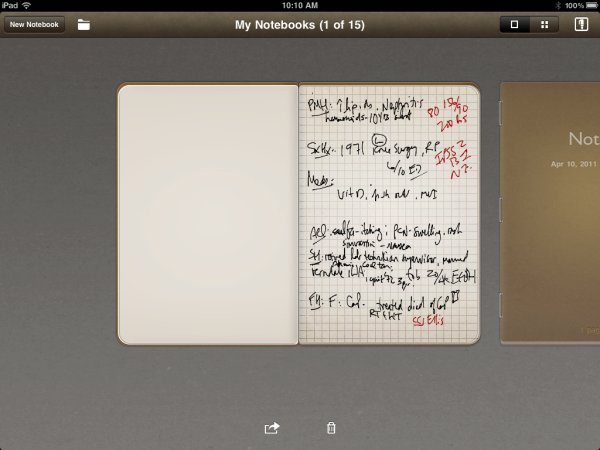 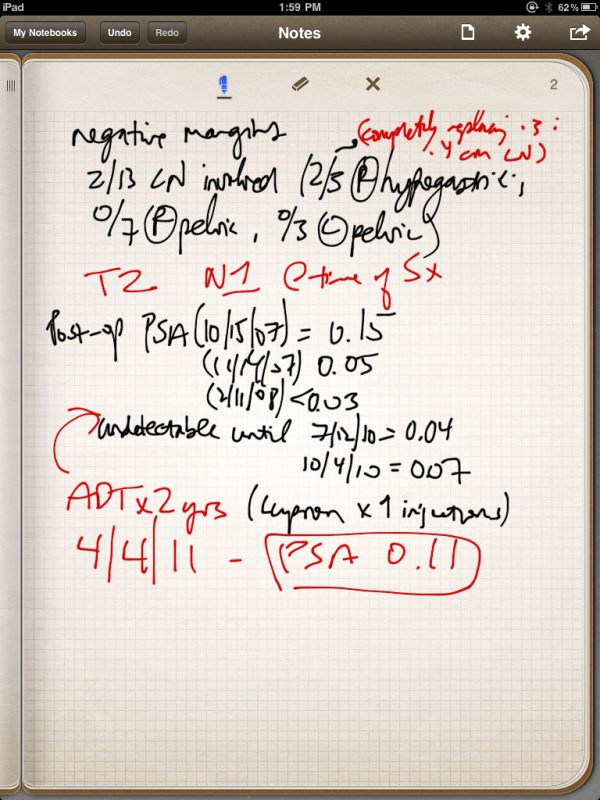 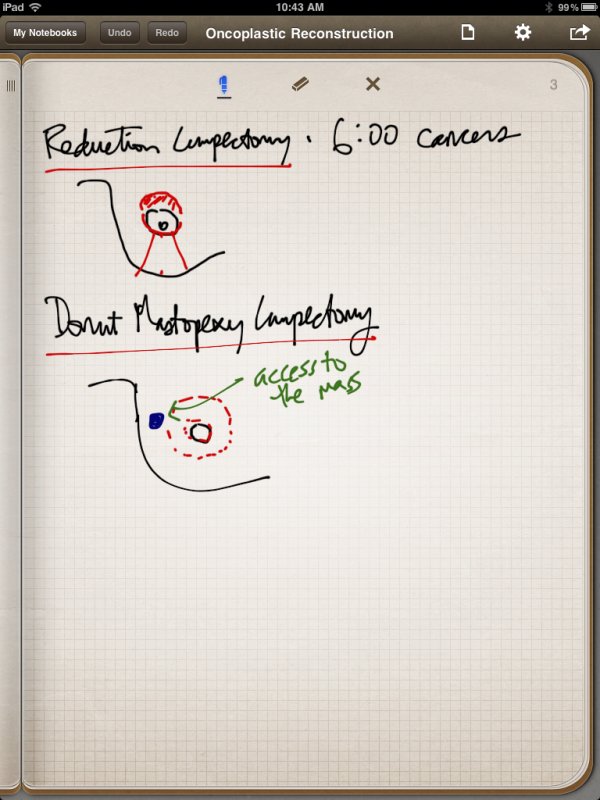 One negative is Penultimate does not allow zooming in on certain portions of the page which is a good work around that some apps use to simulate finer tipped writing.  I’ve used this feature in other writing apps such as iAnnotate, and I use it often to make my notes neater.  This is perhaps my biggest gripe with the app because I am limited by the dexterity of the stylus tip and therefore cannot utilize the freedom of handwriting in the same way that I can with a piece of paper.

For instance, an H&P on paper can often be confined to one page, using different sectors of the page for different areas such as a column down the right side of the page for the past medical history, medications, allergies, etc.  Because the app lacks zooming capabilities, I often run out of real estate and end up taking handwritten notes similarly to the way I would have typed up a note or dictated it over a few pages instead of on one.

While the great visuals makes it look like you’re writing on paper — it feels like it at all.  iMedicalApps’ previous review covered this well, but recognition and precision of inputs are areas that have been a sticking point for the iPad’s capacitive screen which necessitates styli that are quite a bit thicker than a pen tip. The materials required by the capacitive screen are often soft and deformable, not well mimicking the feel of a pen on paper which makes for a serious learning curve. With some practice in choosing the right stylus for you, the user can get the hang of it, but it can take some time.

The app is simple enough to serve its function: a space for thoughts, diagrams, and sketches that you can pen on virtual paper. The features are high yield and add to the apps functionality, including six pen color choices and three line thickness choices.

Personally, in the clinic, I only use black and red ink, and the thinnest line width, but if you are embarking upon a more serious sketching, I could see how the other options could come in handy.  There are undo and redo buttons and an eraser, both features are useful for correcting mistakes.

Penultimate has wrist protection, which helps to prevent any marks your wrist would make if you’re resting it on the screen while writing.  This feature generally works well, but occasionally I’ll have to rewrite text that the app mistakes for my wrist and auto deletes. 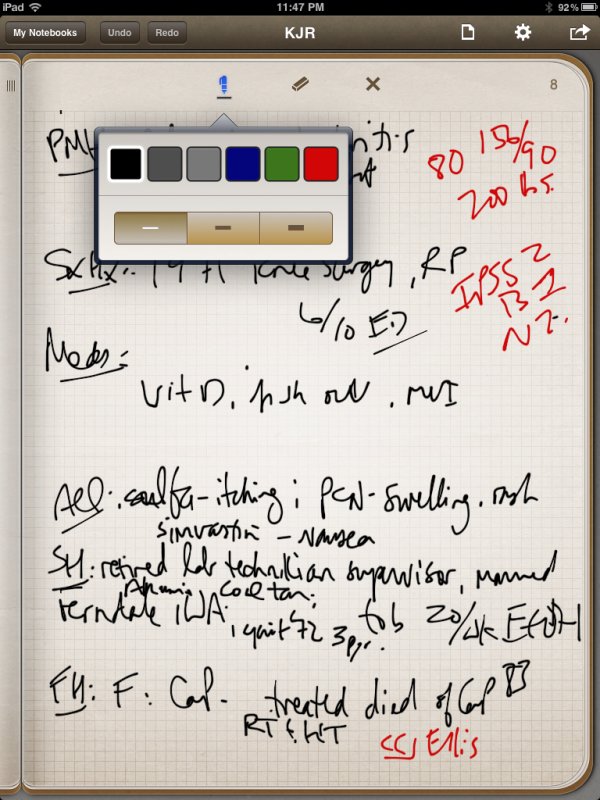 Penultimate has two layouts for organizing and choosing which notebook you’d like to open or share. The first is a horizontal view, which I find slightly limiting, because you’re only able to see three notebooks at once.  To see the rest you have to scroll left to right, which is inefficient and time-consuming depending on how many notebooks you have. 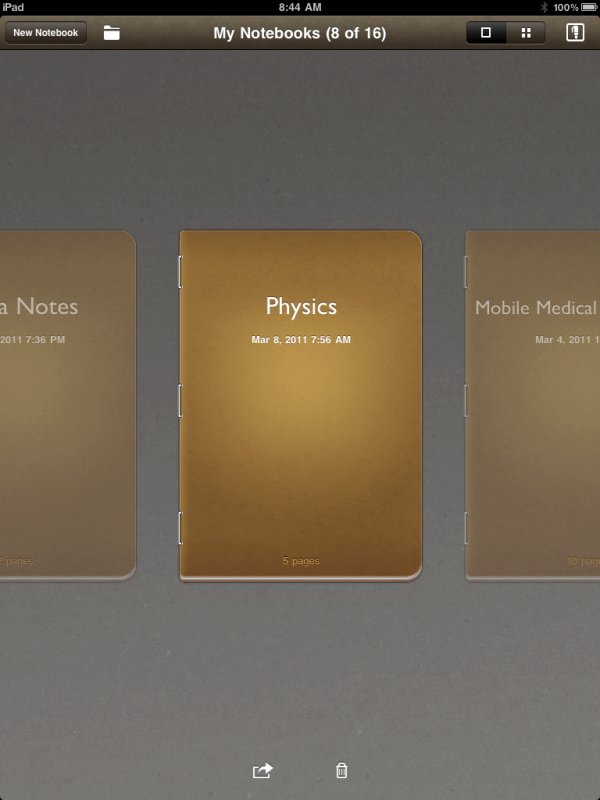 The larger view shows a grid spread with the last edited page of the notebook visible in a gallery layout, allowing quicker access to more notebooks — without having to scroll through them individually to find the one you’re looking for.

Navigation from within the notebooks is rather simple. Simply tapping the left and right portions of the toolbar advances or goes back one page.  If you want to advance multiple pages at once, you can access a gallery view of all the pages in the notebook by sliding over a tab on the left-hand side of the page. From within this view, you can also insert pages between those that you’ve already entered. 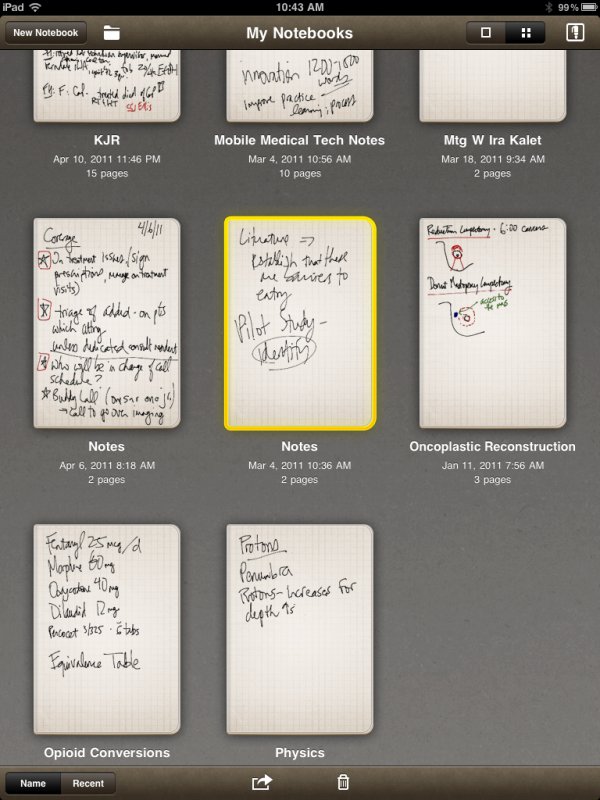 I would have liked to see cloud based backup integration (e.g. Dropbox) included because wired syncing with iTunes is cumbersome.  The app does allow in-app emailing of a single page or a single notebook as a PDF.  It also allows you to save individual pages as an image, not a real solution for backing up your notebook library.

At $1.99, Penultimate is well worth the value and I for one use it every day in clinic to take down H&P’s, take notes in educational lectures, and record minutes at residency meetings.  Providers could potentially use this app for patient education — drawing diagrams or quick notes of a particular procedure or pathology, and then e-mailing them or printing them for a patient.  While the app does have some shortcomings, and may make my handwriting look worse than it actually is, it’s a great way to keep all of my notes in one place and at my fingertips whenever I need them.