[Ed. Check tomorrow for an interview with Mark Cain, CTO of MIM Software.]

One of the most attractive uses for an iPad in the clinical setting is the potential to view radiologic imaging at the point of care. While the graphics capabilities of even the first iPhone were enough to be able to adequately display multi-slice imaging, there were two critical pieces missing to make the iPad a viable mobile radiology workstation: FDA approval and a simple way to store and transfer images to the iPad.

MIM Software, a radiology software company, seems to have neatly solved both these problems by pairing their viewer, Mobile MIM, with MIMCloud, their cloud based radiology (DICOM) viewing and sharing web application and by obtaining the first ever FDA clearance for mobile imaging software in February 2011. The story of their FDA approval process will be highlighted in an interview with Mark Cain, CTO of MIM Software tomorrow.

MIM Mobile is a free download from the App store and runs on both iPhone and iPad. As the video portion of this review will demonstrate, the app is very well engineered with amazingly fluid navigation–even with images containing hundreds of slices. It also performs mutli-planar reconstructions out of the box, meaning that the same body part can be visualized in three planes simultaneously. These are invaluable tools for evaluating imaging abnormalities and for planning surgery. When you take into account that they were executed on a device with limited physical memory and no virtual memory , they are even more remarkable. This might be why MIM was on stage with Steve Jobs at the unveiling of the iPhone software development kit in 2008 and why MIM Viewer was one of the few non-Apple apps highlighted in the recent iPad 2 commercial, as we recently noted .

Use of the Mobile MIM app is straightforward. The iPad version of the app opens to a two column display (in landscape), with options on the left and a list of studies on the right. Your MIM Cloud studies are listed but downloaded only when tapped. One nice feature is that downloading continues in the background, even if the app is closed, using the iOS 4.0 multi-tasking features. This is helpful for time-consuming downloads of large studies over 3g. 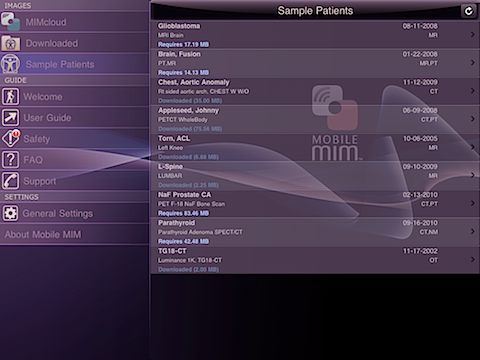 Once an item is downloaded to the device, it is stored locally, with no need to reconnect to the internet to view it again. This can use up local storage but the total local storage is always displayed at the top. Images can be deleted by swiping. On my iPad, the application was quite stable, although I did often receive low memory warnings that suggested rebooting the device may free up more memory. I typically dismissed these warnings and the app continued to work, although, perhaps some features were disabled as a result.  Which ones were disabled was never specifically explained. 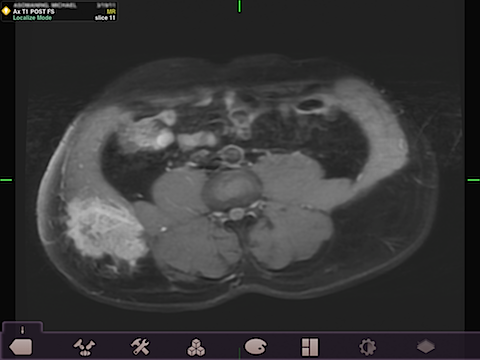 When an item is tapped, it opens in the viewer. Controls at the bottom allow for changing between window presents (bone, brain, liver, etc.). Images will by default open in multi-planar view (as shown below) unless the feature is disabled. My testing seems to imply that the app automatically determines whether this is possible depending on the number of slices and thus the amount of memory required. The iPad2 with its additional on-board memory will probably allow larger image sets.  In my testing, though, multiplanar view seems to be limited to a minority of studies, usually those with less than 30 slices, eliminating most CT sets. Mark Cain reports that the iPad2, with its increased memory, allows for much larger studies, even up to 200 slices, to be seen with multi-planar reconstruction. 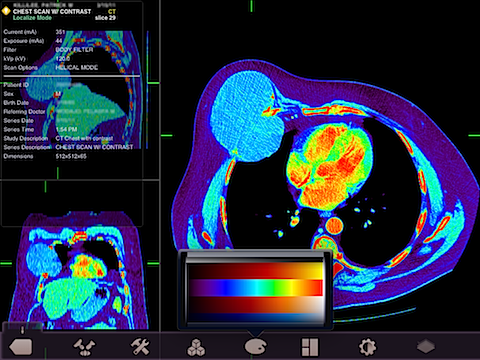 Additional viewing features include distance measurement, an ROI measurement which allows for the radiodensity of a portion of the image to be measured in “Hounsefiled” units or in the case of PET studies, the Standardized Uptake Value (SUV – which quantifies glycolytic activity). Colors can be assigned by pixel values to substitute for the default grey scale (CLUT or color look up table), to make subtle differences more apparent (see above example). Tapping on the patient’s name in the top left hand corner will expand an overlay with image details, such as acquisition time and technique.

Navigating among series is performed with a quick flick across the screen. Alternatively, the list of series can be viewed by tapping on one of the tool bar icons. There sometimes seemed to be slight lag with activation of these controls, perhaps reflecting memory usage. On other issue with the viewer is that the image list is not grouped by patient.  This would have simplified locating a particular study when there are more than a handful of studies.

To see Mobile MIM in action, check out this video:

While other iPad radiology viewers are now available, such as OsiriX HD, Aycan xr.ay, Merge & ResolutionMD, one feature that sets MIM apart is that it offers MIMCloud, an integrated, cloud-based DICOM service that makes storage and sharing of imaging studies very simple. The other solutions either require direct (WiFi) transfer of images to the iPad from a desktop workstation or directly from a radiology department server (Picture ArChiving System or PACS). Once in MIMCloud, any image study can be downloaded to the iPad. Clearly, the download will be faster on WiFi, where it takes usually less than a minute. Using a cellular 3G connection took 7-8 minutes to download a mid-sized (35Mb) MRI study in my tests. 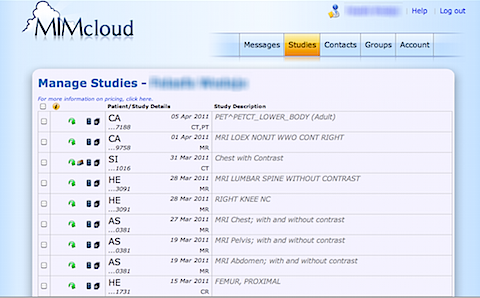 In addition to downloading to the iPad, images can also be viewed from any web browser using the platform-independent Java MIM Viewer (below). One very useful feature of MIMCloud is the ability to share images with other account holders. Setting up an account is free and since there is an included a web-based viewer, it means that you can refer a study to another physician simply by entering their email address.

Since the DICOM data can be downloaded from the MIMCloud, this means that exchanging imaging CD ROMs between doctors can now effectively be a thing of the past. 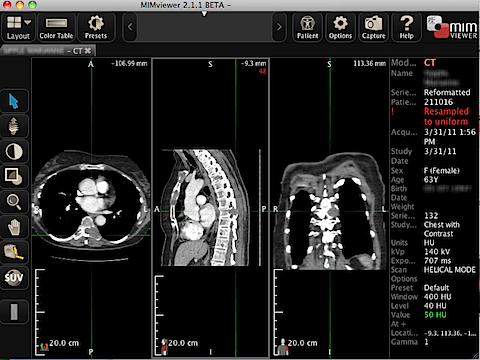 The MIMCloud web application is fairly workman-like, with just the necessary options available to manage studies and share them with other physicians. Like the mobile app, each study gets its own row.  Since the studies are not grouped by patient and names are only displayed as initials, the list is difficult to browse. A search feature makes it easier to locate a particular study.

A more challenging problem at the current time is that uploading a DICOM study to the cloud via the downloadable Java app is still clunky. The uploader only recognizes studies if they are stored in a physical folder, so if you are using OsiriX as I am, the study first needs to be exported to a folder on a disk. After that, each sequence seems to generate a warning dialog that it is a “non-standard orientation” meaning that it cannot run unattended for the several minutes it takes to upload a complete study. The Java app seems to also be something of a memory hog.

Mark Cain has specified that the upcoming revision to MIMCloud will address both these concerns. In particular, a new Java background service will be built that will represent itself as a “DICOM node” to any PACS server, including OsiriX. (A DICOM node is a kind of a standard “address” in DICOM-speak). Thus, in the future any study can be directed to MIMCloud with just a few clicks and uploading will occur in the background. Collaborating physicians’ MIMCloud accounts can even be designated as “nodes” so that a study can be sent directly to their accounts without intervening steps. This will greatly simplify the process and will be a welcome upgrade.

The pricing schema is a bit complex. As mentioned above, the app itself is free. Charges are incurred when a study is uploaded to MIMCloud or downloaded to a mobile app for viewing or when viewed using the web-based MIMViewer.

According to Mark Cain, after the April 2011 MIMCloud 2.0 update, the pricing will be as follows:

For radiology departments, bulk pricing and invoicing are available. Personally, I would prefer a monthly subscription fee instead of a per study fee. Perhaps in the future that will be offered as an option.

MobileMIM and MIMCloud are a great way to view, store and share radiology imaging. The Mobile MIM is a great piece of iOS software engineering, with remarkably fluid navigation throughout even large study sets. The ability to perform mutliplanar imaging and locate a structure in three planes simultaneously is very useful. Using MIMCloud to share imaging studies greatly simplifies communication and removes an important pain point, while the updates to uploading studies coming with MIMCloud 2.0 will also be very welcome.

We understand MIM has received much attention from physicians following the announcement of their FDA clearance. From this experience, it seems the attention is well deserved.