How the iPad radiology app MobileMIM became the first to get FDA approval: Interview with CTO Mark Cain 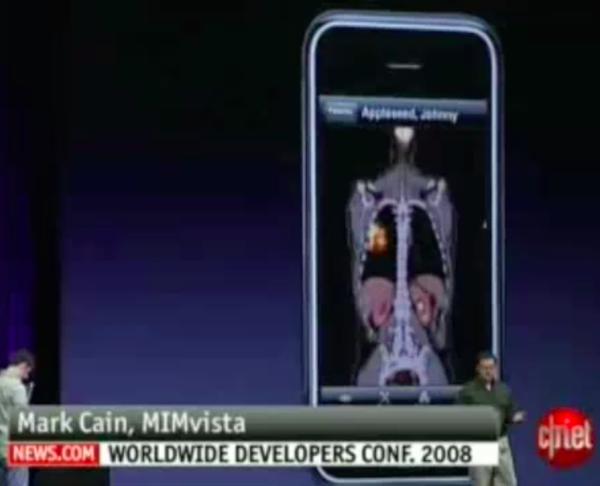 One of the exciting early promises of the iPhone for doctors was its potential to present imaging studies, such as CT & MRI while on the go. Early on, many did not suspect how powerful was the “small touchscreen computer that makes phone calls”, in the words of Mark Cain. So, when OsiriX for the iPhone, the first CT/MRI (DICOM) viewer for a smart phone, was released in November 2008, it was an impressive introduction to the potential for mobile medicine.

At about the same time, a radiology software company MIM Software (previously MIM Vista), also became interested in the potential of the iPhone. The company was started in 2001 when its founder Dennis Nelson, then a biomedical engineer at Cleveland’s Case Western radiology department, noticed how difficult it was for physicians to read combined PET (positron emission tomography) & CT studies. He wrote software to “fuse” the two images into one which eventually became the company’s first and ground breaking product.

In this interview, Mark Cain, CTO of MIM Software, shares with us how they first developed an iPhone viewer for DICOM (CT & MRI) images. The software was so impressive in its early incarnations that Mark Cain was on stage (video)with Steve Jobs at the 2008 WWDC where the iPhone SDK was the main topic and it went on to win one of Apple’s coveted design awards in 2008.

He also tells the story of their submission of the software for FDA clearance in 2008 as a medical device. After four previous submissions to the FDA for various radiology imaging software, he thought he understood the process. But what ensued was an up and down 2 1/2 year journey before their mobile DICOM viewer was finally approved by the FDA in December 2010. This difficult process gives us a window into the short history of the rapidly evolving world of mobile medical software and devices. It also demonstrates how much of what doctors actually get to use is dependent on the regulatory and other non-clincal aspects of the tools.

Be sure to check out our recent review of the iPad app Mobile MIM viewer, the first FDA approved mobile DICOM viewer and their cloud-based DICOM sharing web-application MIM Cloud.

How did you decide to build an iPhone app ?

The company was incorporated in 2003 and originally made its name with software to perform PET CT fusion. Later we expanded to radiation oncology with contouring tools that allowed deformation of treatment fields and PACS solutions

When the iPhone SDK came out in 2008, almost on a whim, we thought we would see if we could make an imaging tool. We had good programmers but they had never written in Objective C [the programming language of iOS]. Jerimy Brockway and David Watson worked at home for 1 week and at the end of that we had a functioning prototype that convinced that this was real. We spent another month ironing out the kinks. At the end of that, we had an application that, despite the memory limitations of the device, could perform mutiplanar reconstruction on a smartphone. It was not long before we realized this was going to be a product that could change the direction of our company.

We were dealing with an Apple developer relations person who wanted to see it. So, we sent a video. Apparently, it got passed around and got noticed. A little while later I was invited on to go on stage at WWDC 2008 with Steve Jobs. They had a bunch of developers but most of them were games and other social apps.

When did you decide to submit it to the FDA ?

After we showed the app to a few radiologists, we knew we would go to FDA with it. We put it out on the app on store for free on Day 1. We knew that the FDA governs commercial distribution of devices so we thought a free app would not need approval. But when they found the app in the App Store, they ordered us to take it down. It turns out that, because the FDA also governs the marketing of medical devices, the app could be construed as marketing our other products. In effect, we were marketing a product that was still under review. So it wasn’t a question of cost.

What did it take to get FDA approval ?

We submitted it in July 2008. Within 1 week, there were a lot of questions and a lot of confusion. The FDA was confounded that we were not making hardware. The fact that it was a phone was confusing.

Previous to this, we had four previous 510k applications processed by the FDA and the process for us was very smooth. [Ed. a 510k application compares a new device to an existing one] Our predicate was one of our own viewing software.

Our submission fell apart, and was eventually closed due “not substantial equivalence to a predicate device” (NSE) The reason given was that there was insufficient information. Obviously we needed to get them more information but we got no useful feedback, we got some feedback but not good questions. Typically, an applicant gets response within 90 days but we got nothing for months, even despite calls. We were told we were on an “extended track”, though not sure that even exists. Finally, after 221 days, we got an NSE letter in Jan 2009.

As a new device type with no predicate, we got bumped up to Class 3 Premarket Approval (PMA) which is the same classification as high risk devices, like implants. The de novo device clearance process was not well defined and has no time line. We called one of the directors and were told that the decision was unanimous, and that even a de novo would be very unlikely to succeed, so don’t bother appealing

We decided to go for a PMA application as a Class 3 device. We would need to get an investigational device exemption (IDE) to allow us to test in the clinical setting. This would require us to build a complete protocol, specifying users & usage, etc. We hired consultants.

At about this time, changes were afoot for the CDRH [Ed. the part of the FDA that evaluates radiology devices]. The FDA ombudsman said try an appeal anyway, saying the personnel had changed. So, we got to state our grievance, met the new FDA people who told us to resubmit 510k application if we can address their concerns.

We settled on indications for use they were comfortable with, specifically “diagnostic display of CT/PET/MRI/SPECT modalities when radiologist does not have access to a PACS workstation”. [Diagnostic] xray is not included due to the resolution (2000-4000 pixels). We got them clinical information and resubmitted Summer 2009, which was also when AirStrip was cleared, so we included them as a predicate device although it probably did not make any difference.

This time, the process was very different. We had a new reviewer, we got feedback. We did measurements on display brightness & contrast. There are standard measurements for other viewing devices, e.g. mammography equipment. The focus was on the viewing experience, and thus safety, not as much on the user interface, although we do state that network capacity can affect experience, for example.

Will graphics improvements in iPad2 make any difference ?

Yes. The speed and additional memory will make Mobile MIM extremely pleasant to use. More memory means even larger data sets can be displayed as multi-planar reconstructions.

Do you have plans for Android versions ?

We did not even know if we could sell it because of the FDA which took 2.5 years [of regulatory work. To get it cleared on Android, how many devices would we have to test ? It becomes a time and resource issue. The iOS environment has been very stable and the devices homogenous. The fact that the 2008 software is basically the same as today is a testament to consistency of platform