Over many years, the quality of the computerized transcription has improved to the point where many practices have easily been able to give up more expensive human transcription services. At the same time, Dragon – since renamed Nuance, has grown in size and scope, buying or overwhelming much of its competition.

But medicine is mobile and the ability to dictate without being tethered to a desktop computer and microphone or needing a specialized digital recorder remains a real imperative for many docs.Thus, when Nuance released Dragon Dictation, a free app for general (non-medical) mobile dictation in December 2009, many doctors took notice of its potential.

Now, Nuance has released Dragon Medical Mobile Recorder, an iPhone app that interfaces with their enterprise-class speech recognition engine eScription. It will no doubt become a favorite app for many doctors – but only for those lucky enough to be at an institution that subscribes to eScription, since there is currently no individual or small group option.

The app is a simple and easy to use front-end for dictation that allows the doctor to select the patient, document type and speak directly into the phone. Carriage controls allow recording to be paused, played back and overwritten. Once the dictation is complete, it can be sent over 3G or WiFi to the background transcription engine which then returns it to the iPhone for viewing. 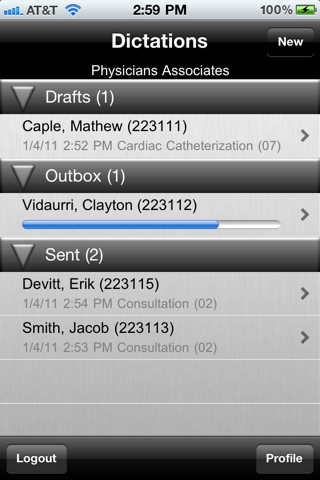 Unfortunately, while the iPhone app is free, Nuance is apparently not making a demonstration account available for the eScription transcription engine. This is unfortunate since we cannot fully evaluate the transcription accuracy of the iPhone app. While the general purpose Dragon Dictation app received an enthusiastic review by David Pogue of the New York Times, in my tests it cannot comprehend most medical technology and serves as as poor substitute.

Nuance is making many exciting moves into mobile medical transcription. We are aware of at least three iPad based EHRs that have incorporated the Nuance software development kit (SDK) to allow dictation directly into the app, including Epocrates, as we recently reported. In addition, Nuance is using advanced natural language processing to identify key words in transcriptions, such as diagnosis name and automatically build structures medical documents. It calls this technology “Clinical Language Understanding” and describes it as

Hopefully, Nuance will continue to make these exciting technologies available to even more doctors in the future.