Everyone’s favorite resource — Wikipedia — helps define the Bayesian interpretation of probability: “To evaluate the probability of a hypothesis, the Bayesian probabilist specifies some prior probability, which is then updated in the light of new relevant data.”

Applied in the medical setting, Bayesian reasoning involves the clinician developing a pre-test probability for the likelihood of a diagnosis, and only then ordering a test whose quality is measured in terms of sensitivity and specificity.

Unfortunately, many clinicians — myself included — do not often think about diagnosis in this Bayesian manner when practicing medicine and ordering diagnostic tests. Read below the jump to learn more about this app that promises to facilitate the use of Bayesian reasoning in medicine.

We’ll go through sample diagnostic situations, showing how this app has the potential to change the way you order diagnostic tests for your patients.

Here we review the Rx-Bayes application, developed by Drs. Zain Hakeem and Atif Shahnawaz. Drs. Hakeem and Shahnawaz are residents nearing the end of their training in Peoria, Illinois. They designed the Rx-Bayes app in an attempt to “assist clinicians in using Bayesian reasoning at the bedside,” and argue that “Bayes’ theorem basically means that the act of running a test is nothing more than achieving a post-test probability for a diagnostic hypothesis.”

The app’s main screen features a series of 5 vertical bars. The first three are adjustable via sliding, and, from left to right, represent pre-test probability, test sensitivity, and test specificity. The last two bars reveal positive post-test probability and negative post-test probability. The utility of this app is in the included values for both pre-test probabilities for clinical diagnoses as well as the sensitivity and specificity of common diagnostic tests, which are then imported into the main screen parameters with a click. Note, along the bottom bar of the app, buttons for Pre-Test, Test, Custom Tests, and Info.

As an example, let’s take the diagnosis of pulmonary embolus (PE) in a clinical case. Clicking on Pre-Test opens up a searchable list of the diagnoses included in the app. Finding PE gives us the options of the Modified Wells Score and the Geneva Score.

Let’s say, for instance, a 54-year-old male without a history of cancer who has been bed-confined since a MVA (motor vehicle accident) 1 week ago, presents to the ER with progressive shortness of breath over 3 days as well as hemoptysis. He is febrile and tachycardic, and chest X-ray reveals a pneumonia. On physical exam, he does not have any lower extremity pain, swelling, or tenderness.

Using the “Modified Wells” pretest probability of PE, this patient scores a 4 (HR >100 bpm for 1.5, immobilization for 1.5, hemoptysis for 1), categorizing him as “intermediate probability” (score of 2-6). Clicking on our category of 2-6 gives us a 29% pre-test probability for the diagnosis of PE and automatically applies it to our first vertical bar (pre-test probability) on our main screen.

As shown here, the D-dimer test has a sensitivity of 95% but a specificity of only 39%, per the cited reference from the systematic review published in the Annals as noted below.

Clicking on the D-dimer test imports the parameters of this diagnostic test into our main screen, and in conjunction with our pre-test probability calculated via the Modified Wells’ scoring system, shows that our post-test probabilities would be 38.9% (with a positive D-dimer) or 5.0% (with a negative D-dimer).

Now, what about conducting a different diagnostic test for PE, say a V/Q scan or a PE-protocol chest CT scan? Let’s take the CT scan, which has a sensitivity of 83% but a specificity of 96%. Importing these values into our main screen yields post-test probabilities of 89.4% (with a positive CT scan) and 6.7% (with a negative CT scan).

Thus, a positive CT scan makes it much more likely this patient has a PE compared to a positive D-dimer alone.

Similarly, users can run these numbers for diagnoses like coronary artery disease, deep venous thromboses, breast cancer, and many infections. Moreover, users can both request pre-test probabilities and add tests of their own to be uploaded to their personal database. 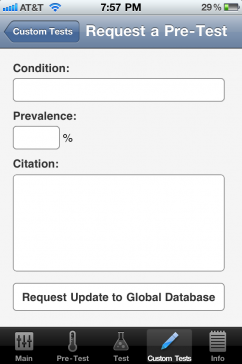 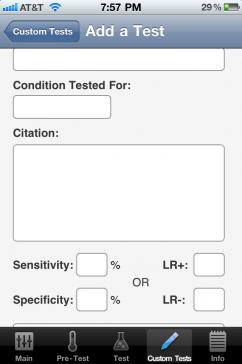 Of note, the developers have also made a YouTube video demonstrating how to use the Rx-Bayes app in the clinical setting:

Pricing: The Rx-Bayes app costs $0.99 on the iTunes Store.

– References cited for the pre-test probabilities and the sensitivity and specificity of various diagnostic tests (we love evidence-based medicine here at iMedicalApps!)
– Intuitive user interface with a very visual main screen
– Ability for a user to add his/her own data for additional diagnoses or diagnostic tests –> expanding database
– Great teaching tool for medical students, and allows for the ability to document probabilities based on landmark journal articles

– Simple Bayesian analysis in a vacuum is not the only factor driving diagnostic decision-making on the wards → medico-legal, social, and educational issues also impact real-life clinical decision-making
– Limited to only several diagnoses and tests (though more can be added by the user); would still like to see more loaded with the app
– Not customized for the iPad

The developers love to cite Sir William Osler’s remark that “Medicine is a science of uncertainty and an art of probability,” and it is clear that their Rx-Bayes app is a step towards addressing clinical medicine in that vision. We as clinicians do not utilize Bayesian reasoning enough when ordering diagnostic tests, and unnecessary tests are often ordered on the wards. Even though its utility is limited to only several diagnoses, this app is well worth its $0.99 cost because it affords clinicians clear and visual insight into how ordering certain diagnostic tests will influence the likelihood of diagnoses in clinical decision-making.