Why locked Android tablets will beat the iPad for hospital use

[Ed. On Thursday, we will publish an opposing viewpoint from another editor. Let us know what you think in the comments section.]

The rush of manufacturers to bring tablet computers to market was much in evidence at the 2011 Consumer Electronics Show (CES) and at the Mobile World Congress in Barcelona. The tablet market was essentially created by Apple with the introduction of the iPad in April 2010, who has gone on to sell an astonishing 15m of these devices in less than a year. The iPad 2, introduced last week, promises to extend these sales numbers.

There has also been tremendous enthusiasm in the medical world for the iPad, with most of the major medical apps now optimized for its larger screen and user interface. At the University of Chicago, internal medicine residents received iPads as part of a pilot study and are giving it “rave reviews“, relishing the ability to access patient records while on the move and to share information with patients at their bedside (see this news clip). Medical uses were even highlighted in the iPad video during the Apple March 2 press event.

With dozens of new manufacturers rushing into the tablet market in 2011, many of them running versions of Google’s Android operating system, the market dominance of the iPad will clearly diminish. Nevertheless, the iPad and other iOS devices will remain a massive market for app developers who will aggregate wherever there is a large customer pool for their products.

However, I believe the deployment of clinical apps specifically will follow different signals. In particular, I predict that tablets meant for real-time clinical use will run locked versions of Android, that allow interaction exclusively with clinical information systems, and be provided by hospitals and other institutions.

The reasons for this include: 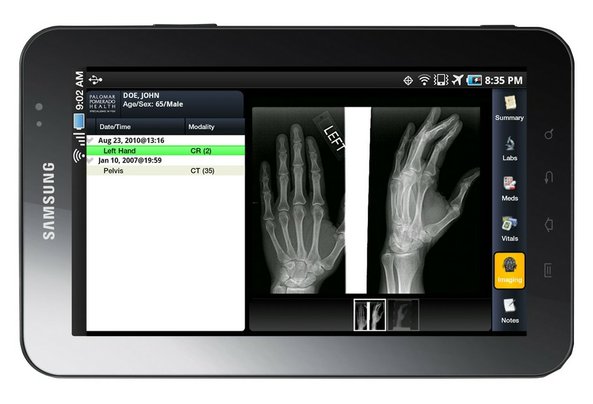 Recently, Palomar Pomerado Health, a large hospital system just north of San Diego, announced the development of a tablet application that will allow their physicians full access to patient health records. Already promised is connectivity with three major EHRs: Cerner, NextGen and the Veterans Administration’s VistA system. The application was previewed at the recent HIMSS meeting in Orlando. It was developed using the Android mobile operating system and was funded in part by Cisco, who is providing the wireless infrastructure for a planned new hospital by the health system.

This announcement is interesting in a few key respects:

The latter point is highlighted in this quote regarding the app:

It sounds like it’s really cool and valuable …, but I suspect the real value is in the back office cooperation that needs to exist to access the data.

Integrating patient data across multiple clinical information systems and EHRs is difficult, unglamorous work. However, the relatively easy revenue from paid downloads will become a diminishing source of revenue in the future. Specifically, Research2Guidance predicts that, in the future, value will revert to device sales, monitoring & other medical services and advertising. This will further reinforce the model of apps distribution by health and IT providers, rather than being selected and downloaded by end users. 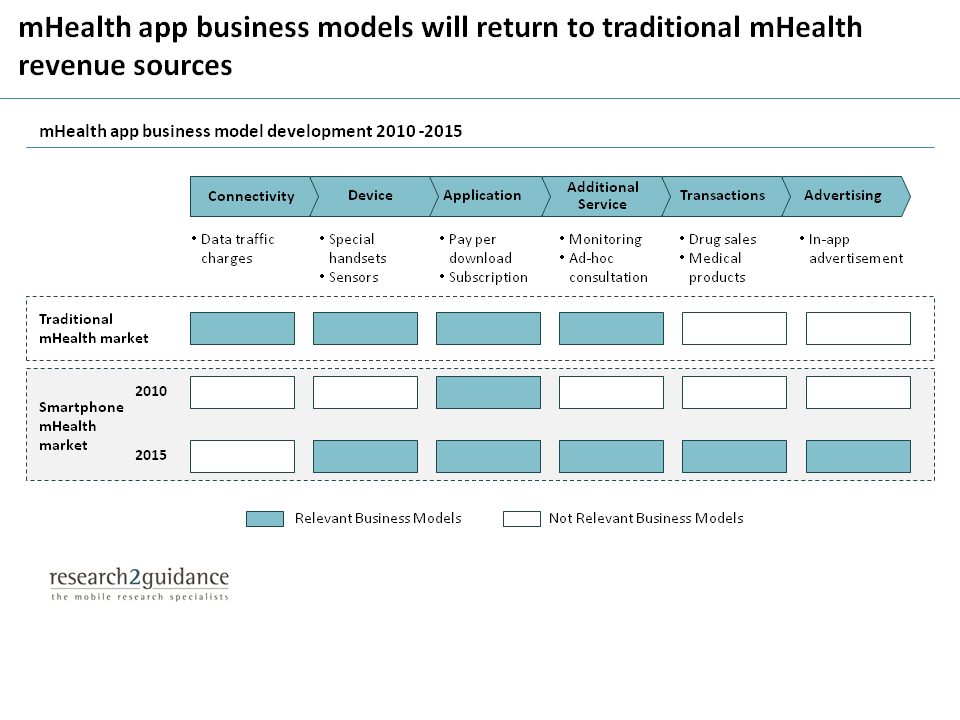 I would expect that the actual tablets will be provided by hospitals or EHR vendors, as free incentives, or at low cost. As above, the devices will have the apps preloaded and the operating system will have been modified so as not to allow any other user interactions or access to the Android market. This will greatly simplify provisioning and maintenance of the devices while the hardware will be kept to the bare minimum necessary to run the applications. Note also that we recently reported that Samsung is augmenting Android with new APIs to “make more secure and enterprise compatible apps” for Samsung phones and tablets.

Finally, for those keeping score on Apple vs. Google in the mobile space, what does this mean ? Apple is a hardware company and not terribly interested in commodity hardware and low-margin enterprise pricing. Thus, it may not loose too much. Google is an advertising company and uses Android to collect information on its customers and display ads. If these devices do not use Google’s own apps, it does not get customer data. However it benefits by getting more developer mind share, which increases the value of the platform as a whole.

In conclusion, Apple’s iPad is a highly refined and capable device which can rightfully be said to have revolutionized computing. It will, however, not be the device most likely used by physicians to access patient records in the future. Furthermore, since the value and power of future medical apps will depend on their ability to access patient records, the evolution of the medical app world will likely be influenced by the platform decisions made in the near future.