iPrescribe turns your iPhone into a prescription pad

To use it, the doctor only has to enter the patient’s name, date of birth, drug and dosage. Favorite prescriptions can be stored. If the patient’s zip code is entered, the app will even suggest nearby pharmacies. The magic is that once you touch “send”, all that is left is for patient to pick it up the pills at the drug store. No more holding on the phone or fumbling for a script pad. It is an enticing proposition for many doctors.

iPrescribe was just recently released to the App store and uses the SureScripts national e-prescribing network to process the electronic prescriptions. By utilizing this network, iPrescribe thus has access to pharmacies in just about every community the US. Only qualified medical professionals with valid NPI and DEA numbers are allowed to use it. In addition to the $19.99 download fee, there is a $9.99 monthly subscription fee, following a free 30 day trial. Doctors who already have e-prescribing included as part of their electronic health records (EHRs) may not have need for a separate app.

I found the app easy to use with a clean, well-thought out interface. The web interface, where you could also add and edit patients, is less polished. The main drawback of using app is the most obvious one, namely that the any prescriptions entered will have to be recorded separately into patients’ charts, although the web interface does allow for export of prescription histories. 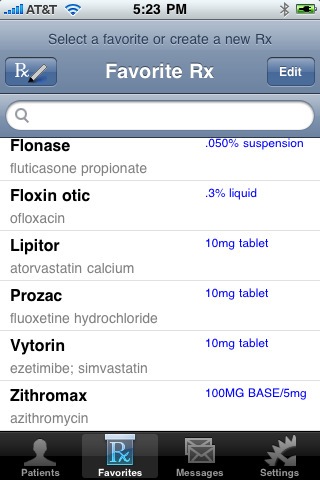 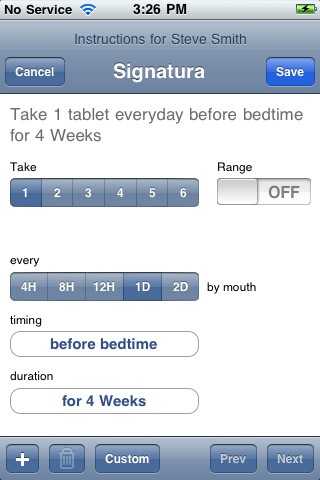 Patient and prescription information is encrypted before transmission . For additional security, the app requires you to enter a 6 digit code, emailed to you at installation, every time the app is launched to prevent unauthorized use. Opiates, i.e. schedule II drugs, cannot be prescribed electronically so you don’t have to worry about your iPhone now being the target of crazed drug-seeking thieves.

For the more computer-savvy, patient information can be imported into the app in large batches by uploading files in CSV format. Unfortunately, the site provided scant documentation on how to do this, such as the expected name and number of the columns, nor were the error messages very edifying. I am sure with assistance this would have been feasible but a reasonable expectation should be that it can be done without calling tech support. However, once patient information is entered on the site, it can almost instantly be uploaded to the device. Similarly, any interactions performed on the phone can be reviewed on the website. 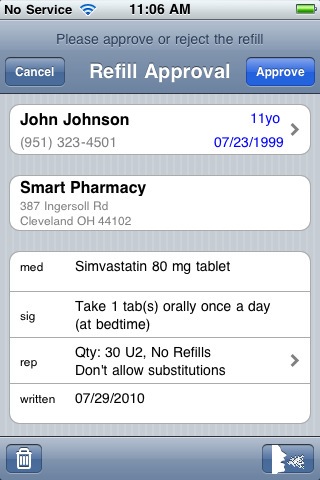 The app comes pre loaded with over 3,500 FDA approved medications including all available dosages. Once a prescription is entered, the app offers you to save it as a favorite, saving steps the next time the drug is prescribed. Note that If you use another e-prescribing solution, you can only receive refill notifications with one provider.

Surescripts, which calls itself “the nation’s e-prescription network”, was founded by the drugstore industry’s two largest trade groups in 2001. Every major pharmacy chain participates, and Surescripts is now expanding its network’s capabilities to participate in the National Health Information Network to allow interchange of even more health data.

According to SureScripts 2009 annual report,  e-prescribing has reached a “tipping point”, citing these findings:

Almost certainly, these numbers jumped again in 2010, especially with federal meaningful use incentives and CMS directives to Medicare Part D to participate in e-prescribing, Although reporting of patients’ pharmacy benefits and complete prescription history are the other two components of e-prescribing, the app does not currently appear to provide access to these information.

iPrescribe is leading the path for iPhones and other portable devices to more completely become tools of the doctor’s trade. While 78% of e-prescriptions (in 2009) were entered within an EHR, that leaves a large number entered through standalone software. Although I doubt that the prescription pad is quite ready for the trash heap of history, clearly the combination of decreased errors and increased convenience will make handwritten prescriptions more and more a quaint relic of the past. For physicians with iPhones, who do not have ready access to e-prescribing through their EHR, iPrescribe is a highly attractive option.