Editors Note: We have done an updated post on the best note taking iPad apps, with a focus on the apps that have a “zoom” feature. Make sure to read this post!

The iPad 2 is upon us, and offers the same experience for stylus input for handwriting and note taking as the original iPad.

This final article in a three part series on handwriting and the iPad brings us to the various apps that developers have created for the clear purpose of translating strokes of the pen or finger to the screen.

My first article was about why the iPad needs better handwriting support, and the second article compared several iPad styluses on the market.

To begin, I first created a simulated patient note with traditional pen and paper (below image). I tried to create a sample that utilized a lot of the previously discussed strengths of handwriting, including abbreviations and complex spacing throughout the paper. I then set about making sure I had the most recent updates for the software reviewed (current as of March 5, 2011). I have been using these apps to various degrees over the past 3 months, so I then set about using each app to best recreate the sample note. 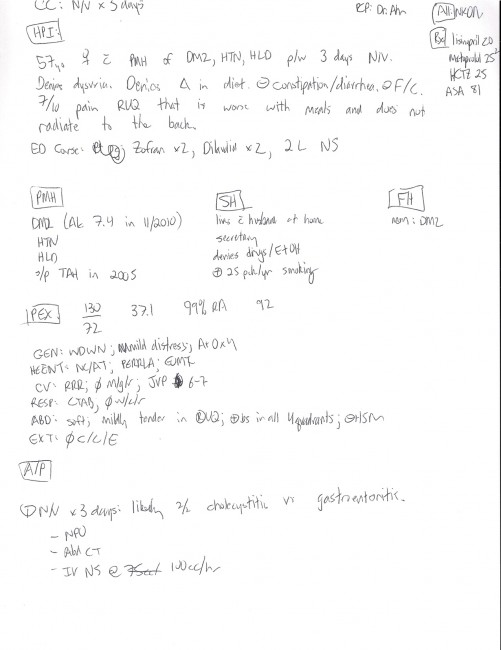 The primary criteria for evaluation was how effective the app was able to re-create this traditional paper and pen produced patient note using an iPad stylus pen. Secondary features were also evaluated, and apps received high marks for supporting synchronization services such as DropBox or Google Docs. They all essentially offered multiple pen thickness, colors, printing, and exporting to PDF, so these features were not mentioned.

The apps reviewed fell into three overall approaches when creating the interaction between a stylus and iPad: One to one note taking, handwriting with Zoom feature, and handwriting recognition.  This comprehensive review will compare the apps in each category and discuss the strengths and weaknesses of each approach, as a whole.

The Plain and Simple Approach: Good, But Not Great

The first approach is a very straightforward one that acts exactly the way you’d expect when you think of the iPad as a notepad. The screen is a piece of paper, and your pen or finger is the pen. It’s incredibly simple, but there’s a huge glaring problem with this: you’re writing utensil is just too blunt. It’s near impossible to fit enough writing on the page. This approach might be useful for simple notes, lists, or drawing, but falls flat when you’re trying to write longer notes.

PaperDesk LITE is free, and unfortunately, that’s where its strengths end.  The app is too clunky to recommend, unless you insist on not spending money. Because of the limitations of this plain and simple 1:1 approach, there was not enough space to write the note on the screen.

It has a rich feature set which is consistent with all the other apps. It also has the nice touch of allowing you to sync to Google Docs. It’s UI is decent and is overall fairly polished, although it does look a bit simplistic in certain aspects. 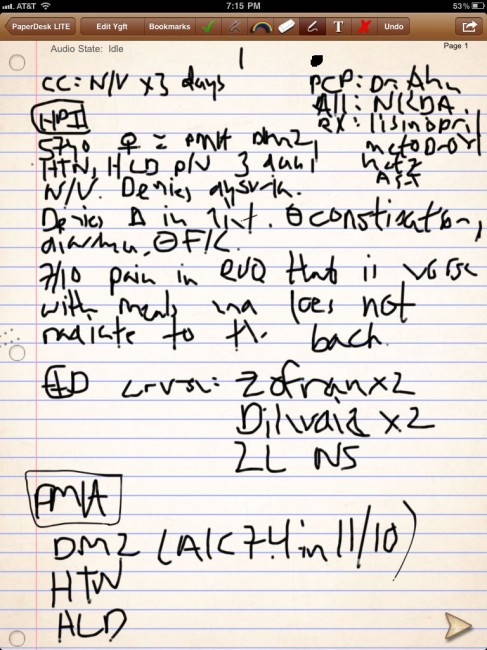 In addition to having the most clever name of the bunch, Penultimate really makes the most of the plain and simple approach. It’s been prominently featured by Apple in TV commercials and in the App Store, and for good reason. Its UI is beautiful and takes after composition books. It’s incredibly simple to use: tap on the pen to write, tap on the eraser to delete. No complicated features, and it works well.

One bonus feature is this app simulates brush strokes, the only one to do so in this comparison review. I say simulates because unlike older tablets for graphics, the iPad does not support pressure-sensitivity. However, Penultimate simulates some pressure-sensitivity based on the speed and direction of your strokes. If you look at the writing sample closely, especially on the boxes around PMH, you can see that there is some variation of thickness.

However, overall, the app suffered from the same problem as PaperDesk, in that the one to one translation of screen to paper did not leave enough room for the thick stylus. 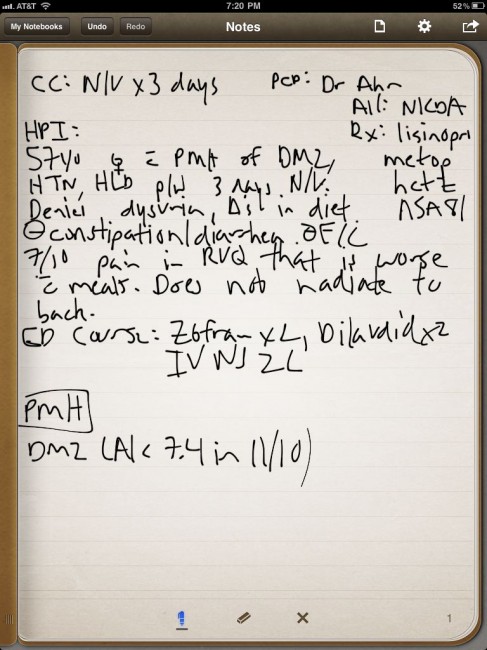 – Stylus/finger too thick for screen

The “Zoom Approach”: The Redemption of Blunt-Tipped Styluses

The Zoom Mode is a feature that allows the user to write in a zoomed-in box that then shrinks down the text, leading to the overall result of something much more similar to the fine tip of a pen. To better understand this concept, it’s like shrinking down the writing of a sharpie on a posterboard to the size of a pen on a lined piece of paper. Since you are writing in a “zoomed area”, even though you are writing with a blunt-tipped stylus or finger, the output will still be as fine as a pen.

This app was the only one that was developed by an individual seller, but provides the best overall performance. As you can see in the image, it very closely re-created the original sample. The writing experience was extremely pleasant and simple. You press and hold down in an area to bring up the Zoom Box. If you don’t want to use the Zoom Mode, you can pinch to zoom in and out and just write directly on the screen. As you can see, the final product of this app is nearly identical to the original sample.

The Zoom Mode was very well-implemented: in the zoom box, when you are nearing the right edge of the box, the left portion of the box shows a preview of where your writing will go next, so you can just continue writing at the left side of the box without having to constantly move around the zoom box. (refer to below picture) 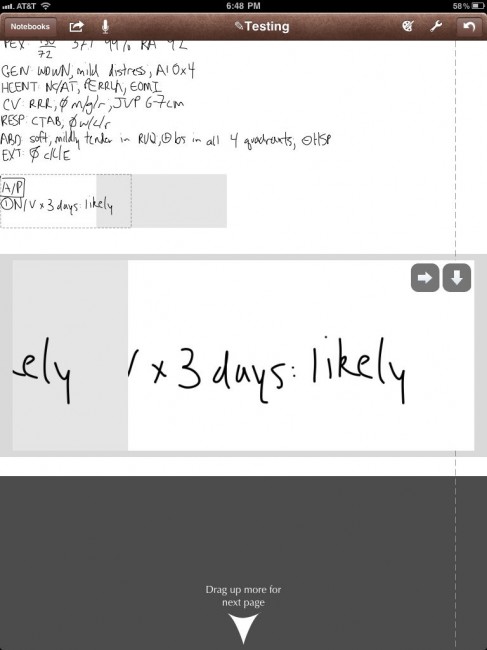 In regards to the feature set, the app provides intelligent stroke recognition that instantly creates linear shapes from your hand-drawn shapes. It also allows you to select groups of text by circling them, which allows you to then then delete or move the text. Try doing that with a pen and paper! Also, it offers the ability to record audio. Notes Plus also syncs smoothly with Google Docs, but it does lack DropBox support, which would have been very nice.

In addition to the lack of DropBox support, several other issues could be improved upon. For one, the undo stroke button was located at the top of the screen and it would have been nice to have one closer to the box where you do the bulk of the writing. Also, when writing in a column near the right edge of the page (ex. The list of medications), the app’s logic kept wanting to advance the writing to the next line. This would be nice in most instances as it allows you to easily start writing on the left margin on the next line, but just doesn’t make sense if you are TRYING to stay on the right margin to create a list.

Overall though, this app is the standout performer of the entire group. 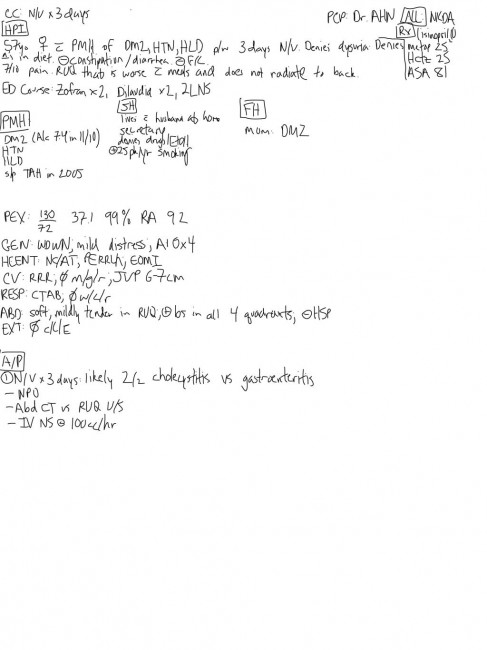