At the beginning of the iPad 2 event yesterday, Apple played a video that showed the various ways the iPad had been utilized in 2010 –  from the classroom to sales teams.  The video also spent time featuring how the iPad has been used in medicine.

Dr. John Halamka, Chief Information Officer of Beth Israel Deaconess Medical Center, who we have mentioned numerous times in the past, was featured in the “2010, the year of the iPad” video.  He talked about how the iPad is being used in the physician workflow, and how physicians are able to spend more time with patients because of the iPad.

You can see the full presentation on Apple’s website here, the medical portion begins about at 12 minutes.

Apple’s video showed physicians interacting with their iPads in a few different manners:

But the ultimate quote of the Apple video, by Dr. Halamka, who truly is  one of the unique innovators in not only medicine but technology as a whole (we encourage you to read his blog):

The iPad will change the way doctors practice medicine

This bold statement, and Apple featuring the iPad in medicine, could be signs Apple is going to take the mobile healthcare field more seriously. At the very least, it shows Apple is aware of the significant impact the iPad is having on medicine, and the potential it holds.

Steve Jobs himself said during the keynote speech, when referencing the plethora of apps available for the iPad:

…a lot of apps for business, and vertical markets, like medical 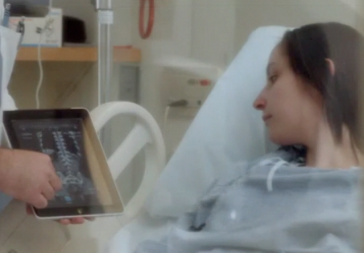 Other key uses shown in the video — How the iPad has changed the lives for kids with autism. This is something we have featured multiple times before, and it was nice to see Apple acknowledge the developers who have created transformational apps enabling children with autism to communicate better.