Last week, Amazon’s Android App Store went online. It may turn out to be a significant development for the Android app economy — especially for developers of medical apps made for Android phones and tablets.

At its launch, the Amazon Appstore will have less than 5,000 apps, a fraction of Google’s Android Marketplace. In fact, currently the major iOS and Android medical apps (Epocrates, Medscape, etc) are not yet available in the Amazon store. But this will no doubt grow over time. The pricing model is also slightly different from Google’s Android Marketplace, with Amazon paying developers 70% of the sale price of the app or 20% of the list price, whichever is greater, to allow for promotional pricing.

Almost at the same time that Amazon was announcing the launching of their app store, Google announced  they were delaying release of the source code for Android 3.0 Honeycomb, the version optimized to run on tablets.

The unmistakable e-commerce prowess of Amazon now driving its own Android app store has added fuel to the speculation that Amazon is planning its own Android tablet to replace the Kindle. Could Google be trying to reassert control over its own ecosystem by holding back the source code to Honeycomb ? While many were disappointed by this seeming reversal on an “open” platform, Andy Rubin, head of Google’s Android group, said the reason for the delay was simply related to the rush to ship the tablet version,  saying “Android is an open-source project … We have not changed our strategy.”

The entry of Amazon into the Android app market makes sense – they are masters at distributing digital content – think of the Kindle and eBooks.  So why get into the mobile app space now? 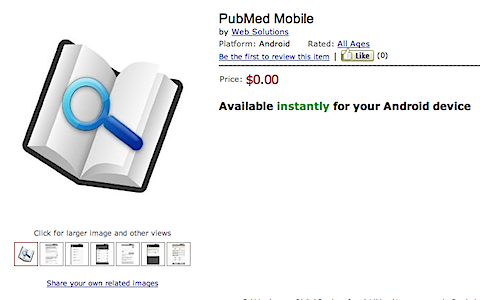 The market for mobile apps is booming.  Apple’s App Store alone generated an estimated $2.86 billion last year. Amazon will no doubt want a piece of that.  In addition, Amazon will want to cement its position as the place to “find everything”.  Lastly, and perhaps most importantly, Amazon can now learn the buying behavior of millions of mobile Android app customers –  data that can be used to benefit the rest of their online store.

Currently, the medical section of the Amazon Appstore shows a paltry 45 apps, and even those are relegated to a subsection of the Health and Fitness category. However, the experience of shopping online, using the familiar and well designed Amazon user interface, was pleasant. In order to use the Amazon Android Store, you must first download the Amazon App Store application to your device. However, once that is done, you can purchase any app on line and quickly send it to your device by simply entering your email address (right). 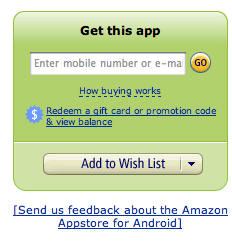 Steve Jobs said at the iPad 2 launch on March 2nd that the iTunes App Store now has over 200m customers with credit cards, possibly the largest collection on the internet. But, in the next sentence he added, “Now Amazon doesn’t publish their numbers”.  It may well be that Amazon is the only other company that can match that number.

Furthermore, people are already in the habit of shopping on Amazon, while most associate Google with “free”. Many medical app developers have held out on developing on the Android platform because of lower revenues compared to the iOS platform.  With its highly refined recommendation engine driving app sales, Amazon could well change this and become a major competitor to the ITunes App Store.

Still, the tight integration between iTunes and iOS is still a major advantage for Apple when compared, for example, to the somewhat awkward experience of uploading and playing music on a smartphone using the recently announced Amazon’s Music CloudPlayer. Furthermore, while Amazon clearly has been building out its Amazon Web Services, Apple may be making some important moves into the cloud itself this Fall with iOS 5, if rumors are to be believed.

If Amazon is able to leverage millions of their customers properly and solve the very real issue of app discovery, the Amazon Appstore could be the best thing to have happened to the Android ecosystem.