The gold standard for detecting cancer cells in biopsies is immunohisochemistry — and detecting key antigens can be a time intensive process, requiring days to complete. Researchers at Harvard and MIT have developed a mobile mini NMR (nuclear magnetic resonance) device operated by a smart phone that can be used at a patient’s bedside to detect cancer cells in under one hour.

Researchers state the parts to make the device cost $200 to manufacture, making it affordable for clinics or in poorer countries.  More promising, however, are the results of a study just published in the Journal Science Translational Magazine that used the device to diagnose cancer.  The study found the mobile device performed better than traditional methods of detecting cancer cells in biopsies.

In a podcast by the Science Translational Magazine, Dr. Ralph Weissleder of Harvard Medical School, one of the creators of the device, explains how it detects cancer cells:

Maybe I should tell you a little bit about the micro-NMR machine first.  Very similar as a clinical MRI machine, it uses the same physics principles, but it interrogates very tiny objects i.e., specific cells.  It does that by looking at magnetic nanoparticles that are targeted to specific proteins on cancer cells of interest in measuring magnetic properties in those samples.  So, by using differently tagged antibodies we can specifically detect protein signatures on these cells.

The mobile mini NMR device — approximately the size of a home phone (The device is controlled by a smart phone, where results are displayed): 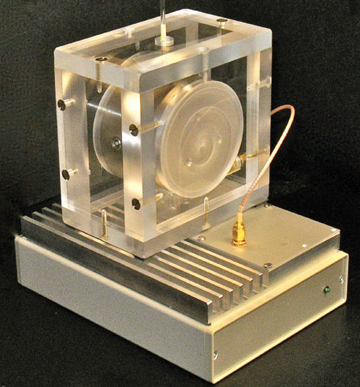 Results of the study:

In the Journal article, titled “Micro-NMR for Rapid Molecular Analysis of Human Tumor Samples”, researchers found the device did extremely well at detecting cancer cells, especially when compared to traditional methods. They enrolled 50 patients who had been referred from an oncology clinic for primary biopsies. These patients presented with suspicion of intra abdominal malignancies. Researchers took fine need aspirates and measured the protein biomarkers in the cells. Core biopsies were also done on patients, but tissue and cells from these biopsy was not used for the Micro NMR device.

The turnaround time for micro NMR was less than 60 minutes, whereas more traditional methods (3 days for cytology, 4 days for surgical pathology) took significantly longer. Conventional cytology on fine needle aspirates was done on 49 out of 50 cases, with an accurate diagnosis 36 out of 49 times — 74%. Traditional histology was done on all the core biopsies — with an accuracy of 84%.  The accuracy with micro NMR was better than conventional methods — a staggering 96% accuracy in the sample cases, with two of the 50 cases being misdiagnosed.

In the Podcast, Dr. Weissleder went on to say his group will be looking at how micro NMR technology could be used to detect infections in bodily fluids, such as TB or pneumonia. This type of rapid diagnosing would be absolutely invaluable in third world countries, where respiratory infections take the lives of millions of people and are one of the highest causes of mortality.

The implications of this device for diagnosing oncologic processes are significant, without even taking the mobility of the device into account, due to the rapid nature of diagnosis the device offers.  One of the toughest things for patients to wait for are biopsy results, and this device showed greater accuracy and instant diagnosis potential — offering the promise of alleviating anxiety, possibly starting cancer treatment sooner,  and a more accurate diagnosis.

As with all new devices, excitement should be tempered until further studies are performed with significantly larger sample sizes.