The word cancer comes from the greek word for crab “karkinos”, so named by Hippocrates who visualized the tumor and its surrounding vessels looking like a crab, dug stubbornly into the sand with its legs. We know far more about cancer today than the ancient Greeks but the vision of an entrenched opponent, almost impossible to extract whole, appears to be vividly prescient.

What we have realized over the last half century is that removal of the visible tumor is not enough. Even as we learned how to do bigger and more destructive surgeries, the cancer still managed to sneak back in, growing later at different locations. The crab’s legs are still embedded in the patient.

Thus the discovery that certain chemicals could extinguish these rogue cells opened the modern era of cancer therapy and led to the first “cures” from cancer. Many of these compounds were exquisitely toxic. Early experimenters even used nitrogen mustard, quite literally a poison, as Siddhartha Mukherjee recalls in his excellent history of cancer, The Emperor of All Maladies.

To many, the battle looked grim. For the founder of CollabRx, who himself was living in the shadow of advanced melanoma, this was the signal to take his expertise in internet information technologies and apply it to cancer. Thus a “biomedical software company” was founded, with the mission

… to save lives by using information technology to personalize cancer treatments and accelerate research. 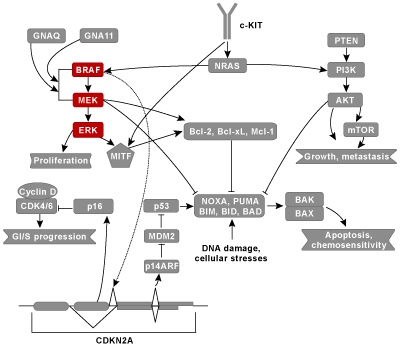 The rapid proliferation of knowledge about the molecular underpinnings of different cancers has brought hope for a new age of “targeted” therapies. These drugs are designed to find and destroy cells with aberrant biochemical pathways, while bypassing the normal body tissues. Immense hopes rest on them.

However, if managing the terrible toxicities of traditional “cytotoxic” chemotherapy is the special skill of today’s oncologist, the future holds new complexities for the chemotherapist. This will be to concoct the best match between the pattern of genetic mutations in a particular tumor with the available targeted therapies.

Today, the number of clinically relevant mutations that are known and the number of FDA approved medications is not large. However, the rapid pace of discovery will likely render this early period short. This is already becoming the case with melanoma, where up to four molecular therapies are in various stages of FDA approval, and at least three different mutations are targets. 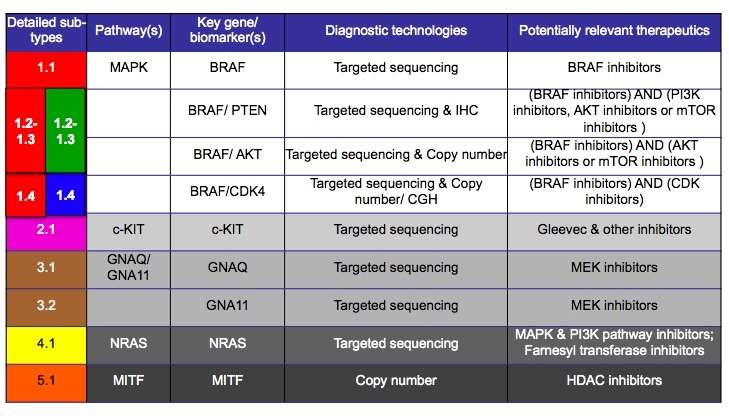 For melanoma, CollabRx now provides a simple a web application to make this match at http://therapy.collabrx.com. The user enters the types of mutations found in the tumor plus some other information, and the application generates a suggested therapy. Again, at this time, the number of potential combinations is not large. However, the model is novel and suggests a different future in a few respects.

First, the treatment recommendation is specific to that individual. This is not population based data meant to serve as a clinical guideline. In fact, by also creating a non-profit wiki “cancer commons”, the company hopes to grow the edifice of actionable information faster than the current method of single peer-reviewed journal article at a time.

Second, the company designed the crowd-sourced “molecular disease model (MDM)” as a structured or “semantic” document. The hope is that MDMs for other diseases will be created in the future and, using what they term “computational knowledge representation”, they can build similar applications for other diseases.

Last and fundamental, the same application is available to both physicians and patients. If great hopes rest on the ability of information sciences to support decision making by physicians, there is no reason the same cannot hold true for patients. Opening avenues of inquiry to the vast number of highly motivated patients can only accelerate the pace of advance.

It is also interesting that the company was founded by Dr. Jay (Marty) Tenenbaum who was living in the shadow of his own battle of advanced melanoma. He was Stanford PhD who was ahead of his time in anticipating the potential for the internet for commerce. His company Commerce One was hugely successful and he used some of his fortune to start CollabRx. Some readers may remember that he was also instrumental in the creation of the Health Apps Accelerator, a framework for connecting clinical web “apps”.

While the CollabRx on-line therapy tool is not strictly a mobile medical app at this time, according to Jeffrey Shrager, CTO, it is likely that “[CollabRx] will soon be distributing them through mobile and/or embedded model”. By bringing the benefits directly to individual, this tool echoes of the way mobile devices have empowered physicians and patients alike. Beyond that, it suggests how information technologies and clinical medicine may be combined in the future to create more powerful tools.