Blackberry Playbook being prepped for hospitals and mobile medical peripherals

Not too long ago iMedicalApps was the first to break the news of Blackberry showing off a medical app in their first live event for their Playbook tablet.  It appears major players in the enterprise software business are banking on the Playbook being used in the hospital setting.

The following picture on QNX’s blog of the software design in action also reveals telemedicine usage: 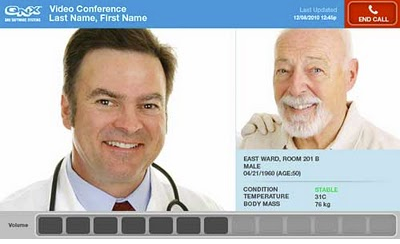 Highlights from the company’s press release:

The reference design supports the Bluetooth® Health Device Profile, a short-range wireless technology well-suited for medical applications in which data is relayed from the local device, such as a pulse oximeter, to a mobile phone or PC for in-hospital communications. The reference design also supports remote device connectivity with a BlackBerry® PlayBook™ tablet.

Apple has proven in the past to not be vested in the enterprise ecosystem as much as Blackberry (although this is changing), and with Blackberry’s solid reputation for security and enterprise usage, the Playbook is primed to be a tablet to be reckoned with in the hospital setting.

From all the great hardware specs and the OS demos we’ve seen so far, the Blackberry Playbook definitely looks enticing — but time will tell if Blackberry is able to follow through on the potential, something they have not done in regards to their smartphone operating systems.

The company showed of the design at Medical Design & Manufacturing West on February 8th.