For those who are not familiar with the the Health 2.0 Accelerator, it is one of a few organizations dedicated to shaping the future world of interconnected healthcare “apps”. The promulgation of the carefully crafted Meaningful Use criteria has standardized a minimum set of requirements for EHRs in order for physicians and hospitals to qualify for federal incentive payments. With these incentives being substantial, the rate of physician EHR adoption has been climbing, recently passing the 50% mark.

However there is little organized push to integrate health IT for consumers looking to learn more about their health, their medications and to help them communicate with their physicians & other providers. The Health 2.0 movement was founded with this glaring inadequacy in mind. It was defined by Ted Eytan in this way

Health 2.0 is participatory healthcare. Enabled by information, software, and community that we collect or create, we the patients can be effective partners in our own healthcare, and we the people can participate in reshaping the health system itself.

We recently wrote about the Health 2.0 Accelerator (H2A), describing it as “laying the foundation for interconnected medical apps of the future”. In this interview, we talk to Erick Von Scheber, one of the founding members of the Accelerator. He is also co-founder of SURVEYOR Health, a service that analyzes patients’ medications and makes sophisticated predictions of the likelihood of drug interactions and their potential presenting symptoms.

The Health 2.0 Accelerator was founded with the following principles:

The non-profit and vendor neutral nature of H2A has attracted a broad spectrum of industry participation. 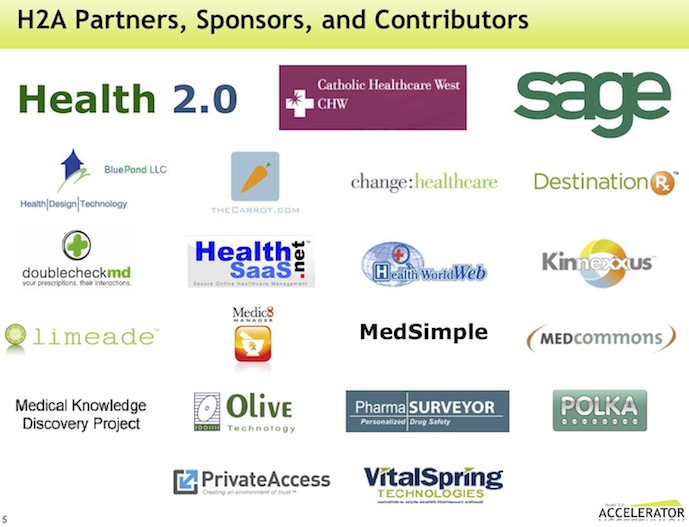 The strategy of the Accelerator is to provide a “light-weight open framework”, not comprehensive standards. As with the best of multi-lateral organizations, the members are all individually motivated to participate in solutions that could potentially benefit their businesses. What has emerged over time is that H2A may end up serving providers and EHRs as much as consumers.

How was the the Health 2.0 Accelerator started ?

It was at the very first Health 2.0 conference, in September 2007 in San Francisco. At that time, it was a one day conference. Right after Esther Dyson, Marty Tennenbaum spoke. If you don’t know him, he is literally the godfather of ecommerce. He launched a company named Commerce One which did the first transaction on the ARPANET.He made out well before bubble burst in 2000 and in 2003/4 became interested in health care. He learned from his own experience that healthcare had a far way to go, and that it would do well to adopt ecommerce technologies.

At that conference, he said “if the people in this room do absolutely nothing, in 10-20 years health care will adopt technologies from the web”. Then he paused and added “but there are a lot of people that don’t have that long to wait.” He encouraged the founding of a non-profit to accelerate this of web technologies in health, which became the Health 2.0 Accelerator.

How did you get involved in the Accelerator ?

After the Fall meeting, there was a Spring meeting six months later, in San Diego. The first morning, Marty put together a group to informally discuss this idea. He had about 100 people from different companies (this is now formalized into the lunch time “unconference”). Marty did not take no for an answer, he went around and picked people to join the project. He chose us and Destination Rx, who are Medicare D administrators for CMS.

How did the Accelerator evolve after that ?

In 2008, at the Health 2.0 Conference, we showed an example of how two web apps can integrate. By the Spring 2009 meeting, the Accelerator had came together, became integrated, got a director and budget. We signed up more members, including Kaiser, First DataBank and Catholic Healthcare West. Others came. We created an annual code-a-thon.

For this Fall, we wanted to choose fewer companies. We wanted to show how it would benefit patient, care-giver & provider. That’s why we built a scenario about a patient, her daughter and her doctors.

How is the Accelerator related to the Health 2.0 Conference ?

We are part of the H2.0 family. It also includes H2.0 advisors, the conference, the Accelerator and the Developer Challenges.

How do you compare the Accelerator with the NHIN Direct ?

[note: The Direct Project is a federally supported project, with the goal of specifying “a simple, secure, scalable, standards-based way for participants to send encrypted health information directly to known, trusted recipients over the Internet.”]

I keep learning about this. In ecommerce, when Marty co-founded Commerce One, they had to develop their own standards. At that time, XML was brand new. He said, in order to get companies to work together beneficially, certain companies will emerge which will take on the task of building the infrastructure. This is in contrast to one organization building the infrastructure.

Thus he was pushing the Accelerator network as a place where companies can come together. The strategy is not to build new standards. We already support SNOMED, NDC, HL7. We learned how to work around the problems that will inevitabily arise. We did not want to scale up to a standards organization like IEEE, WC3 [World Wide Web Consortium].

What keeps companies in the Accelerator ?

Initially, when ad rates for consumers health web sites were high, we considered that we could share traffic and ad revenue. We are now in the process of reinventing the Accelerator for the larger community that inextricably involves the patient, caregiver, provider and payer. We came out of the consumer focus since we were born in the health 2.0 community. Because of the shift with Meaningful Use, etc, we are taking more interest in the providers and plans.

We at SURVEYOR Health have noticed a swing in the industry in terms of adoption in HIT. Many of the big indigenous players, such as GE, Eclipsys, Epics are losing market share. New “upstarts”, with web savvy are growing. Will large hospitals wait for 3 years for the next generation of Centricity when lighter weight players are evolving more quickly ? We see a huge rate of change from our perspective.