Phrase Board is a free iPad app designed for patients with speaking difficulties. The app (iTunes link) itself is very simple and to the point. It essentially consists of a number of buttons that users can press to convey the message they want. “Yes” and “No” buttons are large, given the frequency of their usage.

Other messages including common complaints such as pain are easy to convey by pushing a few buttons to indicate the type, region and frequency of pain. A handy diagram also appears to allow users to point to the specific region of the body that the pain affects. This would be especially useful if the user has motor difficulties and is unable to point to tricky locations, say the lumbosacral region of the back.

Given that there are a significant number of patients with speaking and/or motor difficulties or may be intubated and cannot talk, many patients stand to benefit from Phrase Board. 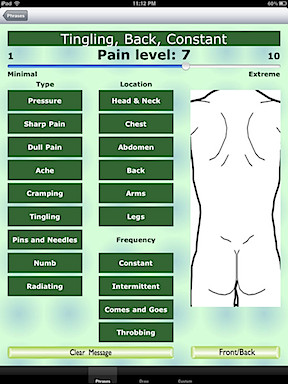 Another useful function is the ability for the user to add custom, frequently used messages. This certainly does expand the range of the app, and allows users to better incorporate it into their daily lives. 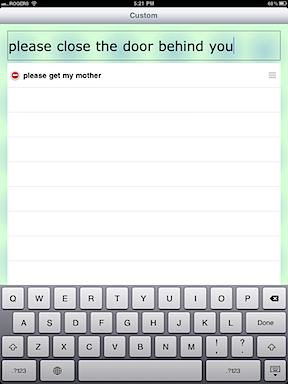 The last function is a freeform drawing/writing function. This adds the ability to create personalized messages or pictures, and enables users to email creations to family and friends. 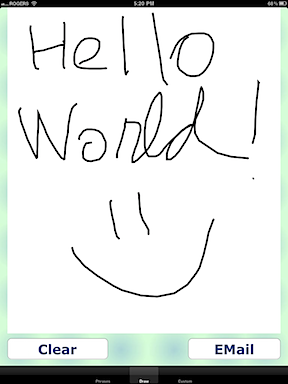 Phrase Board is a very simple app (all of the functions are basically covered in this short review) for a specific group of people. For those who have speaking difficulties but retain good motor function, navigating the app will definitely be a breeze.

Having worked with patients with physical disabilities in the past, however, I am aware that there are many for whom the app may be difficult to navigate. Those with less muscle control may find it difficult to accurately press the desired buttons, as slight touches are enough to trigger the iPad’s capacitive touchscreen. Thus it may take several tries for some users to select their desired message.

There is also what I would consider an important omission in that there is no option for the app to read out (i.e. voice synthesize) the entered messages; as it stands, the app merely displays the selected message, necessitating those involved in the conversation to look at the screen in order to get the message. It would not be possible for example, for a patient to get the attention of a nearby nurse with a loud audio message delivered from the app.

I would also have liked the selected message to appear more prominently than it does at the moment. Since there is no audio, other people must look at the screen to see the message, and if people do not know the user is trying to communicate via the app, they will definitely need a few moments to figure out what is happening, and where on the screen to find the message.

Overall, Phrase Board is a nice simple app that certain users with speaking difficulty may find useful. Patients are a diverse group of people, and the app will definitely not be a perfect fit for everyone. But since it is a free app (and other medical equipment may be very expensive), I would encourage potential users to give it a try to see for themselves if it is something they would use in their daily lives.

Phrase Board is a straightforward app to help users with speaking difficulties convey short messages, though it may not be good for users with less motor control.