Need an ultrasound but not near a hospital? There’s an “app” for that

Imagine walking into the room of a patient with ascites and pulling out your iPad (which you were just using to put in orders on another patient), pulling an ultrasound probe out of your pocket, connecting the two, and finding a fluid pocket from which to drain the abdominal fluid.

We’ve already shown how iPad’s can be useful in the OR. Now they, along with other tablets and smartphones, can be applied to bedside diagnostics and therapeutics to enhance patient safety while reducing costs. It’s a pretty exciting prospect being put forth by an mHealth startup called Mobisante. And having won awards at an MIT Enterprise Forum as well as the Mobile Health Expo, others certainly seem to buying in as well.

Mobisante, an mHealth company based in Redmond, WA, has recently been showing a 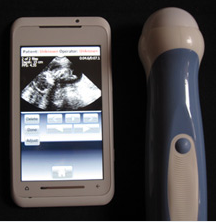 new smartphone peripheral at conferences across the country – an ultrasound probe. According to the MIT Technology Review, the current prototype connects to a Toshiba TG01 smartphone, was originally developed as a laptop peripheral by David Zar, a computer engineer at Washington University in St. Louis.

With a few tweaks and some development funding from Microsoft, he was developed a smartphone peripheral prototype. Now working with Sailesh Chutani, veteran of Microsoft’s Windows Mobile division, Mobisante is piloting its prototype with a small group of physicians and seeking FDA device approval.

It is not clear yet what the device has in terms of depth of penetration, resolution, and so on. It does lack color doppler. However, sample images on the Mobisante site suggest that it is capable of visualizing some fairly deep structures like the abdominal aorta. And the quality of the images posted on their website is pretty good – allowing for some fair visualizaton of the echotexture of the kidney for example.

However, even if it doesn’t provide some of the high-end features of more advanced ultrasound platforms – like 3-d rendering of a fetus’ face or pressure-gradient measurement – it definitely has the opportunity to fill a critical need. For example, it would certainly be adequate to look for hydronephrosis, to do a FAST exam in a trauma patient, or to identify a fluid pocket to perform a paracentesis. And it would do so at a fraction of the cost of the more advanced platforms – Mobisante claims that its devices would bring the cost of an ultrasound exam to under $1.