[We are reporting this week from the mHealth Summit in Washington DC – a conference covering the integration of mobile technologies with medical research, information, diagnosis, treatment, and care.]

While much excitement is evident during this week’s mHealth Summit, much of what has actually been demonstrated thus far is small pilot projects either in the US or in developing countries. Few projects involving mobile devices have gained traction to the extent of affecting large, national populations. In contrast, the use of mobile phones for banking has already taken off and is already resulting in profound changes in a few developing countries. The poster child for mobile financial services (MFS), also sometimes called branchless banking (BB) is the mPesa service of Kenya’s biggest mobile provider SafariCom.

In the few short years since its introduction in 2007, mPesa has already enrolled 13 million subscribers in this Eastern African country of 39 million. This extraordinary rate of adoption is no doubt due to the fact that, for the poor, managing money  is a major challenge. Having a simple, trusted way to send money between individuals is thus incredibly valuable, whether sending money to relatives in the village or even to pay for services.

A compelling presentation on mPesa and more broadly on branchless banking was given today by Mark Pickens of CGAP , a non-profit dedicated to advancing financial access to the world’s poor, funded in part by the Gates foundation. He gave a wide ranging introduction to what he called “Mobile Money 101”. Much of the presentation was based on his previous research. He started by describing the problem the world’s poor face in managing their finances. While their income is limited, it is also very volatile. Income may come episodically, such as with harvest, while expenses may come at planting or unexpectedly. Therefore, even for 80% of the world’s poor who live on less than $5 day average, studies using financial diaries show that the poor are active money managers. They use an average of 8 different financial instruments to manage money and their average flows money are over $1000 per year. 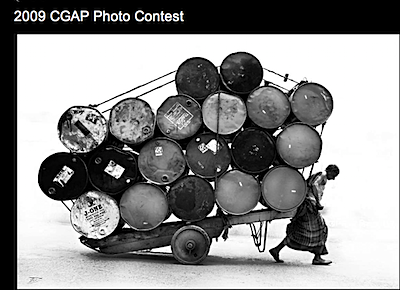 However, many of these financial instruments, which may range from a family relative transporting cash or a local money lender, are notoriously inefficient, expensive, or even theft ridden. One study in Uganda showed that 87% of people had lost money over the preceding year as a result of these inefficiencies or due to theft. Sending money between countries is very expensive, for example, sending remittances from Mozambique  to its neighbor South Africa can cost up to 14% of the total sum, a huge burden. At the same time, traditional financial services, i.e. banks, are woefully underrepresented in rural and poor areas, leaving the poor with no option but to use these expensive alternatives.

In comparison to the paucity of banks and ATMs, merchants that sell cards for air time for mobile phone are ubiquitous, even in the most rural areas of less developed countries. In Kenya, for example, there there are more than 100,000 air time merchants while there are less than 2,000 banking facilities. Globally, 1 billion people have a mobile phone but no a bank account.

As stated above, the success of mPesa has been stunning. Almost one-half of adults in Kenya are subscribers to the service. In terms of cash flows, mPesa is moving $422 million per month, which is already more than the Western Union’s global transfers! SafariCom is now extending the system from a purely transaction instrument into a savings vehicle, called mKesho. In this case, a depositor hands money over to an airtime merchant and gets confirmation of the deposit via SMS. Again, a financial institution is the third party in this transaction.

Yet, even with this great early success of mPesa, not all countries have duplicated its success. In fact, across 46 implementations in Africa and Asia, only 7 have more than 100,000 customers. Since the margins with each transaction are so low, financial viability of the system will depend on massive scale.

He suggested that the stimulus for future growth will come from more services, such as savings and insurance or from parallel technologies, such as mHealth or mAgriculture. Mr. Pickens even suggested that many aspects of mHealth may not take root until a viable payment system is instituted, and thus the viability of mHealth may also depend on the presence of mFinance. He hoped that more entrepreneurs will enter the space in the future to create new, innovative products that bring more financial instruments to the world’s poor in the future and allow them to be more productive.