Review of Nimble: Possibly the first true high-powered EMR running on an iPad

[Editors note: Be sure to check tomorrow for our interview with ClearPractice co-founder Dr. Tom Doerr and president Joel Anderson]

Lately, it seems almost anything medical regarding Apple’s iPad generates immediate interest. Nimble, the new iPad electronic health record (EHR) by Clear Practice, has been no exception. In the few short weeks since its release, this application has rapidly generated interest across medical blogs, mainstream press and, most importantly, from doctors themselves.

Most prominently, the coverage included a lengthy piece last month in the New York Times, which apparently resulted in a dramatic spike of physician interest. Other coverage has included prominent medical bloggers (here, and here) and other press coverage, listed here.

One reason why the heightened interest in Nimble may be justified is that the application, although written natively for the iPad operating system, is actually the front end for a mature and feature complete web-based EHR named ClearPractice that has been in use for more than a decade. As such, it already includes features such as practice management, e-prescribing, patient portal, and coding and billing that doctors expect from an EHR. In addition, ClearPractice and thus Nimble includes a rich body of patient education material and physician oriented evidence based information on diseases. It is the ready availability of these comprehensive features in a truly mobile device that might justify the description of the iPad, in co-founder Dr. Doerr’s words, as potentially “transformational in healthcare”.

The first notable innovation of Nimble precedes its first use, namely it allows a physician to download and explore a fully-functional trial EHR from the App store. This might seems trivial in the world of non-medical software, but the current reality is that a doctor who wants to check out an EHR will generally have to schedule a visit or at least a web demo with a sales representative in order to have the features explained to them. Having seen the lost look on many physicians’ faces as they are taken through such vendor demonstrations, this simplicity alone may catalyze Nimble’s future success. 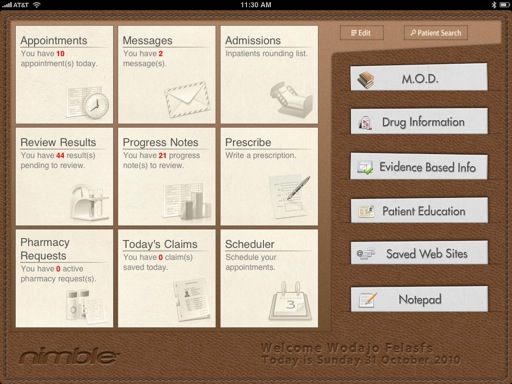 Once the user is logged in, the home page of Nimble is very clearly laid out as a grid of large tiles. As can be seen in the video demo below, the user can rearrange these tiles to suit their work flow. Where appropriate, the tiles are badged with the number of items requiring attention, such as “44” laboratories to review or “12” messages. A persistent button in the top left of the screen produces a pop-over menu with navigation quick links. 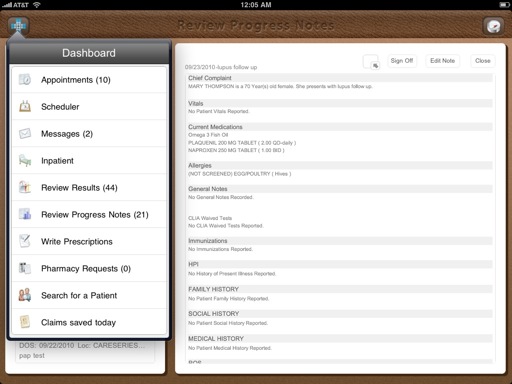 In the design of the application, the developers have been disciplined in utilizing the native user interface (UI) elements of the iPad. As will be discussed in the interview, the folks at Apple actually helped in refining the user interface and the attention to detail – this clearly shows in the released product. This also means that navigating inside an otherwise sprawling application is actually very intuitive and quickly familiar to any iPad user.

Once inside a patient’s chart, a separate pop-over menu offers context-dependent links to relevant portions of the patient’s chart, depending on the current open document. As with other EHRs, entry of the patient’s history or exam is driven by templates. A large number of templates are available and physicians can, of course, customize them to their needs. Drilling down to select items within templates is done via cascading columns, which are fairly easy to navigate using the touch interface. The narrative text is displayed below as it is assembled from the various selections. Voice memos can also be directly added in many fields. 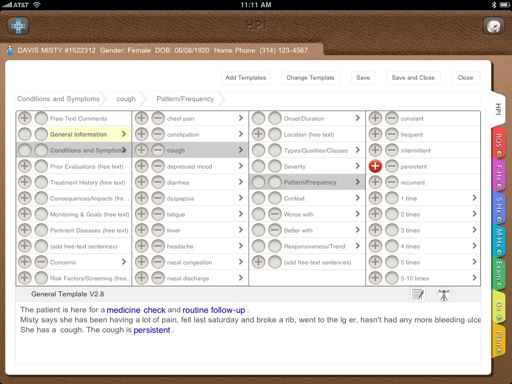 Images can also be used to enhance the physical exam or history, based on medical illustrations to which the physician can add arrows and text. While this is a very promising feature, it is currently implemented a bit awkwardly. The stock images are too detailed to allow simple annotation and entering text is more difficult than necessary. 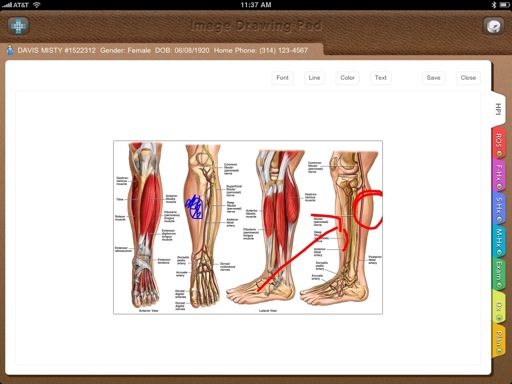 Other minor issues include the presence of two context sensitive menus which can be a bit confusing. There is one on the top right for navigation and second one on the upper left inside the chart. Since there is a persistent quick navigation link on the top left, is the top right button necessary? Also, requiring the user to log-in every time is disruptive, especially without iOS 4.2 multitasking. Perhaps a standard 4 digit screen lock for short durations away, say five minutes, would be adequate security.