The explosion of smart phones, originally led by the iPhone 2007, has catalyzed the explosion of mobile medical apps which our readers are surely familiar with. But, along with the proliferation of medical reference apps and interfaces to electronic health records (EHRs), there is a much broader world of mobile medical devices and simpler phone interfaces collectively termed mHealth, which is an area of intense interest for governments, industry and care providers.

This year, this interest has been punctuated by nearly half a dozen different mobile health meetings – many that iMedicalApps has attended and participated in. Perhaps, the largest one of all is now in session in the Washington Convention Center, sponsored in part by the Foundation at National Institutes of Health (FNIH) – an event we are currently attending. This type of sponsorship is an indication of the importance mobile health or mHealth is now reaching. To further accentuate this, the keynote speaker to launch the event was Dr. Francis Collins, the director of the NIH himself.

In a rapidly moving talk, he emphasized that the NIH is taking this field very seriously and demonstrated a graph of the number of annual award in the mHealth space rising rapidly to a high of 150 awards in 2010. This summer, there will be a Summer Institute for 25 investigators for who will spend 5 days intensively learning about mHealth in La Jolla, sponsored by the office of Behavioral and Social Science research. He gave out the website and predicted that entry will be competitive. I would guess applicants did not even wait for his keynote to end before they started applying.

He also went on to give a few cogent examples of the reach of mHealth and activities in which the NIH is involved. The first was a multilingual mobile web enabled interface to the National Library of Medicine (NLM) archives. He noted that the NLM is a prime mover in getting validated and adequate medical information in front of the public. With this web access, available in English & Spanish, and platform independent, users can access information on drugs, medical news, medical dictionary, as well as use the search engine. 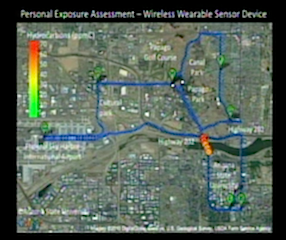 He then showed a collaborative research example where environmental exposures are hoped to be mapped to genetic changes. In this example, real time sampling of hydrocarbon vapors and carbon monoxide was performed by wearable devices connected to mobile phones. These were deployed throughout the Phoenix area and a real time map of these pollutants was collected. On the screen, we could see a collection of dots rapidly moving around the city and changing from green to yellow to red. The interesting thing was that the distribution of these pollutants was not at all even – yet the average pollution reported that same day was in the low range. The same technology was used in Gulf of Mexico after the Deep Water oil spill, being placed on shrimp boats to map hydrocarbon vapors. 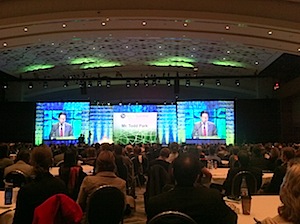 Todd Park, Chief Technology Officer of the department of Health and Humans Services then followed and gave a rapid fire summary of his vision for the government’s role in promoting health via mobile devices. The first example he gave was the tremendously successful Text4Babies program. This was launched in cooperation with the National Healthy Mothers coalition. In this program, pregnant mothers simply text “baby” (or “bebe” if Spanish speaking) to 51141 and then receive up to 3 free SMS messages weekly, timed by thier due date, covering nutrition, breast feeding and other resources to help improve birth outcomes. It is now the largest free mobile health program in US , having enrolled more than 110k mothers.  He underscored how it’s just getting started. The HHS has created a “text for babies task force” to adapt this approach to others health problems such as smoking and childhood obesity.

The goal, in Mr. Park’s mind, is for the HHS and the government in general to liberate health data (his slogan is “data liberacion”!) and let the innovators of the world turn it into new ideas and applications. The model is the National Oceanic and Atmospheric Administration (NOAA), a governmental agency which freely disperses weather information. On the weather.com platform, the Weather channel and hundreds of other resources have been built. He wants to build the NOAA of health to catalyze an ecosystem of innovators, to help both providers and patients. He states that shared community data on smoking, healthy foods, and smoking have already led to a “stunning” range of apps.

Finally, he quoted the “Blue Button” program already in progress at the Veterans Administration (VA). This rapidly spreading concept simply places a blue button on a web page which allows the qualified user to download his or her health records. It is already being adopted by other agencies and even some commercial payors. At the VA, he says more than 100k users have already used the Blue Button.

In conclusion, he argued that new incentives and free data will lead to continually improving health systems, and one in which mHealth will play a pivotal role.  He left the energized audience with his farewell “may the force be with you all!”

Stay tuned to iMedicalApps frequently this week – we’re at the mHealth Summit and will be providing analysis throughout the week from key players and introducing new mobile health technologies.