What the iPad’s most significant operating system update [iOS 4.2] means for healthcare and medical professionals

Sometime in November, Apple will be releasing a new free software update, termed iOS 4.2, that introduces quite a few notable improvements and changes for the iPhone, iPod Touch, and most dramatically, the iPad. This update is especially significant for iPad users because it marks the first meaningful software update since its release in April, and finally brings it on par with the iPhone and iPod Touch in regards to many features – such as multitasking and folders.

We’ve given numerous examples in the past of how the iPad is being used in healthcare and medicine – from all the med students at Stanford and UC-Irvine being given iPads, to a more broad adoption in the health care setting and it’s use in the hospital.

The iPad non withstanding, the update still brings helpful improvements that should make even the iPhone and the iPod Touch more readily equipped for the hospital or clinic. Highlighted below are some of the features that could have an impact on healthcare and how the iPad is used by medical professionals.

New Features for ALL iDevices

This is perhaps the most significant new feature of iOS 4.2 because it introduces the ability for iDevices to print wirelessly, which could dramatically increase their utility in a clinic or hospital setting. For example, one of the key limitations of using an iPad or other iOS device in the clinic setting is it’s difficult to print literature for patients while talking to them about various disease pathologies. The hope with AirPrint is that it will be a seamless and painless solution for printing from mobile devices. 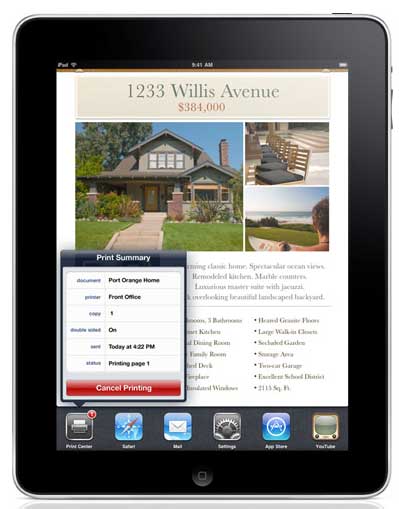 The other new flagship feature of iOS 4.2 is AirPlay.  It has incredibly high potential but will require the most effort in order for it’s full utility to be realized. This feature allows any iDevice to display media (sound, video) to a nearby AirPlay-equipped device. Currently, the primary Airplay-compatible device for video is the AppleTV, but many of the current accessory manufacturers (including JBL, iHome, etc) have Airplay-Compatible speakers. Medical usage for this feature includes being able to do presentations wirelessly from your iPad in the front of a room without a cable connecting yourself to the projector, or sharing videos or sound clips from your personal iDevice to patients or coworkers.

In a hypothetical situation – all your patient rooms would have devices that are Airplay-Compatible and connect to a TV monitor.  You could show a patient a quick educational video with your device without having to hand it over to them, and you could use the same iPhone or iPad to do this in each different room. 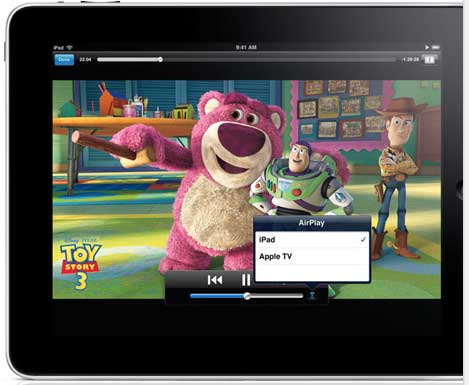 This is not really a “feature,” and it hasn’t been promoted by Apple themsleves, but multiple sources have shown that iOS 4.2 runs more smoothly on older iPhones and iPod Touches. When iOS 4.0 came out for the iPhone 4, many people reported they felt that the new software was not optimized for older iPhones and led to a sub-par experience. The reality is that many health care workers are holding onto older iPhone’s such as the iPhone 3GS and with resource-heavy applications like Epocrates and Medscape, improvements in speed are essential in the health care setting.

This is fairly self-explanatory, but Safari (the Internet Browser) now features a search option to look up certain words in the text of a webpage. (To access this, use the “search” field in Safari and tap “Find on This Page” at the bottom of the list of search engine results.) This will improve the time that it takes to look up information on UpToDate.com or Wikipedia. Especially with the smaller screen size of the iPhone and iPod Touch, it can become a bit tedious scanning through longer articles in search of pertinent information.

When in a room with several other iPhone users, it’s hard to tell when you’ve received a text because most people use the same text message alert tone. Thankfully, iOS 4.2 comes with 17 new sound effects to choose from that vary in lengths, allowing you to better differentiate yourself from the next person.

This new functionality could be essential for academic centers such as Emory, who are implementing pager systems using smart phones.

Another new feature Apple has added is the ability to associate different text tones with different people. For example, you could have one text tone for your significant other, another for friends, and another for unknown – such as the hospital. This might help you “triage” your messages by sound.