[As mentioned in yesterday’s review of Nimble, ClearPractice has been in business long before last month’s release of Nimble, its iPad EMR. In this interview, we learn from Joel Andersen & Dr. Doerr how the founding principles of ClearPractice still drive its current evolution.] 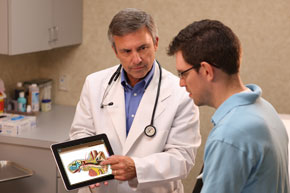 Dr. Doer, please tell us a little about your background, and the start of ClearPractice

I am a practicing internist and in 1996, I had an epiphany while in an exam room, that medicine was an art not a science. I thought there should be some consumer reports for doctors to help them make decision. So, I, wrote a drug reference for myself. This grew to 140 pages by 1998. I recruited a pharmacist to help edit it and started to share it with partners.

When I told this to my brother John, the investor, he told me to write a business plan. I co-founded the company in 1999. We hired more pharmacists and the document eventually became 5000 pages. We indexed it by diagnosis codes in order to help find information faster. Using this guide, in1999 United Healthcare told our group that we were one of top two in the country in terms of cost-effectiveness. This led to the development of our data driven company servicing Medicare Advantage plans.

What were the goals of ClearPractice ?

[TD]
We feel like we’ve been ahead of our time for some years. We feel that EHRs should render decision support and better outcomes. So far, reimbursement has been so focussed on meeting bullet points that the resulting care has not been as focussed on outcomes. The current ARRA incentive may be turning the direction.

We are interested in “point of thought decision support”. I’ll give you an anecdote. Cox-2 inhibitors were studied in a 2000 study named “CLASS” in which the Cox-2 inhibitor, Celebrex, was compared to NSAIDS over a six month period. Eight thousand patients were randomized and it was published in JAMA. However, the cohort actually continued to be followed and by 12 months the benefits had disappeared. Still pharma decided to target subset of patients with GI sensitivities and used direct to consumer advertising and by 2007, Cox-2 inhibitors were 60% of all NSAID prescriptions.

The information [showing no benefit] was actually available on the FDA website. We had it in our prescribing guide. We feel if all docs had ready access to this type of information, it would help them make their own best decisions.

Why do you think adoption of EHRs is still slow smong small physician groups ?

[TD]
There are a lot of reasons for poor adoption. One reality is that EHR systems slow down busy doctors. HITECH only solves the economic problems. But, what value does it bring the doctor ?
[JA]
We know 70-80% of docs practice in groups of 10 or less, and most don’t use an EHR. Complex pricing is an issue, we have straightforward pricing. We have to look at implementation methodology, doctors can’t shut down their practice and do training. The principles for the company include: easy to evaluate, easy to implement, and easy to use. We can’t expect docs to need a consultant to evaluate an EHR. Most EHRs will not even let you see the product. I vowed when I came back to the EMR industry, that docs would know exactly what they’re getting into. Our implementation method is called “RAD” – rapid adoption & deployment. Doctors and staff can perform self training, and can continue to train after installation.

Dr. Doerr, your brother was recently quoted as saying “‘With the right software that is cloud-based, the iPad is going to be transformational in healthcare.” What makes you believe that the iPad could sustain an EHR ?

I think the iPad could be transformational in healthcare due to its usability. For example, I’m in a 70 man group which evaluated EHRs and chose NexGen. I’m leaving the group so I can use Nimble. For me to use NexGen, I have to use Citrix to access it. In fact at home, I have a computer just to dedicated to Citrix. With Nimble, I can log into it in 10 seconds and “talk” my note into it. The advantage of the iPad is portability, usability and navigation. We were forced to rethink the EHR interface. 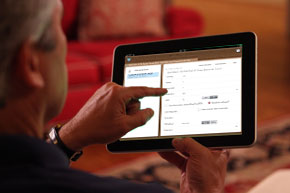 What was the nature of your collaboration with Apple ?

[JA]
We were at a board meeting of a parent company in April when John Doerr said I want ClearPractice to dedicate 3-4 developers to making an iPad app. After that, we went out to Cupertino 3-4 times, that is Tom, Subba [Subbarao Siddabattula, Founder and CTO] and myself.
[TD]
I initially thought the iPad was going to be a toy but John & Suba saw the vision right away. That’s how John is. For example, in 1994 John was quoted saying unconnected computers would be worthless. This was in 1994.

We did the demo for 6-8 Apple execs, but initially they did not seem to be very excited – until they heard the app was actually written in [the iPad’s native programming language] Objective C. Actually, it is now one of the most robust apps for iOS, per Apple. After that demo, they got excited, and they assisted us in UI development. They will do this for other developers also. We had several meetings with the head UI evangelist at Apple. That’s where we made unbelievable breakthroughs in UI simplification. He helped us get it down to 3 buttons, he sliced and diced it not knowing anything about EHRs. What you are seeing now is actually the 4th version. Currently Tyler Stone runs healthcare vertical in Apple, he really knows the EHR industry.

Will we see Nimble in an iPad ad someday ?

[JA]
There are limitations to the App store for enterprise software. It is not always predictable in terms of timing, of when the app will be released. And, the health IT is incredibly proprietary. We were even reluctant to put the software as a free trial until we realized that doctors can try it out themselves. However, we adopted Apple’s methadology of releasing the software at announcement so docs can see it for themselves right away.

Talk about Lumeris a bit

[TD]
Lumeris is actually one of three companies that were initially founded by physicians in five states. The others are ClearPractice and Essence, a Medicare Advantage part D insurance company. Lumeris grew out of our learning from Medicare Advantage.

We believe that payors should be collaborative with physicians, and that they have reciprocal responsibilities. This is detailed in a whitepaper on our website. Lumeris incorporates a rules engine to guide prescriptions and other orders. It is a shared risk contract with the physician group and receive 80% of share-back from the savings. So far, in Medicare Advantage, this is working nicely. Now, other payors are becoming interested in this type of relationship. One of the Blues is a customer.

In November, we are piloting real time communication between payor through Lumeris and ClearPractice. We feel
that the EHR has information that the payor does not have, and we want to accelerate the free flow of information.
Payers will have to be more transparent and there will be more pricing visibility. ClearPractice is well positioned due to its relationships with payers and Lumeris will be in the forefront of this change.

[TD]
Clinical decision support is hard to do well. When suggesting alternative treatments, the burden is on the author to provide every bit of pertinent information. The doctor needs to be able to see all possibilities one click away, a lot of companies have not done that. There is this myth of the all-knowing doctor, that’s why we need a team approach.

What are your plans for the browser based application ?

[JA]
We believe 90% of users will use Nimble alone

How has the initial response been to Nimble ?

[JA]
There was a lot of initial excitement from early iPad adopters and Apple enthusiasts. But after that waned, the excitement stayed with others. We built it in 5 months, but other releases are coming, with exciting new features
[TD]
One of the nice things about the iPad community is that users tend to be more sophisticated, it’s a nice place to be. We set out to have the whole app on the iPad, not just the mobile version. The true value of EHR is when clinical decision support can be used at point of thought.