Despite the costs associated and the uncertain financial rewards for physicians, adoption of electronic health records (EHRs) is on the rise. For many practices, it seems the benefits of cheap information retrieval and the protection against audits outweighs the costs of an EHR.  Plus, the monetary incentives of the HITECH act may just sweeten the pot enough for the those still sitting on the fence.

Many EHR implementations include patient portals and some even include full fledged patient health records (PHRs), yet thus far the extent of patient adoption of PHRs has not been as gratifying. The most successful PHRs thus far are those deployed by care providers, especially large ones like Kaiser and Mayo Clinic, which are tethered to the providers’ EHRs and thus are already pre-populated with a patient’s own records. Kaiser’s PHR, in particular, is a rich portal that is often held out as an example of the potential of PHRs.

But what about a simpler approach? Two iPhone apps, Capzule PHR and Gazelle aim to provide a way for patients to store their own health records, including medical conditions, vaccinations and physician contact information. The approach for both apps is fairly similar with screens organized by information type, options to store and display laboratory data, and options for sharing information.

Both apps have gained a significant amount of press recently, most notably Gazelle – due to the large company that made it.  However, both apps have issues overcoming data silos preventing their full functionality. 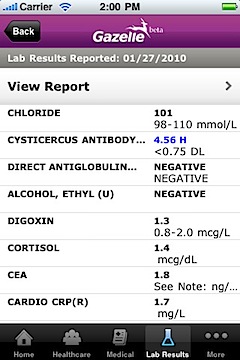 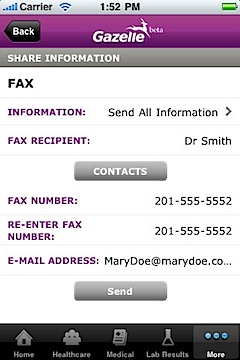 Gazelle was created by Quest, the national laboratory company, and thus integration into Quest’s data is built in. In fact, setting up the application requires creating an account with Quest. Use of the app requires this username and password. The app also allows populating the hospital and physician fields from the phone contacts and gives the user options to hide or display certain categories of information in case of an “emergency”. Gazelle can not only email the stored information, but also has the nice additional feature of being able to fax the data from inside the app, presumably using a remote fax server. 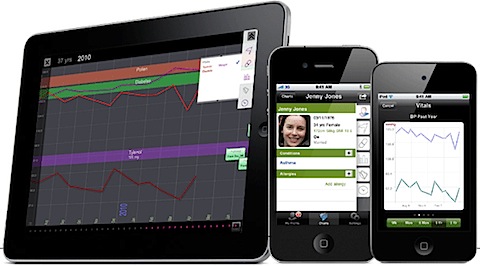 In contrast, Capzule PHR does not seem to place as much stress on layers of privacy but it does allow more than one person to keep information inside the app, which could be helpful for a family. It has a native iPad app and the capacity to edit and back up the data on a desktop computer, connected over local WiFi.  Capzule PHR can also draw attractive plots of laboratory results over time and the app allows for storage of upcoming doctor appointments.

I would imagine that many patients (and we are all patients) dream of going to a new doctor’s office and not having to fill out our medical information from scratch. Alas, neither of these apps helps to bridge this problem in this current world of isolated health data silos. In fact, neither app interfaces with the two competing cloud-based PHRs by Microsoft and Google.

For that matter, it is not even clear that either of these “brand name” PHRs will gain significant traction since patients have yet to demonstrate an appetite for active management of their health data. Characteristically, Google has been emphasizing programming “hooks” (APIs) to encourage a broad range of features by outside developers, while Microsoft is leveraging its deep penetration into the enterprise with more complex, integrated solutions.

Yet, a more decentralized approach such as that envisioned by the Dossia Consortium may be more successful over time. Perhaps, the next generation of mobile PHRs will provide richer interconnection with existing health data. Certainly, if mobile PHRs are going to be the “killer apps” that lead to lifestyle changes, they will have to provide a lot more value for the amount of work required on the part of patients.