Can a smartphone improve CPR? An ER physician’s invention reaches the market

For anybody who has performed CPR during a “code”, it is feels a lot different that one would expect from watching it in on television or compared to doing it on a dummy during in training. For starters, it is always performed during an emergency, with an actual dying patient. Second, it turns out to be quite tiring to perform compressions for an extended period of time while giving rescue breaths. And, distressingly, the rescuer has almost no way of knowing if he or she is doing it at an optimal rate or force.

This was the problem that an app called PocketCPR tried to solve. It launched in the App store in November 2009, by Zoll Corporation. Using the built-in accelerometer in the iPhone to approximate the depth and rate of chest compressions, the app compares them to the recommended guidelines of 4-5 cm deep and 100 compressions/minute and provides feedback to the rescuer. However, the app required the rescuer to hold it in one hand while performing a compressions. This was clearly not practical in real life situations, and could make an already tiring task even more so. 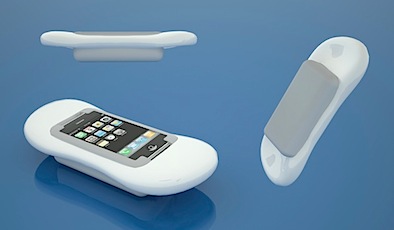 Dr. Ivor Kovic, an ER physician in Croatia who performs CPR on a regular basis, wondered if there is a better way. In a wide ranging at Mobile Monday Amsterdam event called Mobile Health, which took place in Amsterdam last February, Dr. Kovic covered many ways in which smartphones are changing health care technology. The one segment which produced the greatest applause, however, was when he showed his prototype for a two-handed cradle for chest compressions which also serves to contains the iPhone running PocketCPR. This seemingly simple device would simultaneously make the force of the compressions more effective while holding the iPhone in a position where the screen would be visible displaying useful information. 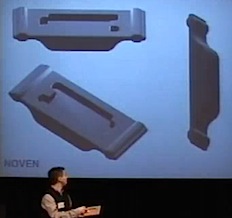 After that conference, the invention was displayed at at several international innovation fairs and conferences, receiving awards as well as quickly garnering media interest (Endadget, The Guardian, MedGadget). Sensing the opportunity, Dr. Kovic went on to launch his own company and is now launching a very smartly designed CPR cradle as well as an accompanying iPhone app (an Android version is coming). Internal cross sectional studies performed on CPR manikins have apparently clearly demonstrated the benefits of using the patent-pending invetion.

According to Dr. Kovic,

The Ivor Medical version of the CPR feedback app is designed based on real life resuscitation experiences, to provide a certified rescuers with quick access to CPR feedback. It features several unique characteristics like the PRO mode of operation intended to be used when the patient’s airway is secured, thus providing both prompts for chest compressions and correct rate of bag ventilations.

The CPR Cradle is an interesting and new type of hybrid device developed for a specific clinical indication. While it may not be used with the same frequency as, say, a medical calculator app, the possibility of benefit to the affected patient may turn out to be quite large. Stay tuned next week as we will present an interview with the inventor of the CPR Cradle, Dr. Ivor Kovic