Glaucoma Handbook is an iPhone/iPad app whose production was directed by glaucoma specialist Dr. Jaewan Choi.

Dr. Choi wrote that he produced the app in order to dispel common myths and misconceptions about this insidious and dangerous eye disease which left untreated can lead to blindness.

From the first screen which tells us that Ray Charles lost his eyesight because of glaucoma, Dr. Choi aims the application at patients who live with the disease but do not always seem to understand it. As a young doctor, he said he sometimes used to privately wonder

Why don’t my patients understand my explanations ?

Over time, he realized that patients cannot absorb all the information in a few brief office visits, and that the various websites and articles to which he referred them often went unvisited as patients do not carry their computers with them. That is, until the arrival of the iPhone, which he said has “given medical doctors an excellent way of communicating with patients”.

Thus Glaucoma Handbook (iTunes link) was born. The applications has a list of contents consisting of common questions and answers about glaucoma as well as a “links” page pointing to Wikipedia, Pubmed and Google News on glaucoma. It also has links to glaucoma foundations in the US, Canada, Europe and Asia. 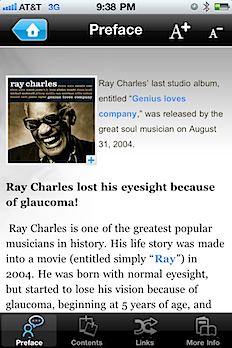 The app also incorporates links for sharing on Twitter and Facebook as well as a call for authors to contribute to future development of app content. Kudos to Dr. Choi for turning his frustration into a useful medical application that will hopefully help many patients.