We could not miss the chance to highlight the first (we believe) animal dissection app for the iPad. Frog Dissection by Punflay shows you, in about a dozen quick steps, how to open up the abdomen and chest of a frog and see what the various organs are.

The app has already garnered the PETA Mark Twain Ethical Science award. We are not sure if this will start a new venue of competition among medical app developers but it certainly shows off the different ways in which medical education and a tablet device could converge.

We were impressed by the quality of the images on the app, some of which are shown here. The app is very easy to use and the various stages of dissection can easily be grasped. Once the dissection steps are finished, a series of screes show beautiful 3d representations of the viscera with useful text descriptions. 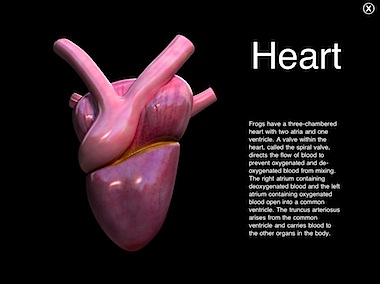 The main drawback is that the dissection only goes in one direction and animations are not really user controlled. Meaning, the dissection knife, for example, only goes in one direction and in one order. In that sense, it is not really a “dissection” but rather a series of animations that culminate in the organs being displayed. In the future, it would be interesting if the dissection could be done “wrong” or if the organs can be taken out and replaced in different orders. [iTunes link]